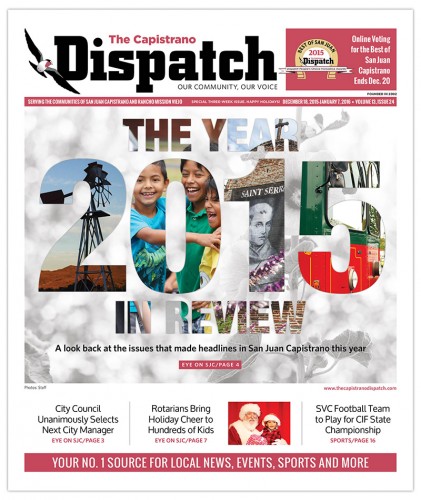 Not unlike years past, it’s been a turbulent and fruitful 12 months in San Juan Capistrano, filled with hotel proposals, lawsuits, a designated skatepark location and the completion of the Interstate 5/Ortega Highway interchange. San Juan was often thrust into the spotlight, with major events such as the groundbreaking ruling rejecting the city’s tiered water rates system and the canonization of Father Junípero Serra by Pope Francis.

So before we step into the New Year, let’s take a look back at some of the biggest stories of 2015.

Maricela Sanchez, 20; her 3-year-old son, Jaiden Liborio; and her 2-year-old son, Iker Liborio, died from injuries after their condo caught fire on La Zanja Street on Jan. 20. A total of 17 people were living in the four-bedroom condo at the time. Investigators believed a child started the fire while playing with a lighter in the living room; no smoke alarms were found in the unit. The tragic incident led to hundreds of smoke alarms being distributed by city volunteers throughout the following months.

The City Council voted 4-1 to repeal approval of the Urban Village Hotel & Villas project, which was approved by the previous council on Nov. 19. A referendum opposing the project’s approval placed it back before the dais after validation by the Registrar of Voters. Urban Village’s legal representation maintained that because the hotel’s approvals were administrative and not legislative, the referendum was illegal.

Former Councilman Roy Byrnes announced his retirement from the dais on Jan. 20. A 55-year resident of San Juan, Byrnes served multiple terms as mayor. The City Council appointed John Perry to fill the vacancy. As a founding board member of the Capistrano Taxpayers Association, Perry had previously sued the city over its tiered water rates in 2012 and helped organize a failed recall effort against then-mayor Sam Allevato in 2013.

Mission San Juan Capistrano launched its “Hope for the Pope,” campaign, an effort aimed to bring Pope Francis to San Juan Capistrano in honor of Fr. Junípero Serra’s canonization in September. While the Pope did not travel to California, the Mission’s Executive Director Mechelle Lawrence Adams had hoped that he would visit the Serra Chapel—the only chapel still standing where Fr. Serra celebrated mass.

After the City Council voted in December to overturn the Laguna Glen retirement facility previously approved on the Vermeulen property, Spieker Senior Development announced a new location for the project outside city limits in Rancho Mission Viejo, on a 60-acre site across from Reata Park. The new development, called Reata Glen, will be similar in size, design and amenities compared to the previous Laguna Glen proposal. The move saved Spieker almost $15 million in developer’s fees that Laguna Glen would have paid the city of San Juan Capistrano.

The Orange County District Attorney’s Office began investigating allegations of criminal misconduct in the referendum that resulted in the City Council overturning the approval of the Urban Village Hotel & Villas project. Critics of the referendum said opponents of the hotel and villas had distributed misinformation in order to get petition signatures.

Plans were revived for a hotel across from the Mission—a site that was previously approved for the failed Plaza Banderas hotel project. Rivendell Land Company, owned by Bill Griffith, purchased the property, which included an existing development entitlement from the 2011 Plaza Bandera project with approvals for a 124-room hotel and two commercial buildings. Rivendell announced in August that Marriott International will operate the Mission Inn San Juan Capistrano.

After months of severe drought, Gov. Edmund “Jerry” Brown announced on April 1 that the state would be putting in place mandatory water reductions in cities across the state in order to cut water usage by approximately 25 percent. The mandate translated to a total potable water reduction of 28 percent in San Juan Capistrano.

On April 20, the California 4th District Court of Appeals ruled that San Juan Capistrano’s 2010 tiered water rate system was unconstitutional and did not sufficiently show that each tier was based on usage and the actual cost of water delivery. Water agencies across the state paid attention to the ruling, which critics—including the governor—have said is negatively impacting cities’ ability to utilize tiered rate systems to encourage residents to conserve water during California’s ongoing drought.

After filing a request for a rehearing of the tiered water rates case in order to “correct the court record,” the city of San Juan Capistrano subsequently settled the lawsuit. The City Council approved a refund/credit process on June 2 for tier 2, 3, and 4 water customers who paid the city’s previous water rates. On Aug. 4, the council added another $320,000 to water ratepayers’ refunds in order to account for 10 percent interest during the Aug. 28, 2013, to July 1, 2014, refund period.

Citywide water conservation measures were approved by the City Council on May 5. Cutbacks include reducing turf watering to two days per week and not watering during or within 48 hours of measurable rainfall. The city ceased watering on city medians, parkways and neighborhood parks, began issuing report cards to water customers and reached out to the largest water consumers to develop action plans.

On June 2, the City Council adopted an urgency ordinance amending water shortage stages, prohibitions and penalties, and approved the use of penalty revenues to help fund incentive and conservation education programs. The city is subject to a $10,000 per day fine if it does not comply with the State Water Resources Control Board’s 28 percent citywide reduction.

A proposal for a Kimpton hotel situated between the Egan House and the Esslinger Building in downtown San Juan came before the City Council. The boutique hotel is planned for a plot of land owned by local movie producer Steve Oedekerk, who previously worked with developer Urban Village on the San Juan Hotel & Villas project. Oedekerk and Kimpton representatives eliminated elements from the proposed hotel that were snubbed by opponents of the previous project, such as the villas component and the hotel’s proximity to the Egan House. Due to discrepancies concerning new development between the city’s Historic Town Center Master Plan and the General Plan, the council asked the Planning Commission to return with recommendations for amendments to the HTC master plan within six months.

A lawsuit was filed against the City Council on July 16 by the Vermeulens, a longtime farming family with property off of Del Obispo Street, and Spieker Senior Development, LLC, a company that had hoped to place the Laguna Glen senior development, and subsequently a residential community, on the Vermeulens’ 34-acre parcel of land. The plaintiffs claim that the city has denied the Vermeulens’ property rights and are seeking just compensation. An Orange County Superior Court judge recently issued a tentative ruling allowing all but one of the plaintiffs’ claims to go on to court.

In order to accommodate a growing student population, the Capistrano Unified School District Board of Trustees voted to invest about $15 million in improvements for San Juan Hills High School. CUSD will construct a two-story building on campus to add permanent classrooms, as well as 87 additional parking spaces.

The City Council approved the site for a skatepark in San Juan Capistrano on Aug. 11. The approved location will harbor a 20,000-square-foot Capistrano Grind skatepark at the northwest end of the San Juan Capistrano Sports Park, located near the Boys & Girls Clubs of Capistrano Valley, Del Obispo Elementary and Marco Forster Middle School. Fundraising efforts are now underway.

After roughly two and a half years of construction, the Ortega Highway/Interstate 5 Interchange Improvement Project was completed Sept. 4. South Orange County officials gathered Oct. 1 to celebrate the completion of the $77.2 million project.

Saint Junípero Serra was canonized by Pope Francis on Sept. 23.

A group of residents living in El Nido Mobile Estates turned to the city for answers in May following a notification from their property owner of a $641 monthly rent increase—which doubled rent for some residents—beginning Sept. 1. A city hearing in August resulted in a favorable ruling for the residents, and on Oct. 26 the City Council voted to reverse the $641 rent  increase, approve a $37 per month increase instead and mandated the park owner refund the additional rent charged in September and October.

Developer-funded improvements for the San Juan Creek Trail extension—a 1,000-foot dirt stretch of a multiuse trail adjacent to the incoming The Oaks development—stalled after being discussed for several months by the Trails and Equestrian Commission. The City Council approved renovations to the trail in conjunction with The Oaks development in 2014, including a Class 1 paved bike trail and an unpaved multiuse hiking/biking/equestrian trail. The City Council discussed the issue in November and agreed to bring the item back on Jan. 19. The council asked that the developer be able to continue with his work with the exception of the trail in the meantime.