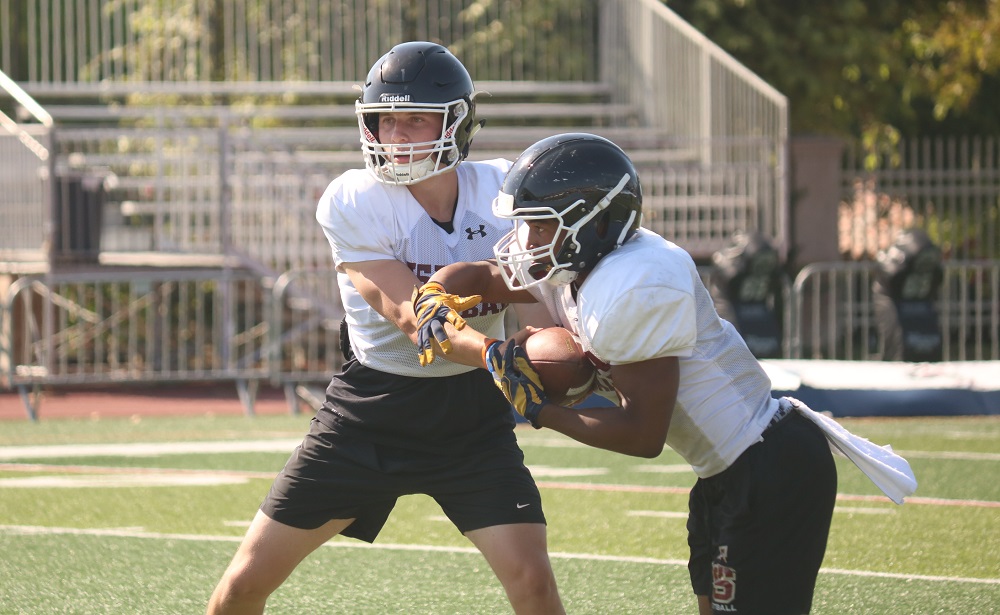 2018 Football Preview: Impact Transfers Could Push JSerra Over the Top

In our annual San Juan Capistrano high school football preview, we delve into everything you need to know about the upcoming JSerra season. Scroll through the PDF version above for more photos and interviews.

JSerra finds itself in the same tough spot as many in CIF-SS’ Division 1.

Unless things really go off the rails in their nonleague schedule, the Lions are going to make the playoffs in one of the toughest high school football playoff divisions in the country and take on some of the great heavyweights and traditional powers of the sport.

JSerra, currently ranked No. 9 in Division 1, has advanced to the second round just once in their history, 2014, and fell to Long Beach Poly in a first-round shootout last season, 60-44.

The Lions get that benefit of the doubt because they also play in what might be the toughest high school football league in the country, the Trinity League, with reigning national, state, CIF-SS and league champion Mater Dei as well as nationally ranked, Division 1 and league runner-up St. John Bosco at the top.

So JSerra has no choice. It has to upset the status quo.

“Success level for us is to win the Trinity League,” JSerra coach Pat Harlow said. “That’s our goal. Of course, that’s every team’s goal. What I tell our kids is no matter who you’re playing, they’re still high school kids just like you.”

The Lions may be on their way to it as they secured two of the biggest offseason moves in the Trinity League in former Servite quarterback Caden Bell and former Mater Dei running back Chris Street.

JSerra’s offense was already flush with talent on the edges with their top three receivers from 2017, juniors Tarik Luckett, Tyler Shimomura and Munir McClain, returning. The additions of the dual-threat Bell and the dynamic Street make the Lions a scoring threat at any time and any position.

“I think we can possibly have one of the most explosive offenses in the country,” Bell said before the season. “As we showed in the Norco scrimmage, we had multiple one-play touchdowns, 60-70 yard touchdowns. That’s definitely going to be big for us, making big plays and keeping defenses on their heels.”

In their season-opening 49-7 win over Corona del Mar, Street rushed for 110 yards on 10 carries with a 39-yard touchdown and Luckett caught three passes for 82 yards and two touchdowns.

“We’re close,” Street said. “We’re not quite there yet, but I think as soon as we gel together more and really trust each other, I think that’s when we’re going to be great.”

On defense, the Lions are adaptable and deep, especially on the defensive line with seniors Etuate Moala, Shawn Nielsen and Grant Ristoff. In the opener against Corona del Mar, senior Calvin Mouisset made plays in the secondary with eight tackles and blocked a punt to push JSerra.

JSerra has established itself and has the talent to take on its gauntlet of a schedule.

“We’ve got to play our best every week,” Harlow said. “We’re not sneaking up on anybody anymore. In the past, people used to look past us. People know we’re going to come ready to play. I think we’ve got enough to compete with those guys and we’ll find out if we win on that Friday night.”