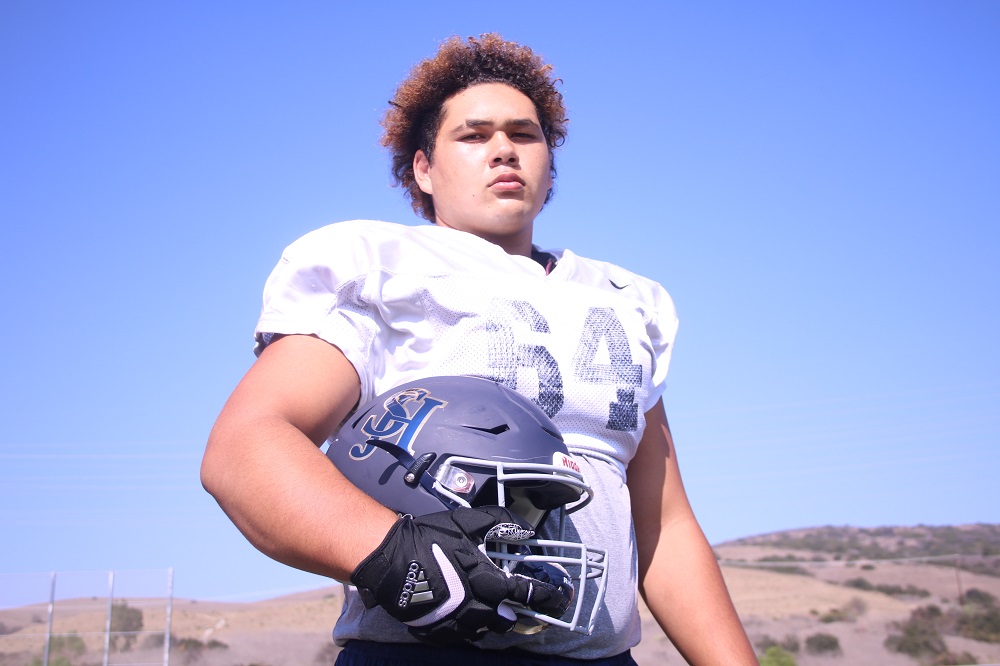 In our annual San Juan Capistrano high school football preview, we delve into everything you need to know about the upcoming football season. Scroll through the PDF version above for more photos and interviews.

At 6-foot-5 and 315 lbs., you can’t miss Rhyan holding down the Stallions offensive line. The senior four-star tackle currently has 13 college offers including 10 Pac-12 schools along with Alabama, Nebraska and Notre Dame. Rhyan bench-pressed 185 lbs. 24 times in one minute at the Huntington Beach lineman competition.

Bell’s transfer from Servite to JSerra was one of the biggest moves of the summer. Bell is a dual threat that can lead the Lions passing attack and run when given the space. Bell threw for 103 yards and two touchdowns and rushed for another 20 yards and another TD in JSerra’s opener.

Mott had an explosive 2017 campaign in his first season as the Tartans’ full-time starter. Mott completed over 61 percent of his passes for 2,800 yards and 33 touchdowns as St. Margaret’s advanced to the Division 7 semifinals. The Tartans’ opener was a defensive slugfest, but the offense will find its gear with Mott.

Allen is another in the string of solid but under-the-radar quarterbacks for SVC. Allen completed nearly 53 percent of his passes last season for 1,661 yards and 14 touchdowns. Another year with the reins of the offense pulled by coach Brendan Chambers, a former SVC quarterback himself, has Allen ready for success.

Henry has the speed to produce points whenever he touches the football. He was one of the Eagles’ top passing targets last season, and, in CVC’s opener, Henry caught only two passes but each went for touchdowns of 82 yards and 32 yards. Like most of the Eagles, Henry also pulls his weight on defense.

Albright will be an athletic key on the Stallions defensive line. He’s got size at 6-foot-5, 215 lbs., but Albright also has the speed to get into the backfield. Albright was third on the Stallions in 2017 with 13 tackles for loss, and he recorded two sacks in San Juan Hills’ opener.

Mouisset is used in a lot of different ways for the Lions, including as part of the secondary where Coach Pat Harlow called Mouisset “the glue” that keeps the defense together. Mouisset made 24 tackles for JSerra last season, and his punt block in JSerra’s opener sparked a scoring run.

Todd was injured in the opening game of the 2017 season and missed the entire campaign. Todd recovered to have another monster lacrosse season and is primed for a big year in 2018. He’s strong at 6-foot-1, 210 lbs. and will also spend time at running back for the Tartans’ offense.

Seltzer is a truck at 6-feet, 225 lbs. and uses his physicality and speed to patrol the Warriors defense. Seltzer recorded 49 tackles last season for SVC in seven games, including 5.5 tackles for a loss and a sack. Seltzer suffered an injury in the SVC opener but will return quickly.

Roberts is a go-to guy for the Eagles on both sides of the football. Roberts leads the defense from his middle linebacker spot and recorded a team-high 89 tackles in 2017. He led the team with 13 tackles in their season-opening win. Roberts also does double duty as a running back.