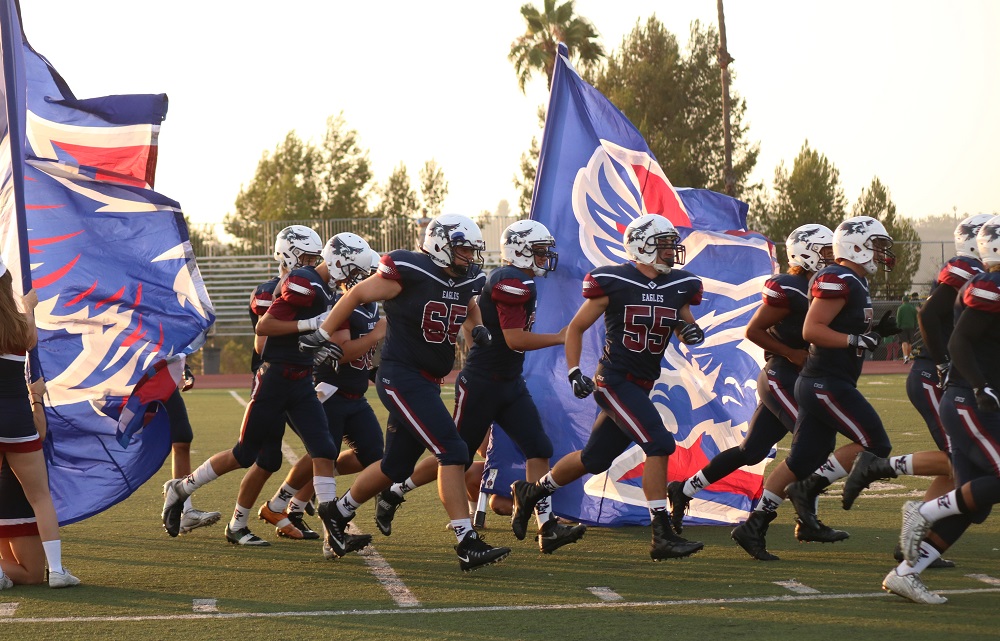 In our annual San Juan Capistrano high school football preview, we delve into everything you need to know about the upcoming Capistrano Valley Christian season. Scroll through the PDF version above for more photos and interviews.

Capistrano Valley Christian made incremental improvements in Coach Rick Curtis’ second season at the helm in 2017 with a one-win improvement in the Eagles overall (3-7) and league records (1-4).

And while roster numbers continued to trend downward, prospects for the 2018 CVC season are looking upward.

CVC essentially switches places with St. Margaret’s going from the San Joaquin League to the reorganized Academy League, but it’s a huge change for the Eagles and gets them on equal footing.

The entire Academy League line-up – CVC, Fairmont Prep, Firebaugh, Trinity Classical Academy and Ribet Academy – are all Division 13 schools with no more than 26 players listed on their rosters.

“We expect to win a league championship,” Curtis said. “That’s our goal. I think we have a good shot at it based on the realignment of the league and the teams we’re playing.”

Twelve of the 22 players on the Eagles roster are seniors, including key players like Jack Roberts, Trey Henry and Seth Yu.

“We have a good senior group,” Curtis said. “For a lot of them this is their third year playing with us. We’re excited about our senior class.”

One key senior missing is last year’s starting quarterback, Zach Alessi, who will be out until midseason with a health issue. Alessi threw for 1,093 yards and 11 touchdowns as a junior.

Stepping in at quarterback is junior Tyler Henry. Henry passed his first test in CVC’s season-opening overtime win over St. Monica, 19-13. Henry completed 11 of 20 passes for 202 yards and three touchdowns.

The majority of the yards came from Tyler’s brother Trey, who only had two receptions but both went for touchdowns of 82 and 32 yards. In 2017, Trey caught 36 passes for 354 yards and three touchdowns.

Junior receiver Simeon Marton caught seven passes for 73 yards and the game-winning touchdown in overtime. Curtis called Marton one of the best athletes CVC has.

The focal point for any team playing the Eagles will be Roberts, who will pull double duty at middle linebacker and running back. Roberts was far and away CVC’s leading rusher and tackler in 2017 with 1,037 yards rushing and 89 tackles.

Roberts pulled in 13 total tackles with 11 solo tackles in the Eagles’ season opener.

Roberts is a team captain along with Yu and senior Christian Harris, who recovered two fumbles in the opener. The captains are emblematic of a group that has come along under Curtis’ tenure.