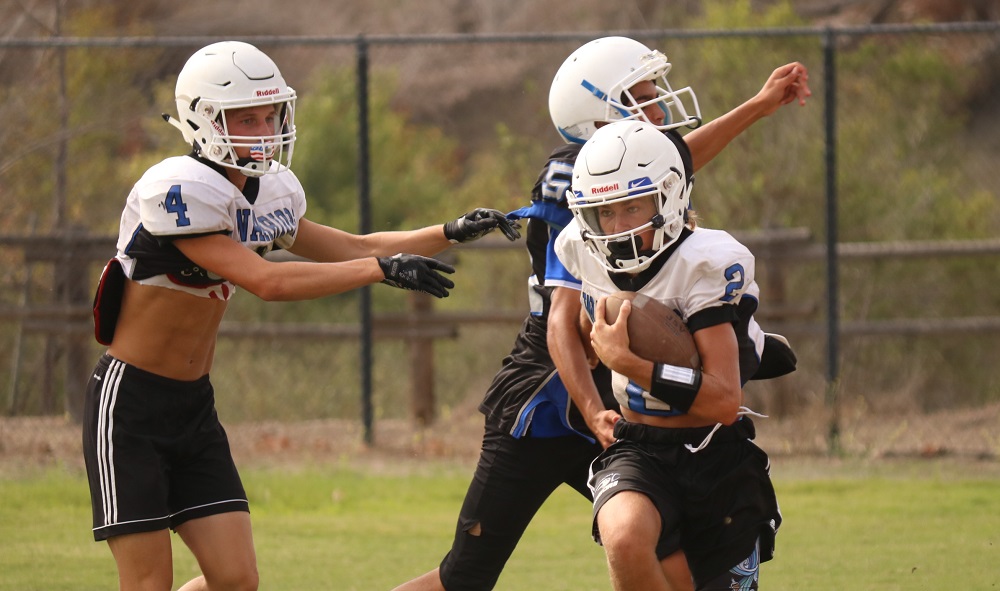 In our annual San Juan Capistrano high school football preview, we delve into everything you need to know about the upcoming Saddleback Valley Christian season. Scroll through the PDF version above for more photos and interviews.

For the first time in 12 seasons, the Warriors are not the defending league champions. Their streak of 11 straight was snapped with a third-place finish last year in the San Joaquin League.

The San Joaquin League will have a new champion again this season as the league pairs down from six teams to four, defending league champion Santa Clarita Christian exits and the Warriors exchange city-rival Capistrano Valley Christian for a new San Juan foe in St. Margaret’s.

While the schedule wasn’t built with this league or these roster numbers in mind, SVC is in position to build towards that challenge. The Warriors non-league schedule resembles that of any of the local public schools with Northwood, Crean Lutheran, Trabuco Hills, Laguna Hills and El Toro lining up for the first half of games.

“I scheduled that before I knew what we’d have,” Chambers said, “but at the same time, if you look at St. Margaret’s MaxPreps state ranking, it’s better than Trabuco, better than Laguna, right behind El Toro. We’ve got to prepare ourselves for playing them.”

Chambers told the group it’s “hands down” the hardest schedule SVC has ever tackled. However, if the Warriors can fight through and capture a playoff spot in Division 12, they will be battle-tested.

In the past, SVC has been known for its offensive prowess, but for the first time in a while, the Warriors will be led by their defense. SVC returns most of its defensive starters from a year ago, including most of its linebackers.

“Our defense will have to carry us, especially early on,” Chambers said. “Having Donte Seltzer here, who’s been here for four years and been the leader of that defense for three years now will be huge for us. They’ll keep us in the ball game.”

Seltzer pulled in 49 tackles as a junior last season and 5.5 tackles for loss. Seltzer suffered an injury in SVC’s opening loss to Northwood on Aug. 17, 21-8, but he will return to the line-up quickly.

On offense, Mason Allen returns for his senior season at quarterback. As a junior, Allen completed nearly 53 percent of his passes for 1,661 yards and 14 touchdowns.

“For the last two years, we haven’t been able to do that,” Chambers said of the running game. “Two years ago, we had Cade Henjum who could scramble and create those plays on his own. Last year with Mason, he’s not that type of quarterback. He’s more of a pocket passer. So finding ways, like putting in a tight end where we get an extra blocker down in there to take a little bit of pressure off Mason so he doesn’t have to throw 50-60 times a game.”