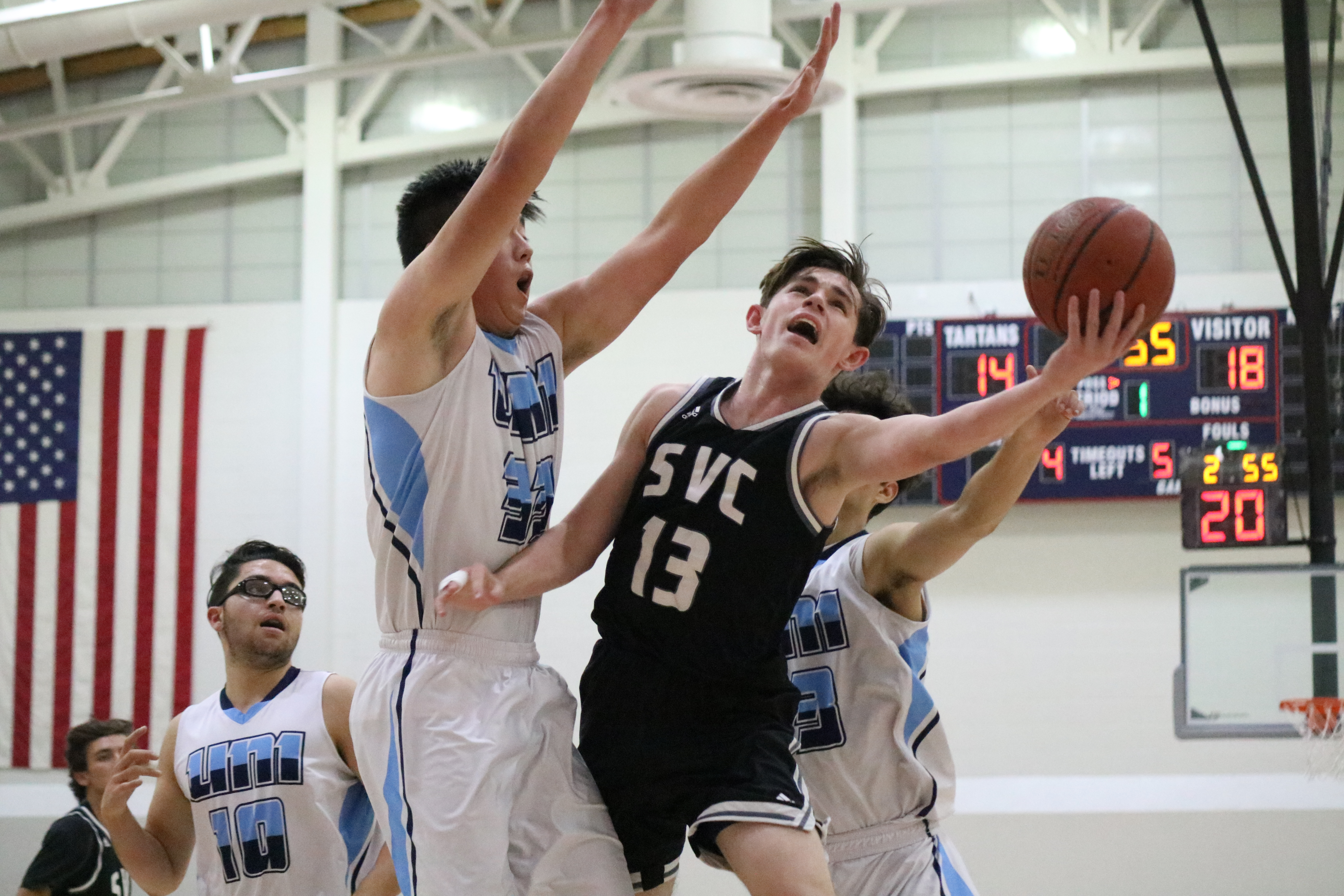 The winter sports season is well underway as the bump-up of the CIF calendar extends to the fields, pools, courts and mats. In our annual preview, we highlight some of the winter sports programs at San Juan Capistrano’s five high schools as they enter the holiday tournament season and approach league play in the new year.

For in-game updates, scores, news and more for all of the San Juan Capistrano high school sports programs, follow us on Twitter @SouthOCSports.

Junior guard Adam Weingard has emerged as the team’s leading scorer with over 20 points per game. Weingard has shooting ability and, at 6-foot-4, can also drive inside for points, rebounds and to draw contact.

Albright uses his sensibilities as one of the better defensive football players in Orange County to be a monster rebounder, and he isn’t afraid to dive on a loose ball.

Efstathiou also praised sophomore Niko Trimino as the starting point guard and senior guard Jacob Gillis as the most experienced of his group. Junior guard Cooper Kitaen will also be a strong contributor.

The Stallions have a strong tournament schedule and difficult nonleague dates including a trip to JSerra on Jan. 4. Efstathiou said he purposefully schedules strong, and his teams usually are pretty solid once they hit league play.

The San Juan Hills girls basketball team did not close out last season the way they wanted.

However, with one more year of experience, a new coach and a move into the Sea View League, San Juan Hills is ready to change its fortunes.

Paul Edwards takes over the reigns as former coach Nicole Riscica takes the same position at St. Margaret’s, and Edwards inherits a team with its top players returning.

Leading rebounder Grace Gentry also returns as a junior and is leading the team again at 10.6 rebounds per game. Gentry and senior Jordan Parkhurst have both stepped up their scoring output to fill in the few graduated spots.

San Juan Hills went 8-17 overall last season, but the Stallions are already near that season victory total with an early 6-3 record through tournament play.

JSerra is one of the strongest boys basketball teams in South Orange County, and the Lions aren’t short of storylines.

The Lions have a new coach in Keith Wilkinson. Former coach Zach Brogdon quickly raised JSerra in the Trinity League standings in his two years at the helm before retiring to become a youth pastor in Idaho.

Wilkinson comes in with Division 1 college experience with five years as an assistant at UC Riverside and was also an assistant at University of Texas-El Paso. Wilkinson played for Capistrano Valley and USC and in Ukraine before beginning his coaching career.

Wilkinson takes over a talented roster that starts with its returning leading scorer in D.J. Rodman. Rodman, a senior listed at 6-foot-5, 208 lbs., led the team in scoring as a junior at 16.1 points per game and was its leading 3-point and free-throw shooter.

The Lions also get some impact transfers, including junior guard Ian Martinez, who is already making a strong impact. Martinez possesses an all-around athletic game and already has attracted offers from Pac-12 schools. JSerra will also get 6-foot-11 junior center Hugo Clarkin on the roster when the transfer sit-out period ends on Dec. 23.

JSerra battled in the Trinity League the last two seasons and posted 5-5 records each year, but with some dynamic scorers and the energy of a new coach, the Lions could be primed for much bigger success.

JSerra is 8-0 on the season and opens Trinity League play on Jan. 9.

Coming off back-to-back CIF-SS titles and back-to-back CIF SoCal Regional Final appearances highlighted by a title in 2017, the JSerra girls soccer team has been near or at the top of the national rankings throughout this run, including a No. 3 ranking by USA Today to open this season.

On top of all of that, JSerra has the national player of the year, Isabella D’Aquila, on its roster as well.

So as the Lions enter the 2018-19 season, their expectations are the same as always: to win.

While JSerra has talent up and down the field, the focus centers on D’Aquila as she enters her senior season.

Last season, D’Aquila scored 39 goals with 15 assists and was named the Gatorade State and National Girls Soccer Player of the Year. D’Aquila, who signed on to play at Santa Clara University, is also coming off a recent trip to the U17 Women’s World Cup.

D’Aquila is a star, but JSerra’s biggest strength might be its defense.

Juniors Jordyn Gather, Kendyll Fritts and Rachel Bastone have been as solid as any backline you can find and also possess expert passing ability and the dynamic talent to jump-start an offensive push.

They clear the way in front of junior goalkeeper Ryan Campbell, who has been a rock for the Lions since starting as a freshman. Campbell allowed only four goals in eight playoff games and posted four shutouts, including the CIF-SS title game.

Junior forward Samantha Williams is also a strong scoring option and has developed a strong chemistry with D’Aquila.

JSerra is 3-0 on the season and opens Trinity League play on Jan. 8 against Rosary.

The St. Margaret’s girls soccer team graduated a couple of impact seniors, but the Tartans had plenty of contributions from young players last season that will only be better with experience.

The Tartans allowed only 12 goals in 26 games last season and posted 22 shutouts in those games. St. Margaret’s easily went 12-0 in the Academy League without allowing a goal and didn’t allow a goal in the playoffs until their loss in the CIF-SS Division 4 semifinals.

As dominant as the Tartans were, the loss in the semifinals was a disappointing one, and it’s a loss they hope to avenge this season.

Bryce Chan showed incredible promise last season as a freshman, including a hat trick in the playoffs, and returns as a sophomore to put even more in the net.

Seniors Andi Carnell and Lauren Otterbein also return in the midfield as part of the engine that makes the Tartan machine work.

Kennedy Barlow also returns in net as a junior, and the Tartans have already posted three shutouts in four games this season.

St. Margaret’s is 2-0-2 to start the year and opens the new San Joaquin League on Dec. 11 at Pacifica Christian.

Coming off of a league title in the San Joaquin League, the Capistrano Valley Christian boys basketball team has some graduation holes to fill, but so far, the Eagles are doing so nicely.

CVC went on an incredibly strong run in Coach Chris Childress’ first year at the helm with an 11-game win streak and a run of 15 wins in 16 games. However, the Eagles lost three of their top four scorers.

The one of that top four who returns is senior Festus Ndumanya, who was second on the team in scoring last season and the Eagles’ top rebounder.

Through six games, Ndumanya, a 6-foot-7 center, has proven to again be a force inside and is averaging a double-double with team-highs at 22 points per game and 13.7 rebounds per game.

The Eagles are 4-2 to open the season and host their own CVCS Eagle Classic next week. CVC opens that tournament on Dec. 11 against Portola.

The Warriors’ head coach left at midseason, but the team was able to rally and compete for a league championship. However, the Warriors were hit with an ineligible player ruling, and the ensuing forfeits cost the Warriors a league title and a playoff berth.

Now, by graduation or other movement, SVC entered the season without any of its top six scorers from a year ago and only two players that had scored a point for the Warriors last season.

Coach Josh Markum, who took over at midseason last year and was named the permanent head coach ahead of this season, has turned the focus inward for his young group.

“We’ve kept it simple,” Markum said. “Kids are resilient. “We’ve just kept it on basketball, focused on us, focused on our group and building culture. We always talk about love, family and toughness. We feel like if we focus on those three things, we have a good chance against anybody.”

The two returning point scorers are sophomore twins Aidan and Gavin O’Neill. Both have stepped up into their new roles as top scorers for the Warriors. SVC has also gotten production from two freshmen, Ethan Rimando and Justin Davis.

SVC is 5-4 through the early tournament season as the Warriors prep for a deceptively tough San Joaquin League. The Warriors open league play on Dec. 11 at Fairmont Prep.