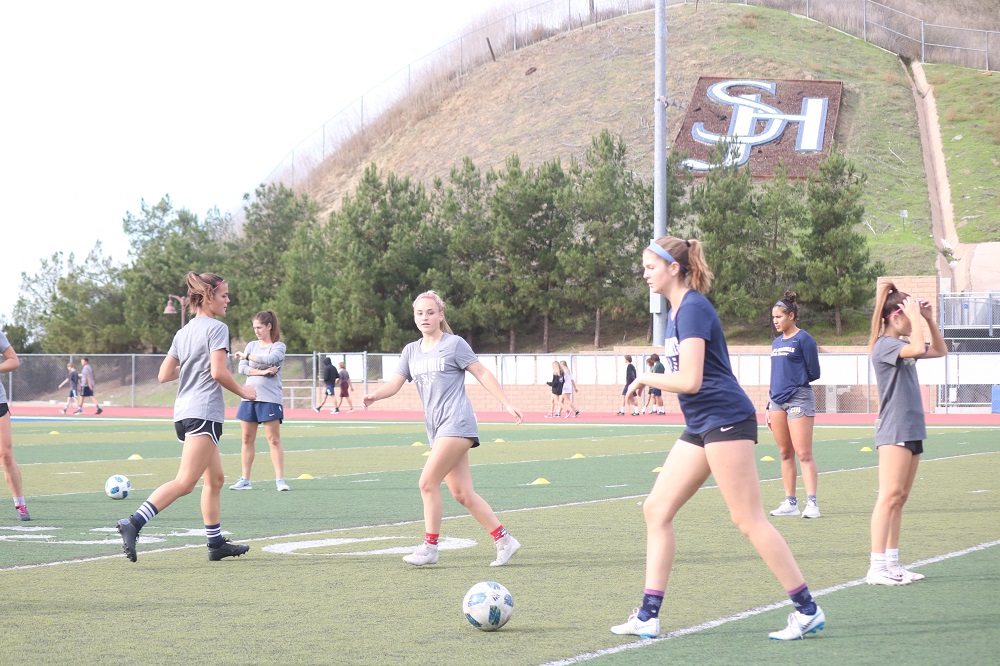 As we count down the days to the holidays, the winter sports season is well underway across the CIF-Southern Section.

In our annual preview, we highlight a handful of the winter sports programs at San Juan Capistrano’s five high schools from the court, to the field, to the pool and to the mat as teams enter the tournament season while looking ahead to league play on the other side of the new year.

There has been a steady progression over the past few seasons for San Juan Hills girls soccer.

Now the Stallions, packed with 18 seniors, are looking to make another breakthrough in the South Coast League and possibly beyond.

“Every year, it’s trying to get better,” San Juan Hills coach Farrel Moore said. “I think they’re a really unique group in that there’s so many of them that have all grown up together. They’re excited to go through this journey together and see it through.”

San Juan Hills was more than competitive in its first season in the South Coast League, but the Stallions lacked the extra scoring touch at times in league play. San Juan Hills scored only six goals in league play—four in one win over Tesoro—and played to five scoreless draws in league, including both games against league champion Aliso Niguel.

Moore believes the extra year of experience and more confidence in front of the goal will help the Stallions get over that hump.

Chico State-bound Mikayla Robertson returns for her senior season after leading San Juan Hills in goals last season. Moore said that the addition of the dynamic Sophie Wright to the midfield will give San Juan Hills a spark as well.

San Juan Hills opened the season at No. 8 in the Division 1 poll, but fell out after a 1-3 start. However, the Stallions were again close and competitive in 1-0 losses to No. 3 Harvard-Westlake and No. 2 Los Alamitos.

San Juan Hills opens league play at Dana Hills on Jan. 7 and hosts San Clemente on Jan. 9. The Stallions play at Aliso Niguel on Jan. 11 and host the Wolverines on Jan. 28.

The San Juan Hills girls basketball team was led by senior performers last year in a run to the Sea View League title and to the CIF-SS quarterfinals while posting the program’s second 20-win season.

This season, the Stallions are led by one impact senior and a youth movement that has come to play.

Senior Grace Gentry is a can’t-miss player for the Stallions and is at the front of their efforts each and every game. San Juan Hills lost its top two scorers to graduation, and Gentry was the third-leading scorer last season. So far, Gentry is averaging a double-double with 16.1 points per game and 13.9 rebounds per game.

Junior Emily Freeman is next up, averaging 9.8 points per game and 4.6 rebounds and leads the Stallions with 19 three-pointers made.

After Freeman, it’s the youth leading the way with three freshmen and a sophomore. Freshman Amanda Edwards is scoring 7.8 points per game, and freshman Lily Sisson is averaging 7 points per game. Both are shooting 33% on three-point shots.

San Juan Hills has been up and down during the tournament season with a record of 5-4. Curiously, the Stallions are 0-3 when Gentry has scored 20 points or more and 5-1 in more balanced efforts.

San Juan Hills is currently ranked No. 10 in Division 3AA.

As it goes for JSerra in plenty of sports, the Lions boys basketball team would thoroughly dominate any other league in Orange County, but they’re in the dogfight that is the Trinity League.

Taking down Mater Dei may be a tough task, but there’s no question that JSerra will make an impact in the Trinity League, with a possible run for an Open Division playoff spot or the top of Division 1.

“We’re always going to compete and put our best foot forward,” JSerra coach Keith Wilkinson said. “Mater Dei has been good for a long dang time, I’ve got a ton of respect for them, but we’re coming after them. We’re going to do everything we can to get into that upper echelon, and I’ll take my group every day of the week.”

The leader of that effort is Utah-bound Ian Martinez. Martinez is averaging well over 20 points a game for the Lions. In addition to being able to leap out of the gym and get to the rim whenever he wants, the 6-foot-7 Martinez has worked on his outside shooting and is a tenacious defender.

“He’s a matchup nightmare. He’s got a chance—and I don’t say this often, because I’ve played with so many good ones—kid’s got a chance to have a future playing in the NBA if he keeps progressing.”

The Lions are also bolstered down low with 6-foot-11, 250-pound senior Francesco Borra from Italy and 7-foot, 205-pound Hugo Clarkin, who has signed with San Jose State.

“I think we’re deeper,” Wilkinson said. “Last year, we probably were about seven-deep. This year, honestly, we can go 11 or 12 deep and have guys that can really play.”

JSerra is ranked No. 10 in Division 1 and is 7-2 on the season. The Lions continue in the CVCS Eagle Classic this week and the Torrey Pines Holiday Classic after Christmas.

JSerra opens Trinity League play at home against Santa Margarita on Jan. 8. The Lions play at Mater Dei on Jan. 22 and host the Monarchs in the season finale on Feb. 6.

The JSerra girls soccer team is the definition of soccer excellence in Orange County, the CIF-SS, California and quite possibly the entire nation.

Last season, the Lions went unbeaten at 22-0-3 to win their third straight CIF-SS Division 1 title, second CIF Southern California Regional title in three years and finished the season ranked No. 1 in the nation by USA Today.

Over those three CIF-SS championship seasons, the shining star had been Isabella D’Aquila, a US National Team player with numerous player of the year accolades on the local, state and national levels. With her legendary high school career over and D’Aquila playing in college at Santa Clara, some might wonder if that spells the end of the JSerra dynasty.

Outside of D’Aquila, almost all of JSerra’s starters were juniors, so that means the Lions are once again stacked and ready to dominate Southern California.

Junior Abby Lynch has led the scoring this season with six goals. Carter is right behind with five goals. Williams and junior Presley Easton have three goals each.

The St. Margaret’s soccer team has new leadership, but a solid core remains from last season’s playoff run to keep the Tartans in position for success.

Last season, St. Margaret’s lost the CIF-SS Division 4 title in a bizarre penalty shootout at La Salle, but the Tartans got revenge in the regional playoffs with a 2-1 win at La Salle for the Southern California championship.

St. Margaret’s is the consensus favorite in the San Joaquin League after a dominant run last year. The Tartans did not allow a goal in league play and outscored their opponents by a collective 43-0 score.

Last season was a historic run for the Capistrano Valley Christian boys basketball team, as the Eagles won their first CIF-SS championship and set a program high in wins with 26.

CVC will take a dip after losing three of its top four scorers from last season, but the Eagles still have plenty of talent to compete and youth to continue to build the program.

“It depends on when we click,” CVC coach Chris Childress said. “And if we click at the right time, I think we can make some noise. Right now, I’m just trying to lay the foundation for this group. I think they’re going to be special for years to come.”

Senior Luke Powell is the top returner for the Eagles and is averaging 16.7 points to open the season. Junior Addyson Gbye and sophomore Bence Duka are both averaging double figures with 13.8 points and 11.7 points, respectively.

Duka is the big man at 6-foot-8 and added 10 pounds of muscle over the offseason.

CVC has a strong group of young players, and a standout is 6-foot-7 Athian Athian.

“I think we have a little more balance,” Childress said. “We’re picking it up on the defensive end. We’re trying to guard a little better and getting after it.”

The Saddleback Valley Christian girls soccer team is already bouncing back after a disappointing 2018-19 season.

SVC won its first four games of the season: a 5-0 shutout of Tarbut V’ Torah, a 2-1 win at Crean Lutheran, a 6-1 win over Calvary Chapel and a 5-3 win at Whittier Christian.

Senior standout midfielder Alexa Vernola has led the way for the Warriors.

SVC has a tough league, with St. Margaret’s at the top and Sage Hill and Pacifica Christian right behind. However, a strong start could have the Warriors right in the playoff mix.

SVC opens league play against Southlands Christian on Dec. 19. The Warriors play at St. Margaret’s on Jan. 14 and host Sage Hill on Jan. 16.