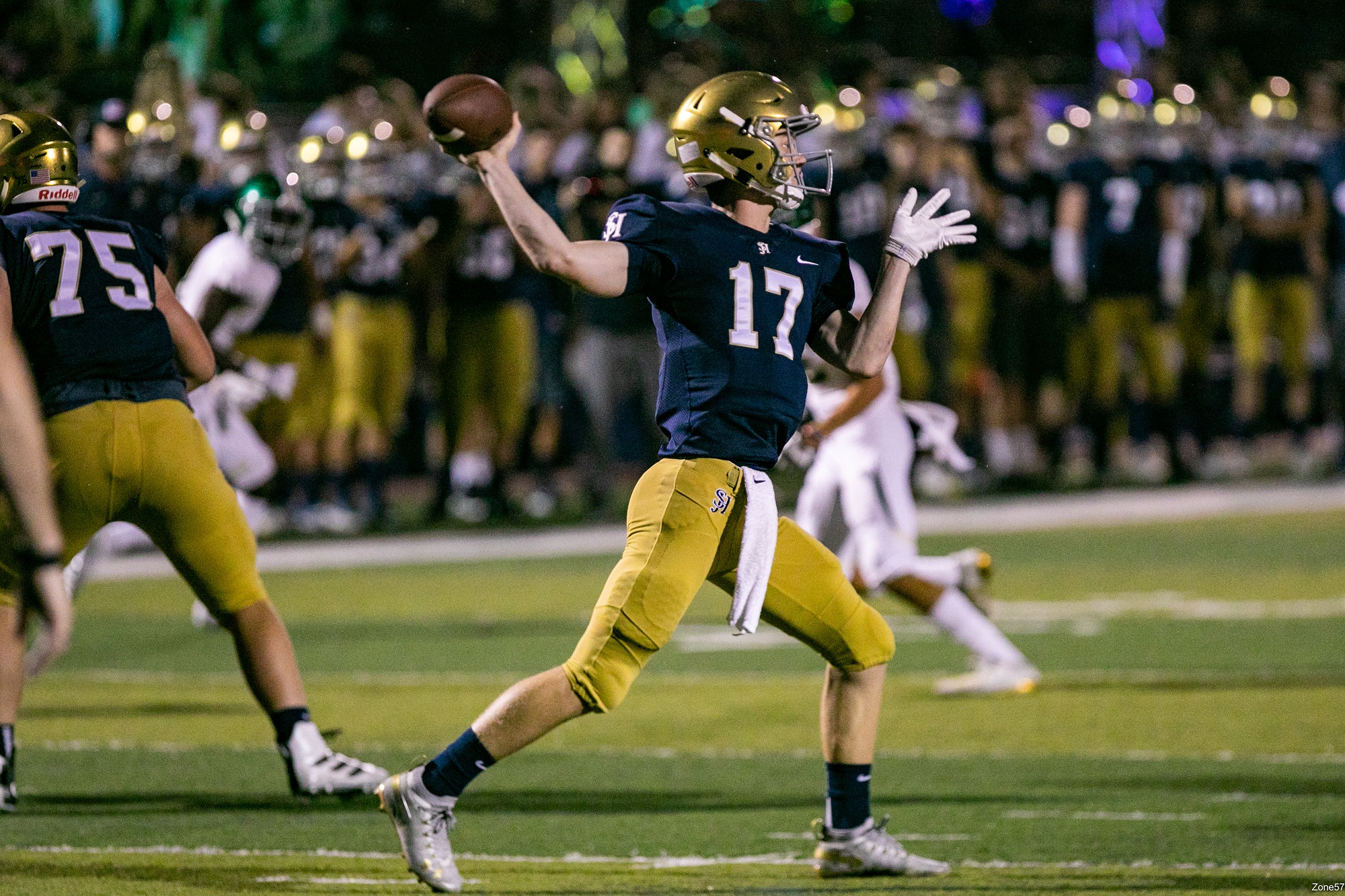 Last season, the San Juan Hills Stallions put together the program’s finest season yet with a Sea View League title, their first trip past the CIF-SS quarterfinals, as well as their first CIF-SS championship and first CIF Regional Playoff berth.

It’s a season that will be impossible to repeat, as there will be no CIF-SS playoffs during this pandemic-shortened season. That championship run was also back in 2019, so the Stallions have already put some distance between then and now.

“It’s so long ago,” San Juan Hills coach Rob Frith said. “It’s not that we’ve forgotten, but we’ve moved on. Now it’s a new focus. We didn’t think we’d have football, and now we do.”

That team was built on senior leadership, so San Juan Hills has lost some stars. However, this year’s team retains a leader where it means most—at the quarterback position.

Senior Hudson Jones returns as a three-year starter who has put up some impressive numbers (2,599 yards passing, 33 TDs last season) but is still looking to prove himself and get some college looks. Stepping up into offensive roles will be junior running back John Gaines and junior wide receiver Cole Monach.

The Stallions defense was just as impactful in the title run. Seniors Billy Hester and Elliot De Groote and junior Chase Schmidt will lead the dynamic group of hard-hitters.

San Juan Hills also jumps up to the South Coast League, which Frith said is arguably the toughest public school league in Southern California, with San Clemente, Mission Viejo and Tesoro on the schedule.

Transfers are a way of life in the Trinity League. It’s the cost of doing business in the top levels of modern high school football.

However, JSerra got hit particularly hard last year, as 16 standout players transferred from the program, including eight first- or second-team all-league players.

Still standing for the Lions are hard-working players who have made a commitment to the program, and some young guns ready to make an impact on the big stage.

The top two returners for JSerra are offensive tackle Mason Murphy and linebacker Jaden Genova, both seniors and physical forces on both sides of the ball.

Murphy signed with USC, and at 6-foot-6 and 290 pounds, he’s a lot to handle. He’s an athletic player who will hold down the offensive front and be a leader as the Lions gel together a young group.

Genova, who signed with Army, is a linebacker who has been making heavy impacts for the Lions since he was a freshman. Genova made 84 tackles and forced three fumbles last season. He will be the lynchpin of the JSerra defense.

With the transfers out, there is plenty of real estate for players who waited for their chance to take it. Sophomore quarterback Jaxon Potter, senior wide receiver Max Carvalho, junior lineman Rashad Beckham and senior linebacker Carson LeSage are all players who can step up.

Every football team in California is just happy that it gets to take the field at all this year, but some are luckier to be doing it than others.

Despite the return of outdoor sports and a smaller window for a football schedule, St. Margaret’s was almost unable to field its team. Though it is a high-level and successful football program, St. Margaret’s is a smaller school in a league with other small schools that faced various issues that bigger public and private schools didn’t have to confront.

Some league schools, including Fairmont San Juan Capistrano (formerly Saddleback Valley Christian), dropped down to eight-man football. Others, such as Capistrano Valley Christian, elected not to field a team due to the number of multi-sport athletes on the roster and the crossover of seasons that this strange schedule presents.

Even so, the Tartans were able to patch together a three-game nonleague schedule against Estancia, Rancho Christian of Temecula and Westminster to salvage a 2020-21 football season. What St. Margaret’s will be when the Tartans take the field is another matter.

The Tartans lost all of their top statistical players from last season, either by graduation or transfer. However, the St. Margaret’s program has operated like a well-oiled machine for so long, and there are building blocks to take the Tartans forward.

Senior Nick Ostlund, a University of Pennsylvania commit, is a standout at defensive end who racked up 31 tackles and 3.5 sacks last season.