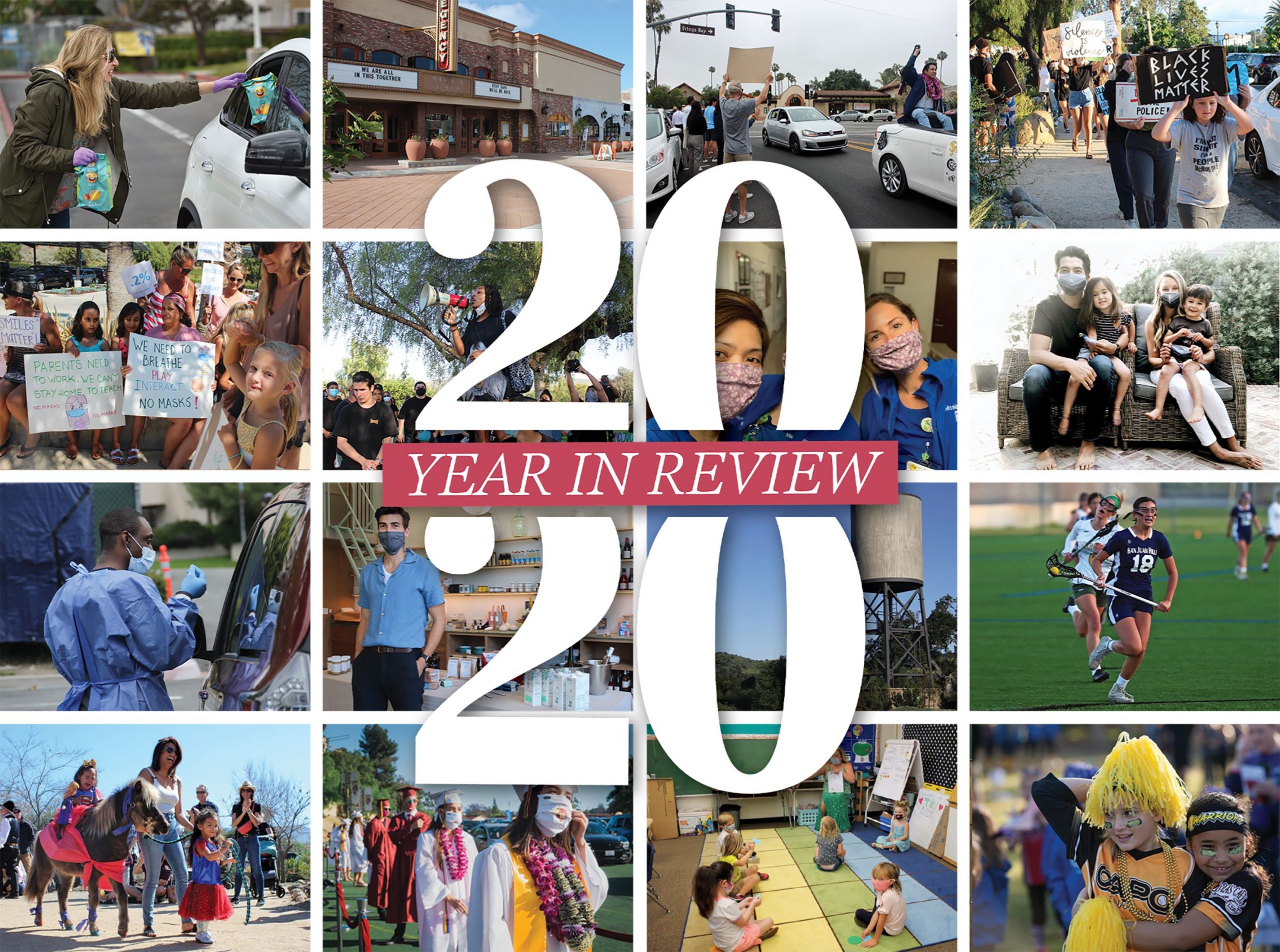 2020 Year in Review: An Unforgettable Time, in San Juan Capistrano and Beyond

Back in January, then-Mayor Troy Bourne predicted 2020 would be a big year.

It ended up being so—just not always for the expected reasons.

During the year 2020, everyone had to deal with the COVID-19 pandemic—with ICU beds filling up, businesses having to close and reduce operations, and the Swallows Day Parade not happening. People were urged to stay indoors by officials, though they didn’t always abide. School campuses closed and reopened, and downtown San Juan Capistrano was at times a hub of activity and at other times virtually empty as residents reacted to ever-changing safety guidelines.

This also was the year of “Black Lives Matter” protests against police brutality and institutional racism throughout the world after the death of George Floyd while in police custody in Minneapolis, with San Juan among the many protest sites. Demonstrators peacefully marched around the town center to call attention to cultural inequality, with no arrests or violence.

On the hyperlocal level, this year was a big one for San Juan Capistrano in which city projects—including the Ortega Highway/Del Obispo Street gateway renovations and Putuidem Village—moved forward and new businesses opened, including Inn at the Mission San Juan Capistrano and Heritage Barbecue. Verdugo Street got a fresh look, and Howard Hart became a new councilmember.

The San Juan Capistrano City Council approves an annexation agreement with Santa Margarita Water District (SMWD), meaning the city’s water and utility systems will be transferred to SMWD. The agreement still has to be formally approved by the Orange County Local Agency Formation Commission.

Orange County issues a local health emergency declaration on Feb. 26 due to concerns about the impending COVID-19 pandemic. There was one individual in Orange County with COVID-19 at the time of the declaration, but the person was reported to have recovered.

The annual Swallows Day Parade is indefinitely postponed due to growing concerns surrounding the pandemic. Local community groups gave away free food to people in San Juan Capistrano on the day the parade was supposed to happen. Restaurants clean and close, and the city braces for financial impacts.

The city council approves creating and funding a landscaping project for the Ortega Highway/Del Obispo Street—considered a key entry point into town. The renovations are to complement the new hotel, Inn at the Mission San Juan Capistrano, and the parcel receiving focus under the city project is the city-owned southwest corner.

73rd District Assemblymember Bill Brough is unseated in the March primary election. Republican Laurie Davies and Democrat Scott Rhinehart go on to campaign for the seat.

The Verdugo Street Beautification Project wraps up. New benches and lighting are installed, along with surface repaving. The new look for the downtown area goes over well with residents. The project began in October 2019.

Events go digital, including Coffee Chat, due to wariness over mass in-person gatherings.

The summer concert series at Historic Town Center Park is eliminated for the year due to the pandemic, and some city projects are temporarily delayed.

The new downtown Irish pub Paddy’s Station opens at the former Vintage Steakhouse spot, in defiance of closure orders. The move draws condemnation from some community members, who call the decision dangerous.

A coronavirus testing site is set up in San Juan, offering people an opportunity for a nasal swab test after making an appointment.

The family of Payton and Sarah Chester files a lawsuit against Island Express Helicopters over the fatal January crash. Vanessa Bryant, Kobe’s wife, files a separate lawsuit against the company.

Nonviolent “Black Lives Matter” protests are held in San Juan—and throughout Orange County, the U.S., and the world—following the deaths of George Floyd and other Black people at the hands of police officers. Protesters call for policing reforms, and denounce police brutality and racial inequity.

A drive-thru parade happens downtown to celebrate the San Juan Hills High Class of 2020. It is uncertain at the time if an in-person graduation could be held, and what it would look like if it were. Other schools such as Capistrano Valley Christian Schools hold non-traditional events for graduating students, including personal ceremonies at students’ homes. San Juan Hills went on to host a modified graduation ceremony during which students drove up individually to receive their diplomas.

Statues of Saint Junipero Serra—who plays a major role in San Juan history and culture—are toppled throughout the state after his interactions with Native Americans are scrutinized. Serra statues throughout San Juan—including at Mission San Juan Capistrano and JSerra Catholic High School—remain intact, and some in the area defend his legacy.

The city hosts a drive-thru Fourth of July celebration for residents to safely watch fireworks. Drive-in movies are held at Rancho Mission Viejo Riding Park, and throughout Southern California and across the country.

The city council approves resuming work on the Putuidem Village, skateboard park, and gateway landscaping projects, which had been previously halted over coronavirus-related economic concerns.

The Orange County Board of Education signs off on a measure recommending schools reopen without masks or social distancing, a move that draws widespread criticism. The board has no authority over individual school districts, and the measure was not binding.

CUSD drafts its own flexible campus reopening plan, requiring students to wear masks and socially distance while on campus.

Heritage Barbecue also opens at the former Mission Grill property in conjunction with Capistrano Brewing Co., after much anticipation. The new walk-up barbecue restaurant draws long lines that extend down the street and around the corner.

The San Juan City Council approves awarding a construction contract to C.S. Legacy Construction for Putuidem Village, which is expected to open early next year.

Inn at the Mission San Juan Capistrano, the new downtown boutique hotel, opens after years of planning. It features valet parking, a restaurant and café, and luxury suites, among other amenities.

The city council approves preserving the Northwest Open Space and prohibiting glamping there, through a rezoning of the area. Previous suggestions of glamping at the preserve drew some criticism.

A waiver application for elementary schools in CUSD is denied because of a lack of support from teachers. CUSD Board President Jim Reardon is criticized for remarks he makes against teachers regarding the district’s reopening in a Voice of OC article. Reardon apologizes for the remarks during a Board of Trustees meeting.

CUSD students begin returning to campus as part of a phased reopening plan starting in September and continuing into October, though students can stick with online learning if families so wish.

CUSD trustees approve forming a committee to consider renaming Serra High School in San Juan due to the scrutiny of Saint Serra.

Alpay files a complaint with the U.S. Office of Special Counsel, alleging Hart had violated the Hatch Act by running in a partisan election for city council. Alpay alleges the election became partisan after he was endorsed by both the Libertarian Party of Orange County and California, saying Hart cannot run since he is federally employed with the Department of Homeland Security. Hart voluntarily ceases campaigning after the accusation.

The Libertarian Party of California declares their endorsement of Alpay null and void, and choose not to re-endorse him. Numerous residents criticize Alpay over the allegation against Hart, saying a technicality is being taken advantage of to disenfranchise voters. Hart subsequently returns to the campaign trail after Alpay further loses the endorsement of the Libertarian Party of Orange County (LPOC). Alpay maintains he still has the LPOC endorsement, a claim disputed by LPOC Chair David Naranjo.

The San Juan City Council approves a traffic study for a potential new In-N-Out Burger location at the current Marie Callender’s building on Del Obispo Street. Many residents are against the new restaurant due to an expected increase in traffic.

The Orange County Registrar of Voters sees a historic turnout for early voting in the November Presidential Election. The 2020 election draws many more voters than previous elections.

Some San Juan businesses and nonprofits receive assistance funds from the city through the San Juan Capistrano CARES Grant.

The new Target store on Del Obispo Street opens, replacing the former Ralphs store at the location. It is a small-format store with a Starbucks inside.

John Q. Humphreys, longtime owner of The Ramos House Café, sells the restaurant to married couple Michelle and Kris Winrich. Michelle worked there as a manager and server and is very familiar with the restaurant, while Kris and Humphreys have played music together.

Hart is sworn in to the city council, replacing Maryott, whose four-year term is up. District 1 Councilmember Sergio Farias is also sworn in again after running unopposed. Maryott said his time on the dais went as expected, and he will spend more time with his family. Maryott adds there is the “near certainty” he will run for Congress again.

John Taylor is named the new mayor and Derek Reeve the new mayor pro tem, as part of the council’s annual leadership reorganization.

The city council approves a sale agreement to Ganahl Lumber for the Lower Rosan property. A hardware store and lumber yard, drive-thru restaurants, and a long-term vehicle storage area for auto dealers are expected to be built at the site.

Patricia Todd, who formerly worked as a legislative aide for Sen. John Moorlach (R-Costa Mesa), files a criminal complaint against outgoing Assemblymember Bill Brough for allegedly raping her after a 2015 dinner in Sacramento. Brough has faced previous allegations of sexual misconduct.

Braunstein and Davis are sworn in to the school board, as are Castellanos and Area 1 Trustee Amy Hanacek, who was unopposed in the election.

CUSD passes a Cultural Proficiency Plan intended to address cultural inequity issues through a number of ways, including implicit bias training for district staff and aiming for a reduction in suspensions of marginalized students.

Editor’s note: A year in review on the COVID-19 pandemic is available here.