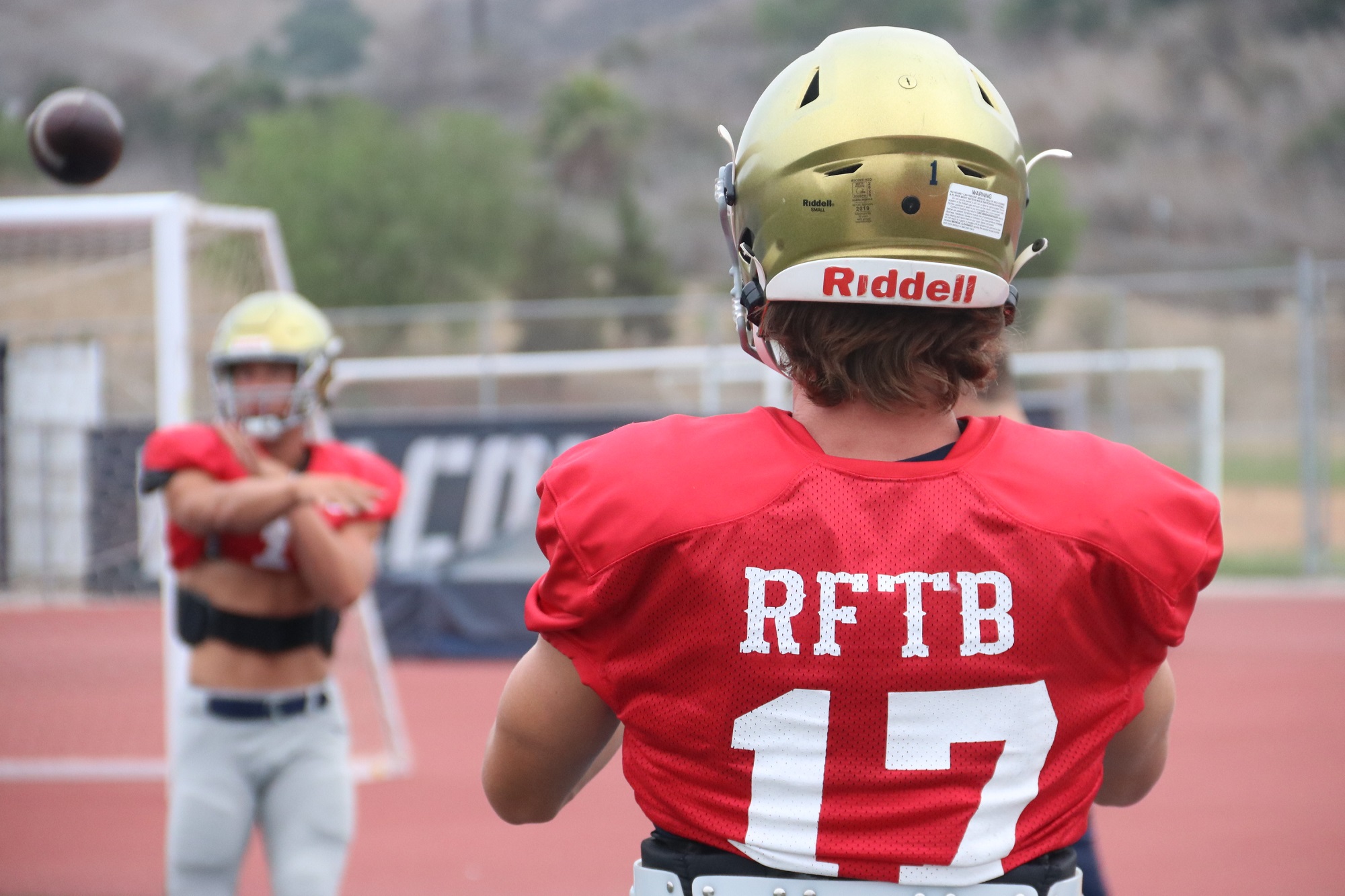 BRADEN PEGAN, San Juan Hills, WR, Sr.
Braden Pegan made a splash in the spring season when he committed to UCLA, his dream school. The 6-foot-4 receiver had offers from 10 schools, but he called the UCLA decision a “no-brainer.” Pegan was a proven deep threat last season and has worked on his footwork to improve on short routes.

DYLAN MILLS, JSerra, QB, Soph.
Dylan Mills faced down the gauntlet of the Trinity League as a freshman and came out better for it. Mills says the game has slowed down for him approaching his second season. He has the ability to extend plays with his feet and also throws a good deep ball.

JACK RUFF, St. Margaret’s, QB, Sr.
Jack Ruff has that prototypical quarterback frame at 6-foot-4 and uses it to his advantage. He has grown as a leader for the Tartans over the past year and has full command of the offense. Ruff is drawing interest from Ivy League universities and has an offer from Georgetown.

JACK LEETZOW, CVC, OL, Jr.
Jack Leetzow will anchor an offensive line for Capistrano Valley Christian that is still learning. He possesses skill on both sides of the ball and will also anchor the Eagles’ defensive line. Leetzow is one of a handful of Eagles players to develop their leadership skills over the past year.

CHASE SCHMIDT, San Juan Hills, DB, Sr.
Chase Schmidt was second in tackles for San Juan Hills last season and was named first-team All-South Coast League. He has been on the scene since his championship-sealing interception in the 2019 CIF-SS title game. Schmidt is quick, feisty and loves to hit, despite his smaller frame.

JOEY TORREZ, JSerra, MLB, Jr.
Joey Torrez is a lynchpin for the Lions defense in the front seven. Torrez is a tough, strong and sturdy football player who plays with a lot of passion. At 6-foot, 230 pounds, the junior can come downhill like a freight train to plug up opposing run games.

TREY KINGSLEY, St. Margaret’s, DL, Sr.
Trey Kingsley will be a force to be reckoned with on the offensive and defensive line for the Tartans. He is 6-foot-2 and can move well in the trenches. Kingsley will be integral for a St. Margaret’s defense that plans on being aggressive and bringing pressure throughout the game.

KADEN MANRIQUE, CVC, S, Sr.
Kaden Manrique was one of only seven returners after the 2019 season, but the senior has stuck through to become a leader who showcases a strong work ethic. Manrique is a top athlete for the Eagles and will start on both sides of the ball at safety and running back.