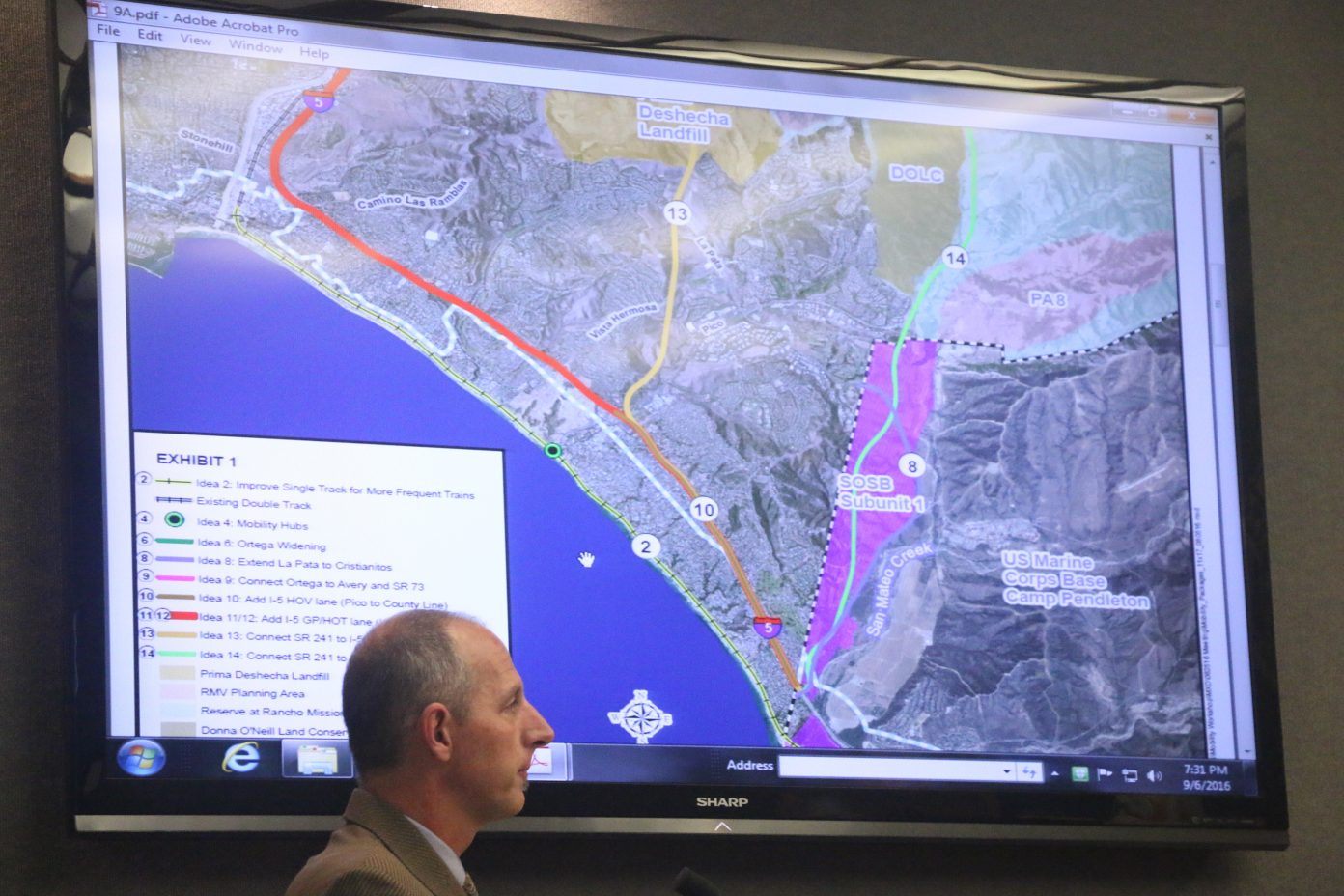 After the Transportation Corridor Agencies (TCA), the board overseeing The Toll Roads in Orange County, was unable to extend the 241 down through Trestles and San Clemente a few years ago, a new development proposal is in the works. (Click here to view the proposals.)

During the Tuesday night San Clemente City Council meeting, officials discussed proposals on which the TCA is working. Two major proposals concerned Council members. One would extend the project through Avenida La Pata and connect to Avenida Pico. Another would construct a toll road around the eastern portions of San Clemente and into Cristianitos. The primary goal is to get the 241, which ends at Ortega Highway in San Juan Capistrano, connected to the I-5 freeway.

Another alternative would extend the southernmost part of La Pata to Cristianitos.

Most of the concerns the Council had regarded the increase in traffic and construction through the rest of the city.

Councilwoman Kathy Ward brought this discussion to light, as she is the city’s liaison to the TCA.

“La Pata is open. We’re hearing great comments from all our residents; even people who do not live in Talega are saying they’ve noticed a change,” Ward said. “Some are saying it’s cut down 30 minutes on their commute.”

Ward asked Tom Bonigut, deputy director of public eorks, if La Pata would continue to be a road without tolls despite the extension, but he said he wasn’t sure.

The proposal has not yet been through an environmental review.

“I feel like I’m on acid watching this. I mean look at it. This is crazy,” Councilman Tim Brown said. “Nobody in their right mind would want this to happen.”

Past city councils have opposed proposals for the connection.

Additionally, the proposal to seek funding for a “double track,” another train track, through the San Clemente area to San Juan was proposed, but the Council wasn’t keen on that idea either.

The Council voted unanimously to pass a resolution to oppose the ideas to connect La Pata and Cristianitos to the 241, but did seek to explore some of the other alternatives. There were more than a dozen different ideas. The main reason the extension is highly sought by stakeholders in the area is to alleviate as much traffic as possible from the I-5 freeway.

Councilwoman Lori Donchak said she wanted to have a traffic study on how La Pata has alleviated traffic in the area.

“My hypothesis is the traffic need for the 241 extension has shrunk because La Pata is in place now,” Donchak said.

Mayor Bob Baker said there are traffic studies from 10 years ago that prove the 241 extension is a “road to nowhere.”

According to the TCA website, collecting tolls was the main revenue source until state funding was depleted and revenue bonds were sold to make up the difference.

A forum will be hosted by the TCA and local officials at 5 p.m. on Oct. 5 at St. Andrew’s by-the-Sea, 2001 Calle Frontera in San Clemente.