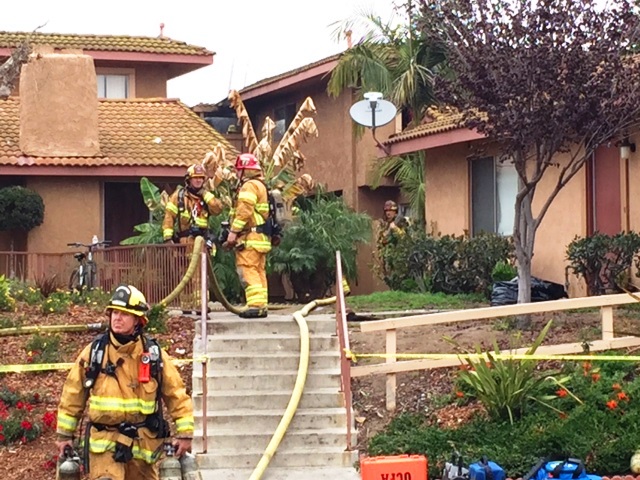 The OCFA received a call at 9:15 a.m. reporting a structure fire in a condominium complex on the 26500 block of La Zanja in San Juan Capistrano.

A woman in her mid-20s tossed a 3-year-old girl and a 2-year-old girl out of a rear bedroom window and lowered a 5-year old boy to neighbors waiting below to catch the children, before jumping out onto a crib-sized mattress placed on the asphalt by neighbors to break her fall, Concialdi said.

A 48-year-old woman, the last of five who exited through the window, jumped, suffering serious lower leg injuries upon landing, as well as severe burns and smoke inhalation. She was taken to Mission Hospital in Mission Viejo in serious condition.

Firefighters rescued Liborio’s mother, Liborio and his 2-year-old brother from inside the condo. All were in grave condition at the

time of their transport to Mission Hospital in Mission Viejo.

Liborio’s mother and the 48-year-old woman were moved to the UCI Medical Center burn unit in Orange for treatment Tuesday afternoon, Concialdi said.

A small dog found hiding in the bottom drawer of the dresser under some clothing was also rescued by firefighters and given oxygen for smoke inhalation. Concialdi said the dog, Osito, recovered quickly.

Sixty-five firefighters responded to the 2-alarm blaze, extinguishing it in under an hour.

The fire resulted in an estimated $180,000 in damages to the structure and $40,000 to the contents of the two condo units involved. A total of 80 people, residing in eight units at the complex, were displaced.

Investigators believe one of the children started the fire while playing with a lighter in the living room, Concialdi said.

A total of 17 people were living in the 4-bedroom condo. Three children were at school and five adults were at work when fire broke out.

“With so many residents living in a 4-bedroom condo, the abundance of beds, bedding, clothing, etc. greatly increased the amount of fuel for the fire,” Concialdi said, adding that investigators found no working smoke alarms in the unit, only the empty bases the alarms would have twisted on to.

“Smoke alarms are required in every bedroom and in all hallways leading to a bedroom and when they work provide crucial extra seconds that save lives by not only alerting people in the affected rooms but also in adjoining rooms and adjacent units,” Concialdi said. “In October, OCFA received 5,000 smoke alarms from Kidde to be given to families in need in Orange County. Those in need of working smoke alarms should call the OCFA smoke alarm program number at 714.573.6190 to request them.” —Allison Jarrell contributed to this report.