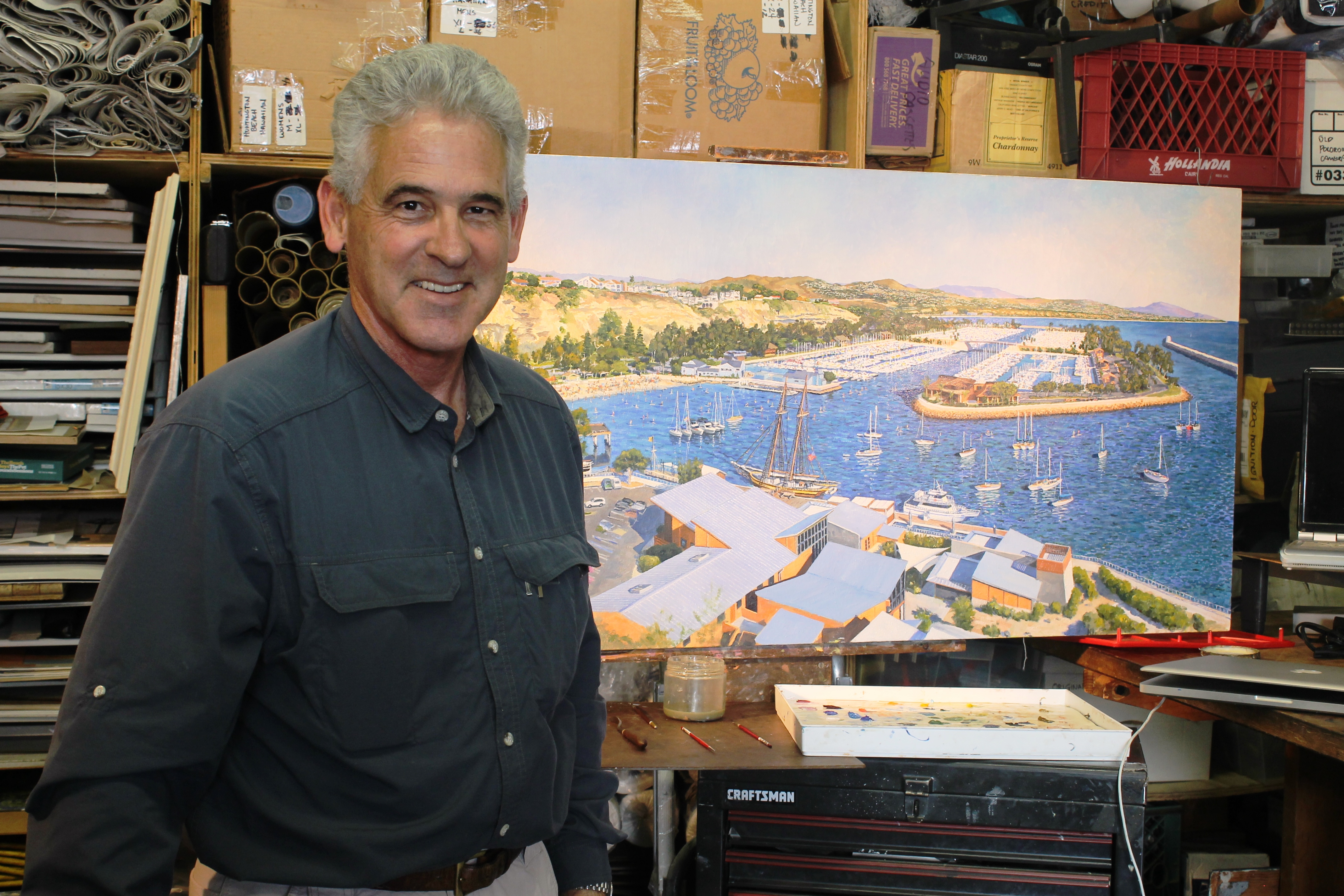 A New Commission for an Old Painting

Nearly 25 years after completing his first painting of the OC Dana Point Harbor, artist Paul Gavin is putting the finishing touches on his third go at capturing the essence of Orange County’s southernmost port.

In 1988, Gavin completed his first portrait of the Harbor, a watercolor and pen painting titled “Dana Dreams: An Endless Summer.” The piece was part of a series highlighting coastal treasures like the San Clemente Pier, San Onofre State Beach and Catalina Island’s Avalon Bay. Another painting of the Harbor was commissioned in 1989, but never quite reached Gavin’s standard of completion.

Now, with an order from a local resident who found the unfinished painting in the basement of a recently purchased building, Gavin has been given the opportunity to visit the Headlands bird’s eye view of the Harbor once again, highlighting changes and new additions to the seaport like the Maddie James Seaside Learning Center and stand-up paddleboarders.

“The painting is done from the same view, which to me is the ultimate view,” Gavin said. “When you are looking toward land, you see Dana Point, San Clemente and Camp Pendleton, it is just really dynamic.”

Gavin and wife Kimberleigh, also an artist, live in San Juan Capistrano with their brood of dogs, cats and snakes. The pair met in the early ’80s at UC Irvine and has since made south Orange County their home and canvas, with art displayed at post offices in Dana Point and San Clemente, and a studio tucked away in San Clemente’s industrial district.

Every year since 1993, Kimberleigh has designed T-shirts, sweaters and posters to celebrate St. Joseph’s Day and the return of the swallows at the Mission. Eleven years ago, she also designed the original masthead for The Capistrano Dispatch, which depicted the Mission and swallows flying overhead.

Paul Gavin has also contributed to San Juan Capistrano’s local traditions, including an oil painting called “Fiesta de Oro,” to celebrate the 50th anniversary of the Fiesta de las Golondrinas season and Swallows Day Parade in 2008. The painting, which shows a man and woman riding on horseback through San Juan Creek with the Mission in the background, was used on T-shirts that year.

Currently, Gavin is working feverishly to finish the Harbor painting, which coincidentally will fall close to the 25th anniversary of his first rendition and just in time for Dana Point’s 25th birthday.

Prints of the Harbor painting will be made available soon after the original’s completion. To see more of the Gavins’ work, visit their website, www.gavinarts.com.