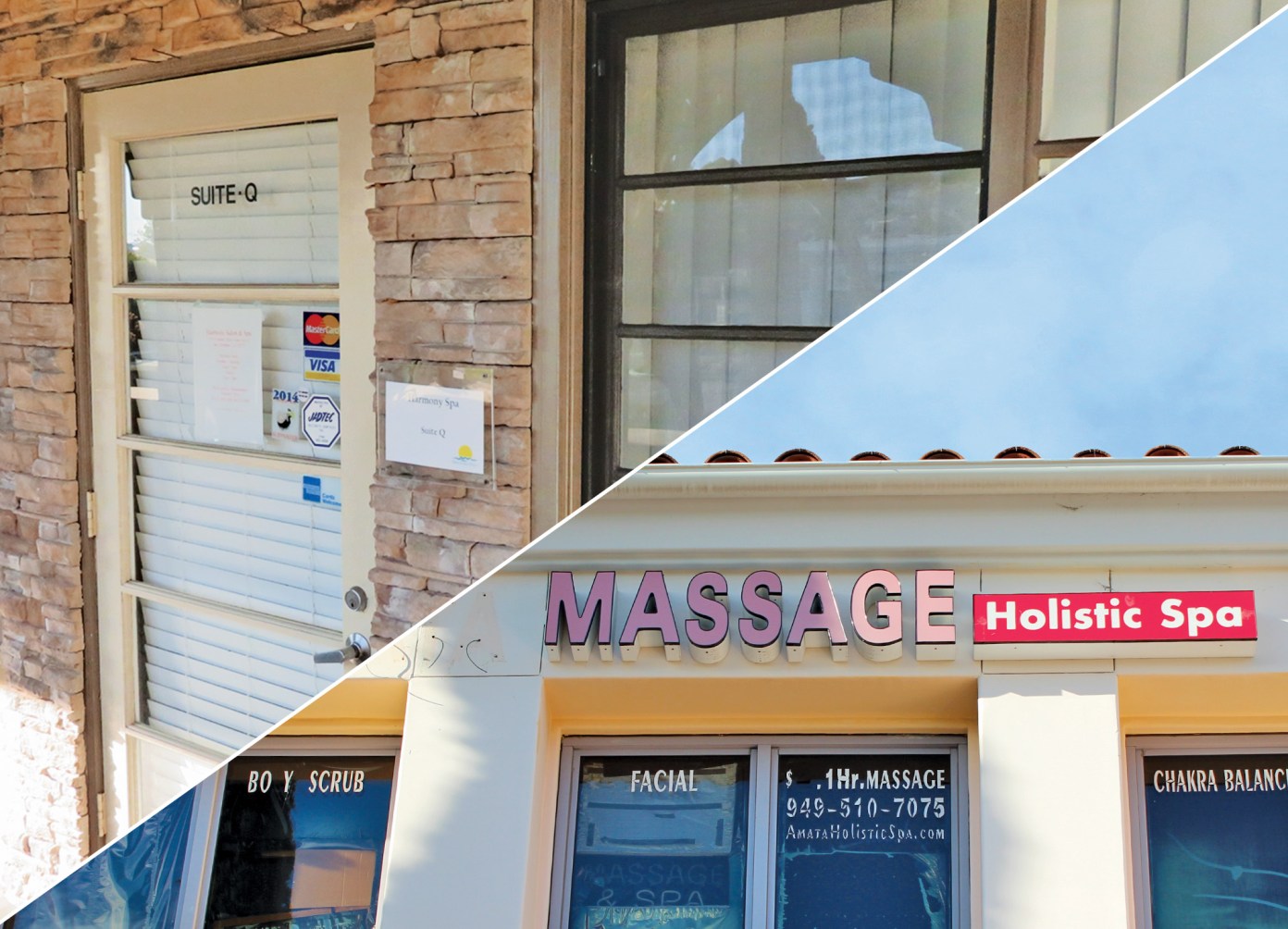 San Juan Capistrano Councilmember Howard Hart first became aware of the pervasive issue of human trafficking when he was an officer in the Navy.

To ensure that military personnel at home and abroad were not contributing to the problem, the Department of Defense began an education campaign several years ago—and as Hart learned more about it, he was taken aback by the “vast scope of the problem.”

“When I began considering a run for city council a couple of years ago, human trafficking was near the top of the list of things I hoped to address,” Hart said. “The problem was that I was stymied regarding ways that local governments could play a role in addressing the problem.”

In one of his first acts after getting elected to the council in the November 2020 election, Hart introduced revised regulations for massage parlors in San Juan Capistrano that strengthen the town’s ability to shut down parlors if they are reported to host unlawful activity—particularly illicit sexual activity.

Since the effective date of the amended ordinance on July 15, the licenses of two massage establishments (SJC Massage on Rancho Viejo Road and Diamond Holistic Massage on Ortega Highway) have been revoked.

“At each of the two sites, an establishment employee attempted to engage in sexual conduct with an undercover officer, which is prohibited under the city’s massage ordinance,” said Ken Al-Imam, San Juan’s chief financial officer, who worked closely with city officials and the i-5 Freedom Network in establishing the updated regulations.

I-5 Freedom is a San Clemente-based nonprofit advocacy organization that aims to raise awareness about and stop human trafficking.

A hearing for a third site (Le Spa on Camino Capistrano), where allegations of similar activity with an undercover officer were reported, was initially scheduled for Nov. 10 but was continued to Dec. 2 to accommodate the schedule of the business’s legal counsel.

While San Juan has had some success in tamping down on illicit activity, progress appears to be slower in San Clemente, where its councilmembers passed a similar ordinance to strengthen local laws in August 2020.

Based on an Oct. 25 public-records request for information on sites in San Clemente that have closed as a result of the ordinance, only one massage business, Harmony Spa on Camino Mira Costa, had its license revoked last year.

That revocation, however, occurred in February 2020, months before the council passed the ordinance.

According to the city’s records it provided to San Clemente Times, Harmony Spa had continued to operate into early March, prompting site inspections from code compliance officers. The business also had been cited for reportedly violating license and tax payment requirements.

Except for providing the documents on Nov. 18, San Clemente’s city management did not respond to multiple interview requests for this story.

Asked whether there were key differences between San Clemente’s and San Juan’s ordinances that have led to different outcomes, i-5 Freedom Network Founder and Director Brenda Wells said that while San Juan’s is a bit more robust, the differences are not necessarily the issue.

“It’s not the differences in the ordinance, although they do have a more robust ordinance. It’s who’s willing to act on it, that’s the primary difference,” said Wells, who had, through her nonprofit, implored the City of San Clemente to strengthen its ordinance on massage parlors since 2017.

Acknowledging that while San Clemente Mayor Pro Tem Gene James and fellow Councilmember Chris Duncan had previously supported efforts to tackle human trafficking, San Clemente hasn’t had a notable champion on the issue, like San Juan has had with Hart.

“You need to have people willing to be proactive like city leaders,” Wells said.

Both San Clemente’s and San Juan’s ordinances are largely the same, as they require businesses to have only one customer entrance in a visible and well-lit location, prohibit locks for massage rooms, and give police services the authority on reviewing applications and license renewals.

One of the key provisions of the two ordinances was the involvement of the owners of commercial properties who lease space to massage parlors, making them more responsible for their tenants.

If a massage parlor is found to be in violation of the city’s code, prompting a revocation of the business license, a landlord is prohibited from renting the same space to another massage business—for two years in San Clemente, and for five years in San Juan.

“Under the new ordinance, if a massage license is revoked, the property owner is prohibited from allowing another massage establishment to open anywhere on that property for five years from the date of massage license revocation,” Al-Imam explained.

That aspect sets a “strong incentive” for landlords to be “keenly aware” of the conduct of their prospective massage tenants, Hart said.

Hart said he got in touch with Wells through his late brother, Bill Hart, who had made his own run for the San Clemente council but was not elected.

“Brenda told me about the work her group was doing educating local hotel staff on the problem, and then mentioned how she had been working with the San Clemente Planning Commission on refining their massage parlor ordinances to make it harder for the traffickers to operate there,” Hart said. “Brenda educated me on how nearly all illicit massage parlors engage in human trafficking, and that most of those in California are run by Asian organized crime syndicates.”

Hart gradually educated people about the victimization of parlor workers while campaigning for the San Juan council, and in time introduced plans for the new ordinance.

“Once elected, I informed (San Juan) City Manager Ben Siegel that my first council action item would be to tackle this issue. Ben was onboard immediately, and the city staff became a true partner in this endeavor,” Hart said.

“In the meantime,” Hart continued, “I was introduced to Emily, a brave American survivor of human trafficking, who was victimized over a several-month period while she was a student at an Orange County university. When I introduced a council action item earlier this year, Brenda and Emily both provided important context to my colleagues.”

The city’s code enforcement staff has worked closely with the Orange County Sheriff’s Department in carrying out the new ordinance.

Wells this week praised that cooperation between the City of San Juan Capistrano and OCSD, stating that “the effectiveness of the ordinance comes down to a coordinated response to all of those entities.”

“They consider that as evidence, so that’s enough to initiate an investigation,” Wells said. “What they don’t do is pursue if the city won’t stand behind their efforts.”

Leadingup to the San Clemente City Council’s passage of the ordinance last year, a San Clemente Times cover story found that nine establishments were reviewed, but only two at the time appeared to be actively engaged in illicit activity.

A review of the site this week could offer an explanation on the apparent lack of progress in San Clemente. According to the site, only one establishment now has had a user recently leave a review, about a month ago. Reviews for all other businesses listed are at least two years old.

Sgt. Todd Hylton, OCSD spokesperson, said in an email that the differences in the ordinances “does not affect the working relationship between OCSD and the Cities of San Clemente or San Juan Capistrano. OCSD works collaboratively with both cities to address crime trends.”

Hart said while he is under “no illusion that what we do in San Juan Capistrano will make a significant dent” in the massive issue that is human trafficking, he knows he is making a difference on some level.

“I hope that other Orange County cities see what we are doing here in San Juan Capistrano, find inspiration in it, and follow suit,” Hart said. “It is the right thing to do. And, if enough cities follow suit, together we can make a real difference.”

Hart said that those who engage in human trafficking are not welcome in San Juan, and city officials will continue to do everything in their power to deny them the opportunity to operate in town.

For a list of resources and to learn more about human trafficking, visit i5freedomnetwork.org.

Shawn Raymundo
Shawn Raymundo is the managing editor for Picket Fence Media. He graduated from Arizona State University with a bachelor’s degree in Global Studies. Before joining Picket Fence Media, he worked as the government accountability reporter for the Pacific Daily News in the U.S. territory of Guam. Follow him on Twitter @ShawnzyTsunami and follow San Clemente Times @SCTimesNews.