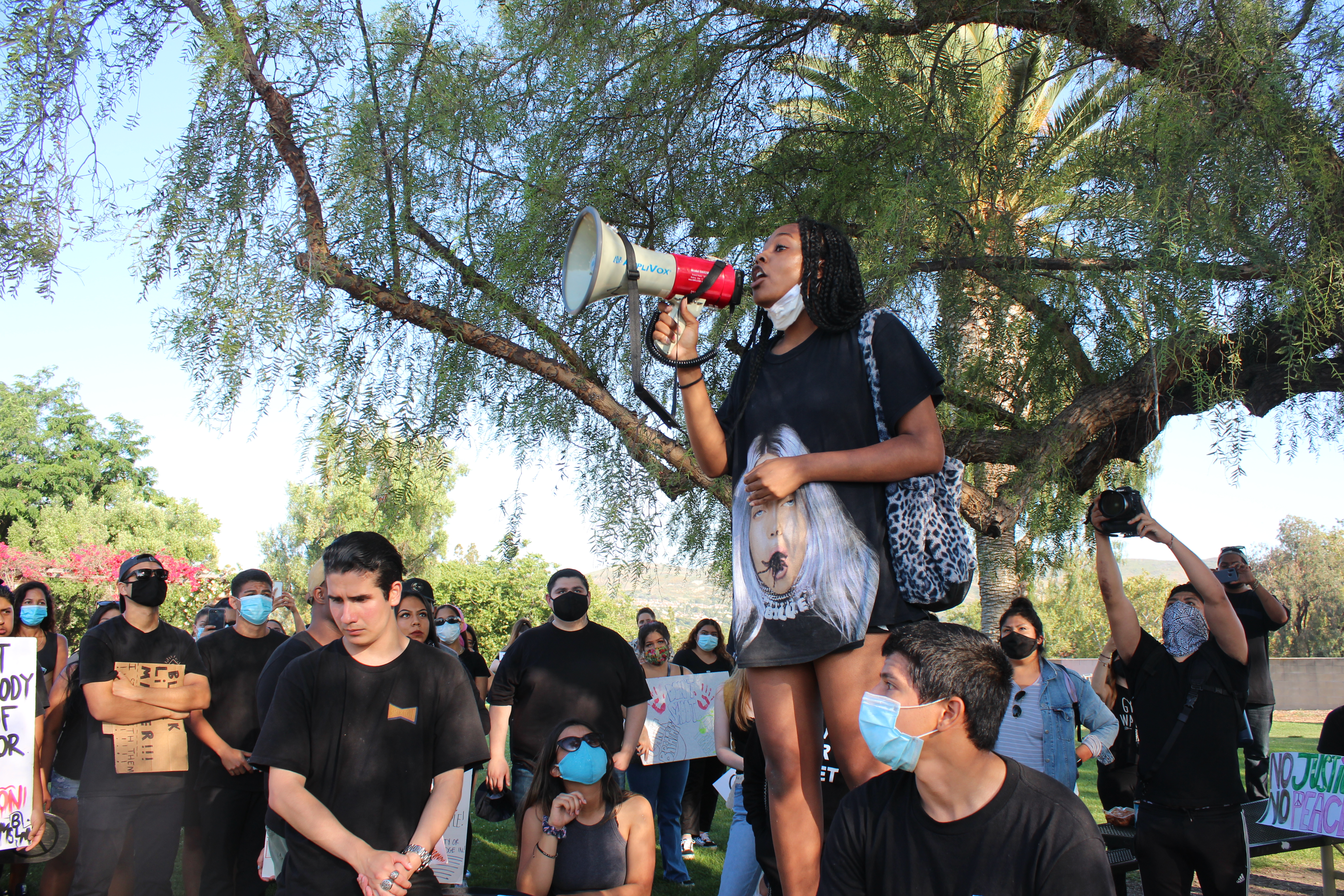 A “Black Lives Matter” protest in San Juan Capistrano denouncing institutional racism and police brutality ended on with hugs, calls for action and hundreds taking a knee in silence.

The demonstration on Wednesday, June 3, was peaceful and had no violence. Orange County Sheriff’s Department (OCSD) officers were at the protest to monitor the situation, observing the event from the sidelines. Officers spoke with protesters before the event began to find out their plans and ask for a peaceful demonstration. Officers did not take a knee with protesters when asked to do so, which disappointed the crowd.

Young people made up a portion of the multicultural crowd. Some of the young activists—such as Kevin Collins of Laguna Niguel and Ranielle Hoffman of Mission Viejo—told their peers to vote in the November elections, call out racist comments from parents and encouraged Generation Z to stay involved. The protest was organized after a video circulated of George Floyd’s death in Minneapolis. Former officer Derek Chauvin forcibly placed a knee on Floyd’s neck while Floyd was on the ground. Chauvin is charged with second-degree murder, and charges have been brought against three other officers on the scene.

“I want to start off by saying thank you to all the allies because clearly you have checked in on your black friends. You clearly see what’s going on. You clearly see the fear,” activist Dwight Williams Jr. said during a speech to fellow protesters as the San Juan demonstration wrapped up. “If you can see me right now, you can see I’m literally twitching and that’s only because the cops are right there. Yes, there may be good cops but I see so many things in the media that only highlight the bad cops, that only highlight what’s happening.”

Williams encouraged the crowd to ask their friends what their grandparents and parents have been through, and said now is not a time to be silent.

The crowd gathered at Historic Town Center Park, walked throughout town—including down Del Obispo Street and in front of Mission San Juan Capistrano—and held signs while chanting “Racist cops have got to go!” and “Black lives matter!” They also played music, including Childish Gambino’s protest anthem “This Is America,” Tupac Shakur songs and “O-o-h Child” by The Five Stairsteps. Cars driving by honked in support. OCSD estimates 600 people attended. There were no arrests, injuries or damage to property.

“It is a united front. This is for everybody,” said Vanesa, a protester who gave only her first name. “We’re here to show we’re no longer tolerating any police brutality. Change needs to happen, and we’re going to make sure it happens. I love the protests. I think they’re great. The rioting and the looting of buildings is not really great but, of course, buildings can be replaced. Lives can’t. We’re going to make sure we don’t lose any more lives.”

Holding law enforcement accountable was a solution mentioned by Vanesa. Vanesa’s boyfriend is in the military, an institution she said holds its members accountable.

San Juan Capistrano residents Joel and Randi Peshkin, a married couple, came down to show solidarity with the community. Joel said, by and large, the police in the local area are good and have a relationship with the community, but that isn’t so elsewhere.

“I think it’s important that nationwide and worldwide, we’re sending a message that relations between police and minority communities are critical and need serious work, even though it’s not such a pressing problem right here at where we live,” Joel said. “I’m very happy to see our sheriff’s deputies are out here. They’re ready for things, but they’re not dressed like soldiers. They’re dressed like the deputies we all know from foot patrols and community events. That’s the right way to do it.”

One protester who gave only a first name, Ed, said police departments should be defunded if they’re not helping people, since the purpose of police is to protect human rights.

“Our rights are being taken away,” Ed said.

Celina Corley, a crime prevention specialist who works for OCSD and the City of San Juan Capistrano, welcomed protesters to the town before the event began.

“We support your First Amendment right to exercise your voice. We ask that you partner with us in the sense of keeping the peace,” Corley said. “We ask that you secure your safety as you exercise your voice, and that if you do want to take some sort of route to parade, that you inform us so that we can make sure that you don’t impede traffic and that you stay in the sidewalks. We have the utmost concern for your safety and the safety of the residents.”

Protester Angeles Loya also called for peace after Corley’s remarks, saying the event will exhibit love and fight for justice. Loya said anyone with hate in their heart should go home.

“Anybody who has lost their lives, including our black brothers and sisters, that’s all we’re fighting for,” Loya said. “Love, peace, and we’re gone.”

Some local businesses closed before the protest began, as a precaution.

Regional political leaders have weighed in on the protests, including Rep. Mike Levin, whose district includes San Juan Capistrano. Levin, a Democrat, released a statement saying he does not support the “small minority of individuals who have taken advantage of the situation to commit violent and criminal acts, and we cannot allow them to define these overwhelmingly peaceful protests.” Levin added that he will focus on listening, showing compassion, and trying to understand what it means to be black or brown in America—something he will never know.

“We need new laws to strengthen transparency and accountability in law enforcement. We need to ban unnecessary and excessive uses of force, including chokeholds, and we need to end the militarization of local police departments,” Levin said. “As we work toward real reforms, we also need to acknowledge that the vast majority of police officers are honorable people—fathers and mothers, sons and daughters, our neighbors—who risk their lives to keep our communities safe. As we saw with San Diego Police Chief David Nisleit’s decision to ban the use of a chokehold by his officers, they can and must be a part of the solution.”

Brian Maryott, who is running against Levin for the 49th Congressional seat in the November election, also released a statement. Maryott, a Republican, said the Floyd video showed a “wanton disregard for human life” and was “deeply disturbing,” and most protests have been peaceful. Maryott praised sheriffs in Orange County and San Diego County for their handling of and response to recent protests.

“Sadly, many cities around the country have also seen riots and other criminal conduct, particularly during the evening hours. There is no excuse for this kind of activity,” said Maryott, who also sits on the San Juan Capistrano City Council. “If it doesn’t stop, it seems inevitable that there will be further loss of innocent life. Should that happen, it will pile more sadness and heartbreak on what is already a mountain. We remain hopeful for calm and healing in our communities. We seek justice for George Floyd.”

State Sen. Pat Bates (R-Laguna Niguel), whose district includes San Juan, said in a statement the “deeply troubling” death of Floyd in Minneapolis has “rightly sparked outrage and demands for justice across the nation,” and that most protesters over the past week have been non-violent.

“However, some have used the protests as a pretext to commit criminal acts. The looting, vandalism, and violence that have ravaged many communities are inexcusable. The most basic job of government is to provide law and order to keep all residents safe. This means ending the lawlessness by all necessary lawful actions,” Bates said. “However, ‘law and order’ are more than just ending the violence. ‘Law and order’ also means ensuring justice for Mr. Floyd’s family and holding accountable those who have violated their oaths to serve and protect their communities. It means holding the people accountable who have violently attacked innocent civilians and law enforcement officers across the nation.”

“I would like to thank chief of police services Lt. Bulanek for his leadership and oversight of a very large contingent of deputies from around the county,” Reeve said. “All of the deputies supporting the event acted with professionalism, allowing the protesters to peacefully exercise their First Amendment rights while abiding by state and local laws. OCSD ROCKS!”

Breakthrough San Juan Capistrano, which helps underrepresented students through academic programming and guidance, released a statement saying they stand in solidarity with the African-American and black communities, and “join the many voices around the nation calling for meaningful change in the face of the killing of George Floyd, Breonna Taylor, Ahmaud Arbery and countless other lives.”

“Breakthrough SJC believes in equity, justice, inclusion, community, and love. We believe that education is power and changes lives and that all students, regardless of their background, should have equitable access to pursue their education,” their statement said. “We exist because of the limited access and opportunity for some students, especially for students of color, and as a result their underrepresentation in higher education. We exist to disrupt and overcome those injustices and inequities, every single day.”