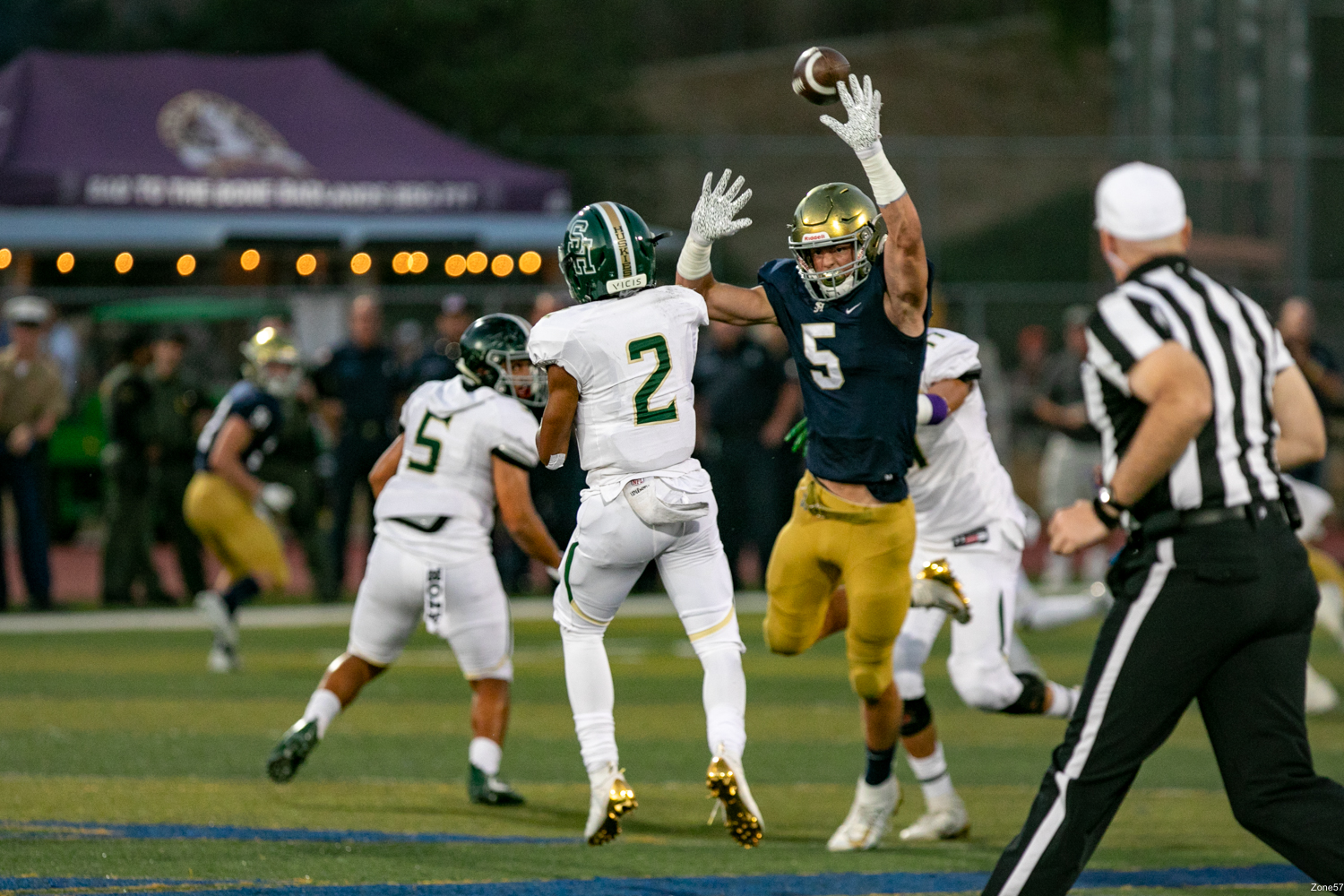 This is the second article in a series leading up to San Juan Hills’ CIF-SS Division 4 championship game at Loyola of Los Angeles on Saturday, Nov. 29 at 7 p.m. Here is the first story on the Stallions seniors leading their bid for their first CIF-SS championship. Check back tomorrow for a new entry and follow @SouthOCSports on Twitter for coverage leading up to, during and after Saturday’s game.

Any team that matches up with San Juan Hills knows its already in an uphill battle.

While the Stallions’ offense has developed into a threat of its own with the efficient operation of quarterback Hudson Jones, the pounding rush game of running back Austin Hogan and the ever-present game-breaking ability of Joey Hobert, defense has been the calling card for San Juan Hills over back-to-back Sea View League champion seasons.

The aggressive nature and adaptability of Stallions defensive coordinator Pete Silvey’s group has helped land San Juan Hills in its first CIF-SS championship game in the Division 4 title game at Loyola of Los Angeles on Saturday at 7 p.m.

“Under the leadership of Coach Silvey, he’s an amazing defensive coordinator,” Utah-committed defensive end Tyler Wegis said. “The plays and work he puts in to have a great game plan is tremendous. This defense just works together. We love what we do out there.”

The San Juan Hills defensive line provides pressure on nearly every single play, and the linebackers and secondary are able to adjust to each week’s new game plan without any major hiccups.

“We like to attack the offense,” Silvey said. “We want to try and make them make decisions, rather than sit back and wait for what they’re going to do. We’ve played games with extra linebackers, extra D-linemen, extra DBs. We can get in different fronts, and that’s a tribute to the kids that guys can come in and others can adapt.”

San Juan Hills held opponents in the regular season to an average of under 10 points per game, with only three game of over 20 points. Those numbers have taken a tick up in the postseason with 25, 21 and a season-high 28 points allowed, but the pressure is still there.

The Stallions have forced at least one turnover in each of their last 12 games and multiple turnovers in eight games, including their last two playoff games.

This is a tribute to that pressure from the defensive line. The Stallions are holding opponents to 86 yards rushing per game and can get at least one man in the backfield at all times.

Wegis leads the effort up front with team highs in sacks (10 ½ ), quarterback hurries (35) and tackles for loss (36). All of those numbers are well above his nearest teammate. Wegis is also fourth in tackles (83).

Wegis took over the role of disruptive defensive end from Cade Albright, who’s now at BYU. Albright also had a standout senior season last year with 19 sacks. Similarly to Albright, Wegis added to his lanky 6-foot-6 frame with a strong offseason in the weight room to improve his play and college recruitment stock.

“(Wegis) was Cade’s backup last year, but he was too good to not put on the field,” Silvey said. “He mostly played inside a little bit more, and I think that helped him. He had to survive. He wasn’t enormous, so he had to slash around.”

Wegis is the standout on the line, but he is bolstered at every level behind him.

Hobert is second in tackles (95) and leads the team in interceptions (4) and fumbles caused (5). Senior James Gaines and junior Henry Vangelos are co-leaders in pass defenses with nine. Vangelos has three interceptions, and Gaines has two interceptions.

In the CIF-SS Division 4 championship game, the defense will again be key.

Loyola averages 124 yards passing per game and a 162 yards rushing.

As San Juan Hills’ most consistent group, the Stallions defense will no doubt show up for the program’s biggest moment yet.