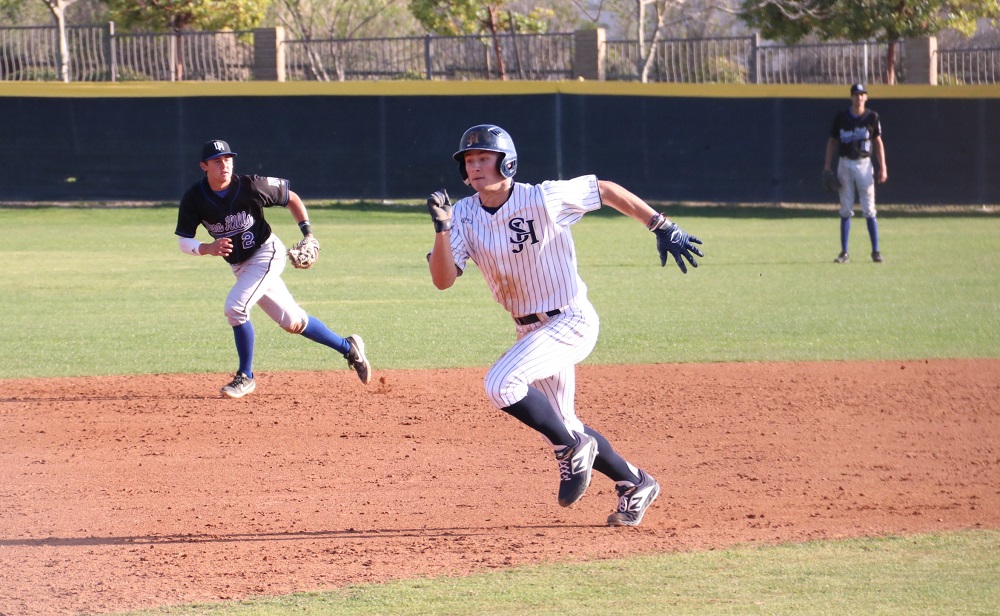 The San Juan Hills baseball team took a strong start to the season into Sea View League play, but the Stallions dropped their opener at reigning league champion Aliso Niguel, 2-1, on March 6.

San Juan Hills (7-3, 0-1) took a 1-0 lead in the second inning when Tommy Burleson drove in Ethan Pope, but it didn’t hold up.  The host Wolverines scored one run in the fourth and one in the sixth off Stallions starter Josh McGonigle, who allowed only three hits over 5 1/3 innings.

San Juan Hills hosted Trabuco Hills on Thursday, March 12, but results were not available at press time. The Stallions continue league at San Clemente on Friday, March 13. San Juan Hills plays at Cypress on March 18 before returning to league on March 20 against Laguna Hills and March 25 against Aliso Niguel.

The JSerra baseball team has earned an elite reputation as the Lions entered Trinity League play this week.

JSerra (9-1) was placed at No. 2 in the latest CIF-SS Division 1 poll on Monday, March 9 and sits at No. 15 in the MaxPreps Xcellent 25 national rankings.

Through the season’s first 10 games, the Lions have five wins over three of the top 10 Division 1 teams, including three straight wins over No. 7 Huntington Beach—in the championship game of the Newport Elks Tournament on Feb. 28 and a nonleague doubleheader on March 3.

JSerra has been powered by its robust pitching staff all season, and that was most evident in the doubleheader sweep of Huntington Beach. Jared Glenn had eight strikeouts in the 6-1 win in the first game, and Gage Jump threw what coach Brett Kay called “the best outing we have ever seen at our school by a pitcher” in the 3-1 closing win.

Jump allowed no runs on one hit with 13 strikeouts and no walks over 5 1/3 in that dominant performance against Huntington Beach.

The St. Margaret’s baseball team kept the zero in its loss column as the Tartans scored an extra-inning win over reigning San Joaquin League champion Capistrano Valley Christian on March 5.

St. Margaret’s (6-0) posted a walk-off win with a wild play in the ninth inning against CVC. With the score tied, 2-2, and Wes Kim on first, Andrew Miehe laid down a bunt along the first-base line. CVC made a wild throw on the fielding play, and Kim ran all the way around from first to score the winning run.

The Tartans are hanging just outside the Division 5 top 10 rankings.