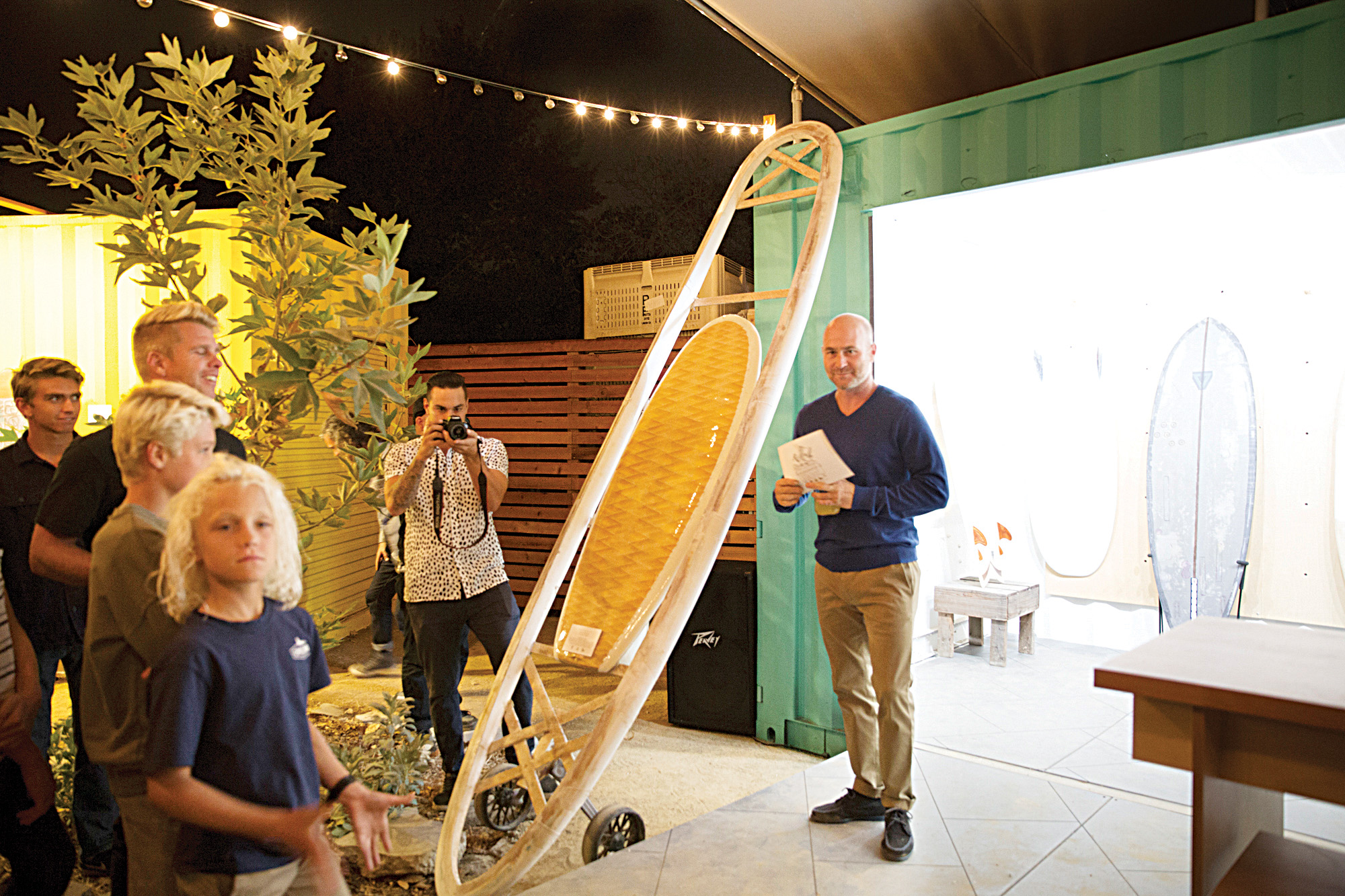 When it comes to making the ocean a little bit bluer, for three years now the Upcycle Contest, sponsored by surf company Vissla, has put sustainable, recyclable surfboard construction in the spotlight where it belongs.

Partnering with the Surfrider Foundation, the objective of the contest was “to take something that might be considered waste and create something that can be used in the ocean.”

This year, the festivities fittingly took place at the beautiful The Ecology Center in San Juan Capistrano on Oct. 20. On hand was a collection of ingenious surfboard builders from around the world who have made a concerted effort to make boards using discarded and recycled materials. Judging the contest was former shaper and Vissla founder Paul Naude, as well as Dana Point-based designer Donald Brink and Ecology Center owner Evan Marks. What started as a grassroots movement of eclectic creatives has blossomed into something special, as the quality of craftsmanship and attention to detail continues to reach new levels. Organic hors d’oeuvres were prepared by a host of local chefs and refreshments were supplied courtesy of ONEHOPE Winery and Docent Brewing. Meanwhile, Naude, Brink and Lane had the unenviable task of picking a winner.

In 2016, France’s François Jaubert won the Upcycle Contest with a board made out of recycled cardboard. Jaubert, who’s based part-time out of San Clemente, returned this year with a board built from old wood pallets and recycled styrofoam. He shaped the fins out of cardboard and fiberglass scraps he scrounged from a surf shop in Biarritz.

Meanwhile, Shane Swindler took a “beat to hell” stand-up board he acquired when he purchased a boat and converted it into a stylish little shortboard, complete with a trailer to cart the board down to the beach. The board was made using the core of the SUP, while Swindler was able to construct the trailer with the perimeter of the blank, as well as wood from a “1913 building and old aluminum golf cart wheels.”

The real showstopper of the evening came in the form of a surfboard made using 10,000 cigarette butts. Industrial designer Taylor Lane spent over a year gathering every discarded cigarette butt he could from the beaches up and down California. He then applied his experiences engineering posture-perfect backpacks and self-sustaining wall gardens to build one very unique surfboard.

Billing his project, the “Roach Tail,” Lane figured out a way to use over 10,000 cigarette butts to make the core and fins of a surfboard. He then utilized EPS foam and fiberglass cut-offs from a nearby surfboard factory, as well as styrofoam he picked up at a local fish market, to shape and build a fully functional keel-fin, swallow-tail fish. Lane then laminated the board using soy-based Entropy Resin.

In the end, Lane’s Roach Tail topped them all. Jaubert and Swindler finished second and third, respectively. For their efforts, all three designers were awarded a Vissla shopping spree.

“Everyone should be extremely proud of their work, this contest continues to demonstrate what happens when creativity and sustainability come together,” Naude said.

Ingenuity, creativity and resourcefulness of this nature deserves to be celebrated. When Vissla’s Upcycle Contest first started it was just something different, today, it’s turning into a full-blown movement. Thanks to a bounty of extremely creative entries, the contest continues to push sustainable surfboard construction in a very positive direction, and that’s something we should all be able to get behind.