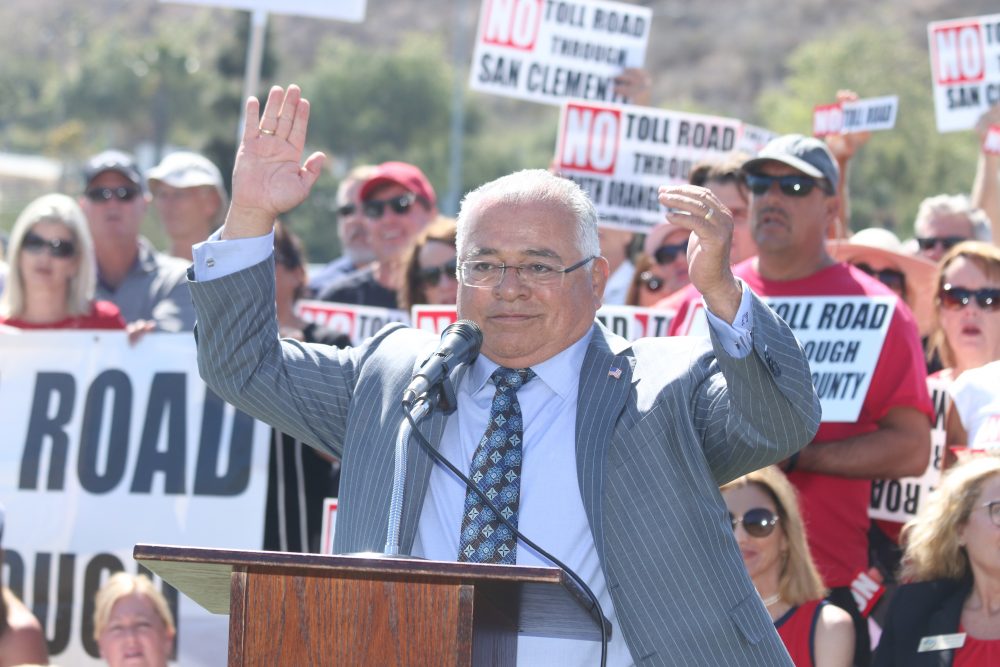 The bill would limit TCA’s ability to build toll roads; Lawmaker says the bill could be heard as early as two weeks from now

Surrounded by dozens of “No Toll Road Through San Clemente” shirts, signs and stickers, State Assemblymember Rocky J. Chávez, R-76, announced a new bill he introduced that would limit the efforts of The Toll Roads in Orange County.

The bill, AB 382, which is being attached to legislation already underway in the State Senate, would prohibit the Transportation Corridor Agencies (TCA), the administrator of The Toll Roads, from forming a new faction in an effort to construct more toll roads and it limits the TCA’s ability to increase its debt in order to pay for the roads. Currently, the TCA may have billions in debt obligation, according to a 2015 Orange County Grand Jury report.

Chávez said the bill would also remove all transportation planning functions from the TCA, “leaving the TCA with the ability to service their existing toll roads and complete their debt obligations before the existing toll roads are returned to the public,” Chávez’s prepared statement read. The notion of returning them to the public stems from the original intent of the TCA, which was to make the roads free after the debt is paid.

A press conference was held on Tuesday, May 8 at Vista Hermosa Sports Park, where nearly 100 people from San Clemente and surrounding cities joined together to announce the introduction of the bill.

Since 2016, the city of San Clemente has been fighting against proposals for toll roads by the TCA. Some of the roads are planned to be studied through San Clemente and would require, in some cases, the use of eminent domain. Many residents in San Clemente have fought against what they see as environmental hazards from the highway and increases in air pollution.

The TCA argues that traffic is slated to increase 63 percent by 2040, but the city of San Clemente recently commissioned a study that differs, showing no significant increase whether a toll road is constructed through South Orange County or not.

The official text of the bill was not available on the State Assembly website as of Tuesday night.