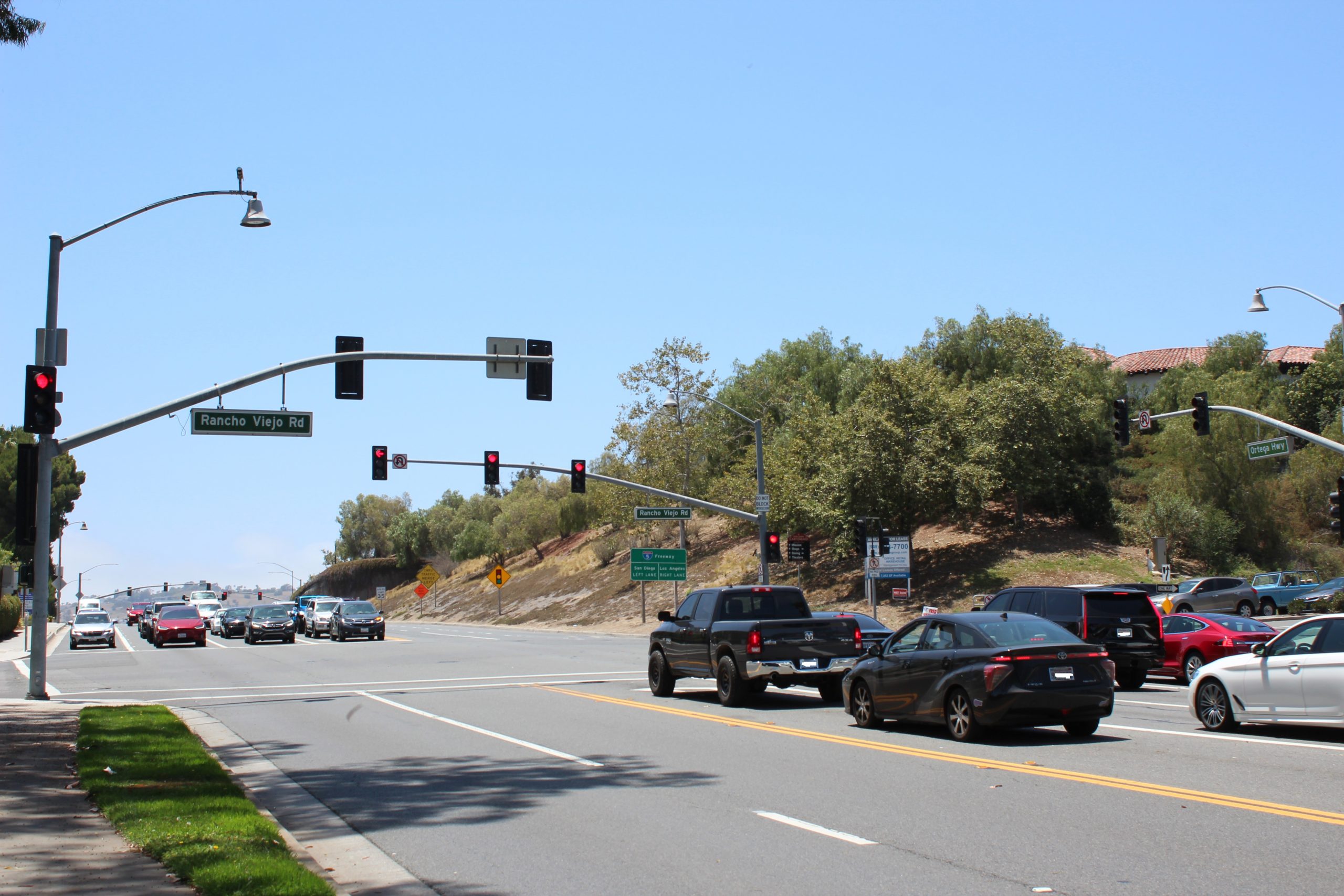 Featured image: Frequent heavy traffic on Ortega Highway causes some nearby San Juan Capistrano residents to take a back route when they want to travel throughout town. Photo: Collin Breaux

Even though married couple Rebecca and Shane Stafford live 50 feet from Ortega Highway, they rarely use the corridor to travel throughout San Juan Capistrano.

Instead—like some other local residents—they use a back way to Calle Arroyo if they want to get to other parts of the city from their Mission Springs neighborhood. Daily traffic gridlock in San Juan Capistrano is an exasperating ordeal for the Staffords, as it is for many San Juan residents.

“Just trying to get across town from 2:30 to 3:30 (p.m.), it’s just gridlock, trying to get over the freeway. St. Margaret’s (Episcopal School) is getting out at the same time,” Rebecca Stafford said. “It’s just hard to move around.”

Shane Stafford said trying to get their kids to school across town at Mission Basilica School, from their home near the intersection of Ortega Highway and Antonio Parkway, is an “absolute nightmare.”

“We moved in July 2013 from Laguna Niguel. Back then, it wasn’t too bad,” Shane Stafford said. “There was some construction going on, but it really wasn’t that bad. Since then, the traffic has gotten exponentially worse.”

The local community’s grievances over traffic came into focus earlier this year when the City Council discussed and ultimately approved allowing an In-N-Out Burger location on Del Obispo Street, provided the company meets conditional requirements relating to the site’s design. A potential opening of a new In-N-Out location at the current Marie Callender’s site earned widespread scorn among San Juan residents because of concerns the drive-through restaurant will add to traffic congestion. The Staffords and other residents sent letters to councilmembers opposing the restaurant before the vote.

The Del Obispo Street corridor near Ortega Highway—a segment derisively nicknamed “Fast Food Alley” by some local residents due to the number of fast-food locations in the area—is another area where traffic tends to build up, particularly on weekday afternoons during the school year, when children leave campus at the end of the school day.

When asked about San Juan’s traffic issues by The Capistrano Dispatch, City Manager Ben Siegel said there are a few unique challenges facing San Juan Capistrano when it comes to downtown traffic—including the numerous public and private schools in the area.

“Just off the top of my head, these would include San Juan Elementary School; Mission Basilica School; OCASA College Prep; St. Margaret’s Episcopal School; Capistrano Valley Christian School; Capistrano Union High School; Kinoshita Elementary School; Marco Forster Middle School; Del Obispo Elementary School, Fairmont School; and JSerra High School,” Siegel said in an email. “For a community of our size, this is a very high concentration of schools, and with them comes significant traffic during the school year. During summer, winter and spring breaks, the traffic volume is considerably lighter.”

Siegel also pointed to the downtown at-grade rail crossing on Del Obispo Street, which interrupts traffic flow and traffic signal coordination any time there is an Amtrak, Metrolink or freight train passing through.

Even though the Staffords also avoid the Ortega Highway area and instead take Calle Arroyo to get to other parts of San Juan Capistrano, that back route—which has soccer and softball fields, along with horseback riding trails—presents challenges of its own.

“That little stretch, which is supposed to be kind of a quiet road, is now becoming one of the main roads to get in and out of our neighborhood, because Ortega is impossible to get out of,” Shane Stafford said. “In the afternoons, it’s kind of dangerous—not in a bad way for the cars—for the kids, because there’s a ton of softball practices, soccer practices, games on the weekends.”

Ric Franzi, who also lives along Ortega Highway and opposed the In-N-Out restaurant on Del Obispo Street, is similarly irritated with local traffic congestion. He, too, tends to avoid Ortega Highway due to gridlock that can build up in the mornings and evenings.

“The traffic is outrageous,” Franzi said. “I end up having to backtrack through my neighborhood and going down to La Novia Avenue.”

Franzi called traffic build-up a “dangerous situation,” particularly when parents pick kids up from school during the school year. Conditions tend to be so rough that Franzi generally avoids going to the DeNault’s ACE Hardware store on Del Obispo Street during high traffic times, and instead goes to Home Depot in Mission Viejo. The route may be longer, but it is a more predictable trip, Franzi said.

“It’s unfortunate, because I want to spend my money in town,” Franzi said. “Adding Chick-fil-A has only made it worse. Changing the supermarket to a Target has made it worse.”

Another factor adding to San Juan’s traffic woes is how the city has become a popular tourist and recreational spot as new local non-fast food restaurants open and events have returned following the easing of pandemic restrictions.

“San Juan Capistrano is a historic, destination community and was not master-planned (i.e., unlike Irvine and some of the newer South County cities). There is limited roadway capacity both on Del Obispo and on Camino Capistrano between Del Obispo Street and Acjachema Street (i.e., one lane in each direction),” Siegel said. “Further, Camino Capistrano is the only north-south corridor west of the I-5 Freeway.  It is infeasible to widen lanes or add dedicated turning lanes without impacting businesses and other established uses along these arterials.”

Siegel went on to say that recent data suggests that current traffic on Del Obispo is actually less than it was in 2018.

“As part of the In-N-Out environmental analysis, a traffic study was performed that showed a total of 1,774 trips on Del Obispo between Camino Capistrano and Ortega Highway during the weekday peak afternoon/evening hour in September 2021 (i.e., during the school year and post- COVID lockdowns),” Siegel said. “A similar study was conducted in April 2018 (i.e., pre-COVID) as part of the Chick-fil-A environmental analysis, showing a weekday peak afternoon/evening traffic volume of 1,958 trips at this same roadway segment, or 184 more than in September 2021.”

“Of course, this is just one roadway segment, and there are likely multiple explanations, but it is an important data point to consider when faced with anecdotal observations of increased traffic along this stretch,” Siegel continued.

Potential solutions or mitigation strategies suggested by the Staffords include no more building or development past Antonio Parkway. Rebecca Stafford also recommended drivers find a travel route alternate to Ortega Highway—or at least slowing down their travel speed.

“The biggest issue is all the building that they’ve done out there—Rancho Mission Viejo, Sendero, Esencia,” Shane Stafford said. “All those neighborhoods (are) pretty neighborhoods, but they’ve all just funneled down Ortega.”

Shane Stafford, like other residents, would also prefer a sit-down restaurant at the Marie Callender’s location instead of another drive-through food place.

Steps that have been taken by the City of San Juan Capistrano—as mentioned by Siegel—include synchronizing traffic signals along Del Obispo Street from Alipaz Street and the I-5 Freeway ramps; the addition of a second left-turn lane from Del Obispo onto Camino Capistrano,  which has reduced traffic queue length; a free weekend trolley service that began in 2015; and the facilitation of more parking spots in the downtown and Los Rios Street areas.

The city will continue to “seek opportunities to reduce congestion in the downtown,” Siegel said.

The widening of Ortega Highway—a Caltrans project that will increase the number of lanes on Ortega Highway from two lanes to four lanes from Calle Entradero to 150 feet east of the city/county boundary—is also on the horizon, but it will be awhile from becoming a tangible reality. The project will provide one additional 12-foot lane in each direction, according to the project’s website.

“The project is currently in its design phase. It completed detailed ground surveys of the project site in May 2022,” Caltrans spokesperson Elizabeth Manzo said. “The team is working on updating its base map files. The phase is currently 5% complete.”

The widening has been discussed for at least a decade.

In related news coming from a City Council meeting on Tuesday, June 21, Mayor Derek Reeve brought up potentially directing city staff to undertake a study that could lead to prohibiting new drive-through restaurants on Del Obispo Street, but the matter did not move forward due to a lack of support from other councilmembers.

“We had this discussion on the City Council over In-N-Out Burger. We’ve had a number of former councilmembers that were very hostile to the idea of any new drive-throughs, particularly on Del Obispo,” Reeve said. “The more I thought about it, this is one of those issues where if you do a poll or vote of some sort with residents of San Juan Capistrano and asked if they want to ban further drive-throughs, I think the overwhelming number of residents would say they don’t want more fast food restaurants.”

Reeve also brought up differentiating between traditional drive-through lanes and parking spots for customers who order food from a phone or computer app and then go pick it up from a restaurant, the latter of which became popular during the COVID-19 pandemic and subsequent temporary shutdowns and restrictions on indoor dining.

Councilmember Troy Bourne said he was opposed to outright banning new drive-through restaurants on Del Obispo Street or anywhere else.

“I respect a previous council’s decision to make it more difficult, to where it was no longer by right where it used to be,” Bourne said in reference to the discretionary and conditional-use permits that led to In-N-Out’s approval. “I can appreciate why a certain area of town might require that, but (Reeve’s) own example we’re having here today is the whole industry changed and shifted two years ago in ways that never would have been foreseen by a council 10 years earlier, who wouldn’t have foreseen that no one would have been able to go into a restaurant.”

“We don’t know what’s going to happen five years from now or 10 years from now, so it feels to me like I have to trust the future City Councils as much as they trusted us,” Bourne continued. “If someone comes and they want to turn the auto parts store into a drive-through—that sounds like it’s going to be a combative public hearing, and they’ll have to make a compelling case for why that’s the case—but we can’t look 10 years into the future to understand whether or not it’s a good case or a bad case.”