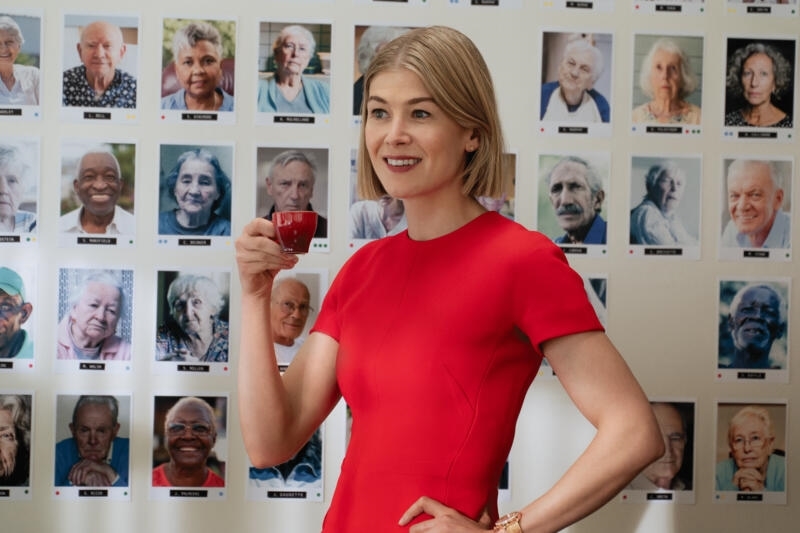 At the Movies: ‘I Care a Lot’ Cares About Dark Comedy Fans

I remember when British actress Rosamund Pike broke through globally with David Fincher’s Gone Girl (2014). There were worries from film fans that the impressive, memorable performance would pigeon-hole Pike as a messed-up, crazy lady on screen. Fortunately for Pike, she hasn’t been typecast yet.

This week, movie lovers will see her revisit the villainous femme fatale type for the first time in almost seven years with J. Blakeson’s dark satire I Care a Lot, produced for Netflix.

Marla Grayson (Pike) is a successful, professional, full-time legal guardian for many elderly patients in nursing homes. What people don’t know is that she shamelessly scams and manipulates the law into letting her take responsibility of these senior citizens just so she can make money ripping off their inheritances.

Marla’s agenda is foolproof until her latest victim, Jennifer (Dianne Wiest), turns out to have a secret relative, Roman (Peter Dinklage), in the Russian mob.

Unlike Emerald Fennell’s own recent satire, Promising Young Woman, in which Carey Mulligan’s lead is punishing people who arguably deserve it, Blakeson’s I Care a Lot has no redeeming characters to be found.

Our protagonists are unethical frauds, and the antagonists are the mafia. Even by dark comedy standards, you’re wondering a lot during the first two acts why we should care what happens to Marla once she’s in trouble.

Interestingly, I have the same feelings with Blakeson’s film that I previously had with Fennell’s Promising Young Woman. Here we have another questionable narrative with a weak third act that is just barely saved by the last 30 seconds of the movie.

But everything technical and aesthetical in I Care a Lot is fine, and Pike is good. Depending on your tolerance for morally bankrupt characters, I Care a Lot is one of those decent new releases that is perfect for streaming at home during a free night.