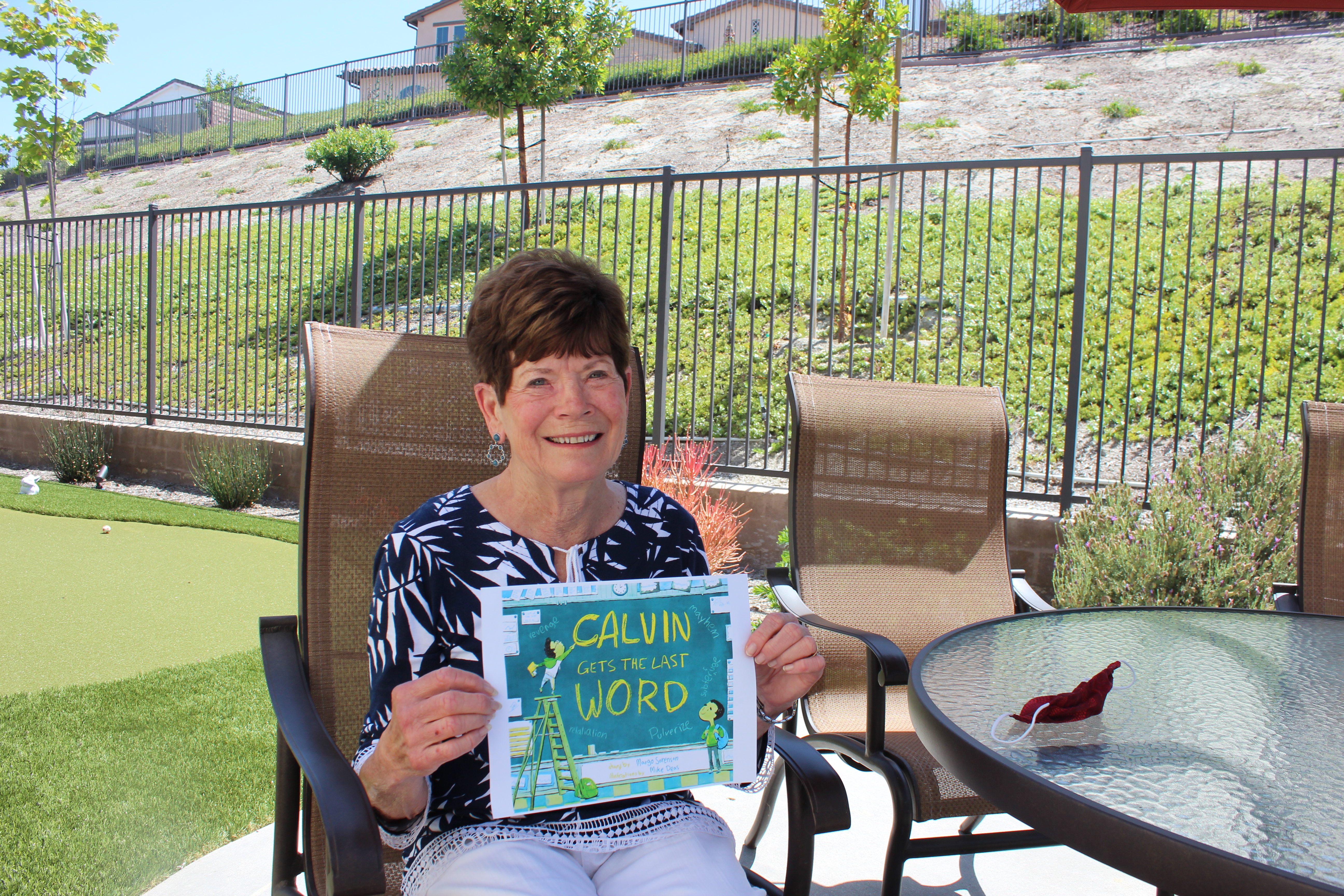 Author and Rancho Mission Viejo resident Margo Sorenson has a new children’s book coming out in October titled Calvin Gets the Last Word.

The picture book is narrated by a dictionary “who’s very tired,” because he belongs to Calvin, who is always looking for the right word for his mischievous brother.

“He goes to baseball practice. He goes on a school bus,” Sorenson said while sitting in her backyard on a sunny weekday morning, surrounded by her grandkids. “He’s in a library. Everywhere, Calvin keeps looking for the right word for his rascally brother, who makes him snort milk right out of his nose at the breakfast table, because he tells a joke right when Calvin’s mouth is full.”

Calvin Gets the Last Word is intended for children ages 4-9. Sorenson got the idea for the book as a former English teacher and previously published author.

Sorenson enjoys writing children’s books, because she read “everything I could get my hands on” when she was a kid, and she wants to give young readers that same feeling.

“It’s like taking a vacation in your brain,” Sorenson said. “It meant so much to me. They say you write at the age you still are, which would mean I’m still not an adult.”

Writing Calvin Gets the Last Word took Sorenson about five years. As with any story, she had to figure out what the characters want and are afraid of. She hopes young readers learn to keep going and persevere after reading the book, and learning words can be lots of fun.

“You have to know your character before you can write about them,” Sorenson said. “You make a plot up, and a plot is always your character really wants something, but something is keeping him from getting it, and he’s not getting it. So you throw one problem at him after another; you make him squirm. Finally, because of who he is himself, he solves his own problem.”

Her most recent book is Secrets in Translation, set in Italy. She did “tons of research” for the book. Sorenson calls writing a “process” and displayed a draft for a previous work. The crossed-out words and other edit marks are evident in the draft.

“Writing is messy work,” Sorenson said. “You have to keep revising and changing.”

Sorenson is excited for the book to come out later this year, saying she isn’t nervous since she’s had numerous other books published. She’s already received positive feedback from another author, and her grandchildren have already read the story.

Sorenson was born in Washington, D.C., and spent the first seven years of her life in Spain and Italy, according to a biography. She graduated from the University of California at Los Angeles, taught high school and middle school, and raised a family of two daughters. She is now a full-time writer, primarily for young people, and has received the national Milken Educator Award. Sorenson was also a 2003 Minnesota Book Award finalist.

“I think I’ve been very blessed and lucky to have been in the right place at the right time, because there are a lot of talented writers out there and some of them never get published at all,” Sorenson said. “I just feel really fortunate, and my family has always been really supportive of me.”