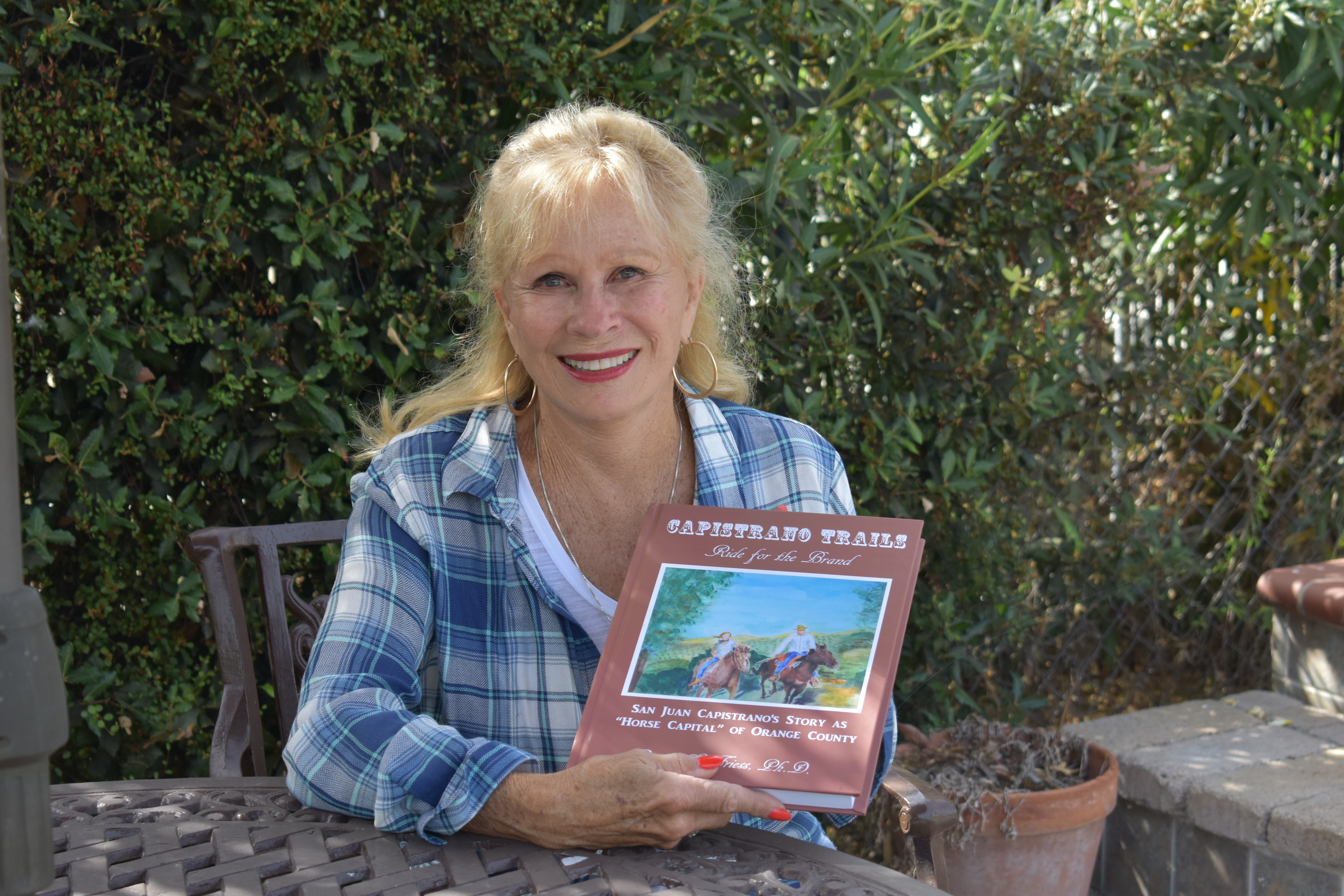 Donna Friess’ book, Capistrano Trails, Ride for the Brand, explores how San Juan Capistrano became the “Horse Capital” of Orange County over the course of 250 pages.

The book includes narration as well as first person-accounts from past and present equestrians, including Marguerite “Daisy” O’Neill, Tony Forster, Gilbert Aguirre and Kathy Holman. The book has historic and modern photos as well as illustrations dating back to 1776.

Friess, who has written multiple books over the years, said she was inspired to write this book, an oral history, when she decided to become a docent for Mission San Juan Capistrano.

As part of that process she read Capistrano Nights, a book by Father St. John O’Sullivan  recounting the oral histories of people who lived in the area during the 1800s.

“So my head exploded and you could almost see me going around, saying, ‘I want to contribute. What can I do to contribute to the history of San Juan Capistrano?,’” she said.

After learning that resident Fred Love, a longtime cowboy, was closing down the Ortega Tack and Feed store, Friess decided to interview Love and preserve his story.

That interview kicked off the start of the book.

“I settled on the idea of, ‘what if I ran around town and collected the equestrian set’s horse stories and be like Father O’Sullivan when he got the parishioners’ stories?’,” Friess said.

Writing a book on San Juan Capistrano’s equestrian history came naturally to Friess. She is, after all, an equestrian herself.

Friess spent her childhood growing up on what is now the Marina Peninsula, not far from Hoppyland, a place where famous movie and television cowboy Hopalong Cassidy often appeared.

She described being “delirious with joy” when she met Cassidy as an 8-year-old and he gave her a kiss on the cheek.

As a teenager, Friess went on an outing with a boy who would later become her husband and some other friends. The group rode on horseback.

Today, Friess’ love of all things equestrian is evident. In the backyard of her San Juan Capistrano home, she has horse sculptures. Stored toward the rear of her property she has a big bin of carrots at the ready for her horses Dancer and Blaze.

Friess’ book covers everything from the prehistoric to the present day.

In one chapter she shares information about the prehistoric horses that roamed North America (including in San Juan Capistrano); in another she discusses the origin of the Viaje de Portola, a traditional San Juan Capistrano horseback ride that began in the ‘60s; and in other chapters she talks about the beginnings of San Juan Capistrano facilities such as the J.F. Shea Therapeutic Riding Center and the Rancho Mission Viejo Riding Park at San Juan Capistrano. Those are just some of numerous topics covered throughout the book.

Friess said she set out to tell a story on San Juan Capistrano’s history that hadn’t been captured yet. She said she sees the book, and all that it captures, as one of the best things she’s done.

“To preserve our equestrian story – it didn’t exist – I’m just tickled to death that I could do it,” she said.

Capistrano Trails is available at Amazon.com in Kindle format as well as black and white print and hard-back color print. Proceeds from the book will go to support local charitable causes.