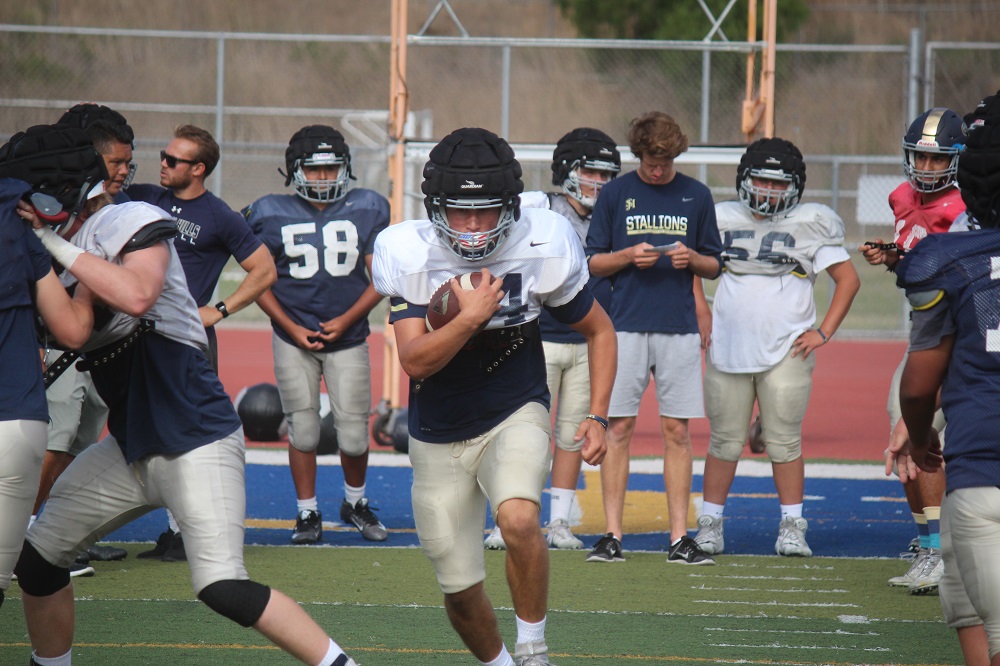 Back to School: As Summer Closes, San Juan Hills Football Learns About Its New Structure

Summer camp has closed, fall camp opens on Monday, June 30 and real, competitive football is around the corner.

San Juan Hills coach Rob Frith’s first summer with the Stallions came to a close, and the transition has continued on a positive note.

“It’s awesome,” Frith said. “The kids have been great. The coaching staff is working long hours. I feel we’ve had a very productive summer. Our practices have been very well structured.”

Frith is running with the college model, which he said most teams run now. The key to the model is efficiency as Frith said they work for an hour and 35 minutes getting kids in and out.

The model has allowed the team to build on the program former coach Aaron Flowers built up and makes for an easy transition for Frith.

“Following off of what was already established here,” Frith said, “they had a good thing going on here. It’s a wonderful school, very supportive of football. I wanted to get to know the players and know them personally. It was about building trust. During the transitional period, things are going to be okay.”

“There’s a blue collar mentality. A lot of that was already in place. We’re running these high tempo practices, and they know when we blow the whistle, its work time.”

Evidence of that work came near the end of camp as San Juan Hills took the lineman portion of the Huntington Beach passing and lineman competition on Saturday, July 21. While the competition consists of feats of strength in weightlifting and exhibitions of appetite in the hot dog eating contest, Frith was more pleased with the camaraderie shown and created.

“The way they structure it, there were some good events,” Frith said. “It’s more about team building with that group. I liked the way our guys game to compete, whether it was eating hot dogs or lifting weights. I think if they would have thrown in checkers, it would have been the same. They support each other and they work hard. It’s huge for a group of linemen where they all have to work together and be on the same page.”

The linemen group will have plenty of attention with Sean Rhyan returning for his senior season. The 6-foot-6, 295-pound, four-star tackle currently has 14 college offers including 10 Pac-12 schools along with Alabama, Nebraska, Notre Dame and South Carolina.

The defense has plenty of strong returners with guys like junior Joey Hobert and senior Caden Vaughn in the secondary and seniors Shane Roberson and Cade Albright on the defensive line. However, Rhyan and senior running back Chase Monarch are two of just a few of returners on a fresh-faced offense.

Finding who can fill those offensive slots is a big part about what summer’s been for Frith’s group.

“We needed to make sure that we are putting the right guys in the right positions to be successful,” Frith said. “Summer is about figuring out who is going to give us the best opportunity to be successful on Friday nights in the fall. Trying to see who works best. Trying to put the pieces of the puzzle together. We have a good idea of what our philosophy is going to be.”

Beside the lack of contact and pads, Frith has tried to operate summer as an extension of fall camp. The high tempo practices are structured in the same way the Stallions will prepare for games in the fall.

As fall camp opens on Monday, July 30 and the season kicking off for San Juan Hills at home against Orange Lutheran of the Trinity League on Aug. 17, Frith is like many whose excitement is ramping up.