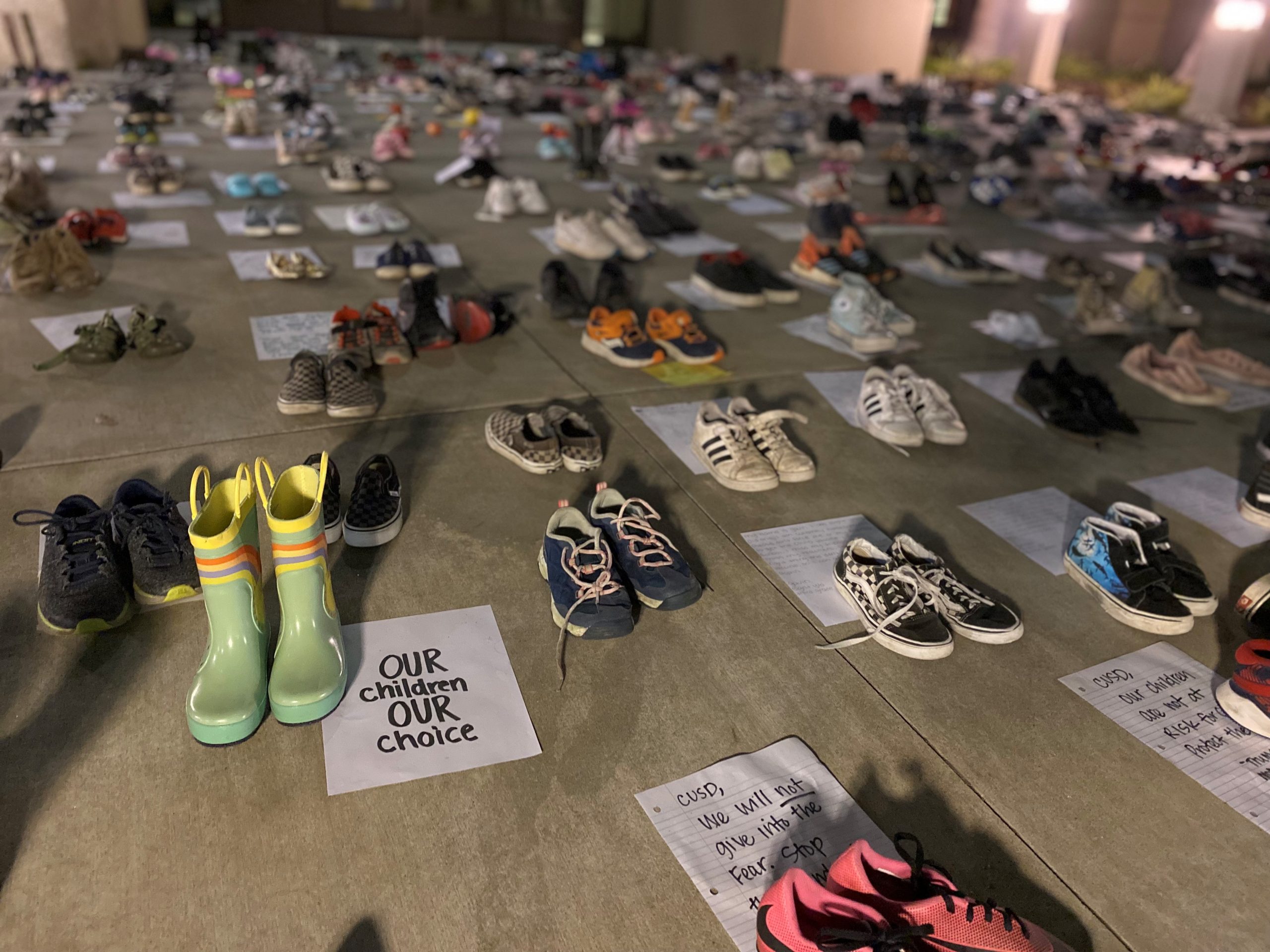 By Collin Breaux and Breeana Greenberg

Featured photo: Hundreds of shoes were placed in front of the Capistrano Unified School District headquarters on Sunday, Nov. 14, to symbolize families who plan to take students out of school if a COVID-19 vaccine mandate goes into effect for California students. Photo: Courtesy of Tania Alward.

Hundreds of shoes were set out in front of the Capistrano Unified School District offices on Sunday, Nov. 14—an unusual sight for an unusual time.

Parents and families placed the shoes there to symbolize their opposition to a coming vaccine mandate for California students, in which they’ll be required to be fully vaccinated against the COVID-19 virus to attend classes in person.

Parents of district students opposed to Gov. Gavin Newsom’s mandate have been particularly vocal, often showing up at Board of Trustees meetings to denounce the eventual requirement.

The shoes were accompanied by anti-mandate notes that had slogans like “Our children, our choice” and “No shots.” One of the parents who placed shoes at the CUSD headquarters was Amber Smith, one of the founders of Moms on the Ground—a group that recently formed in opposition to the mandate and organizes events through social media.

Smith, a San Clemente resident, said that more than 600 pairs of shoes had been set down over the weekend.

“I went there myself to put two pairs out for my kids,” Smith said. “It’s showing the district, listen, these are the parents that are going to pull their kids out if the mandate goes through.”

She said she is opposed to the mandate because the COVID-19 vaccine hasn’t had any long-term studies on its effects. Smith said she is not anti-vaccine, and her children have received other required vaccinations that have been around longer.

“I’m not going to tell somebody don’t get the vaccine,” Smith said when asked her response to people who say the COVID-19 vaccine is safe and helps prevent the spread of the pandemic. “Some of my family members have been vaccinated. It is my personal choice that me and my family are not vaccinated.”

Smith, who acknowledged she is a not a doctor, said a COVID-19 vaccine should not be mandated for children to get a public education.

Asked if she planned to pull her children from the district if the mandate goes through, Smith said she already pulled her younger daughter out for homeschooling and would also pull her older daughter—who is a senior in high school—if the requirement was implemented before graduation.

The CUSD Board of Trustees recently approved sending a letter to state officials requesting a change in the vaccine requirement, though district officials and staff have repeatedly emphasized they must follow state health guidelines.

“However, most parents were/are not satisfied with this sole step of action from the CUSD school board thus far,” Tania Alward, a South Orange County parent and teacher who’s resided in San Clemente for 34 years, said in an email.

“The large group of parents in attendance that night wanted the CUSD school board to make a public decision for Capistrano Unified School District to not comply with the mandate,” she continued.  “Therefore, like-minded parents are working together to schedule sit-outs/events to peacefully oppose Newsom’s mandate and encourage the Board of Trustees of CUSD to take a stronger stance against the mandate.”

The shoe placing coincided with one such planned school walk-out on Monday, Nov. 15, to further express opposition to the vaccine mandate. A similar walk-out previously happened Oct. 18—when the district saw a 233% increase in absences compared to the week before.

“We are funded based on enrollment,” CUSD spokesperson Ryan Burris said. “If enrollment declines, so does our funding.”

The walk-outs come as CUSD faces a continuing decline in enrollment.

“We are a declining enrollment district so we do expect some decline,” Burris said. “However, this school year and the last we have experienced a decline that is higher than planned.”

San Clemente’s schools saw the largest increase in absences, with absences up 528% from Oct. 11 to the Oct. 18 protest. The city’s schools have the largest number of students with a total of 8,907 students enrolled.

Forty-four percent of students enrolled at Palisades Elementary School in Dana Point were absent on the 18th compared to 8.5% on the 11th.

Twenty-three percent of students at Dana Hills High school were absent on the day of the protest compared to 7% a week prior.

Sixty-four percent of students enrolled at Truman Benedict Elementary School in San Clemente were absent on the 18th compared to 10 % on the 11th.

Thirty-nine percent of students enrolled at San Clemente High School were absent on the day of the protest compared to the seven percent absent a week prior.

Twenty-seven percent of students at San Juan Elementary school were absent on the 18th compared to the eight percent on the 11th.

Eighteen percent of students at San Juan Hills High School were absent on the day of the protest compared to five percent a week prior.