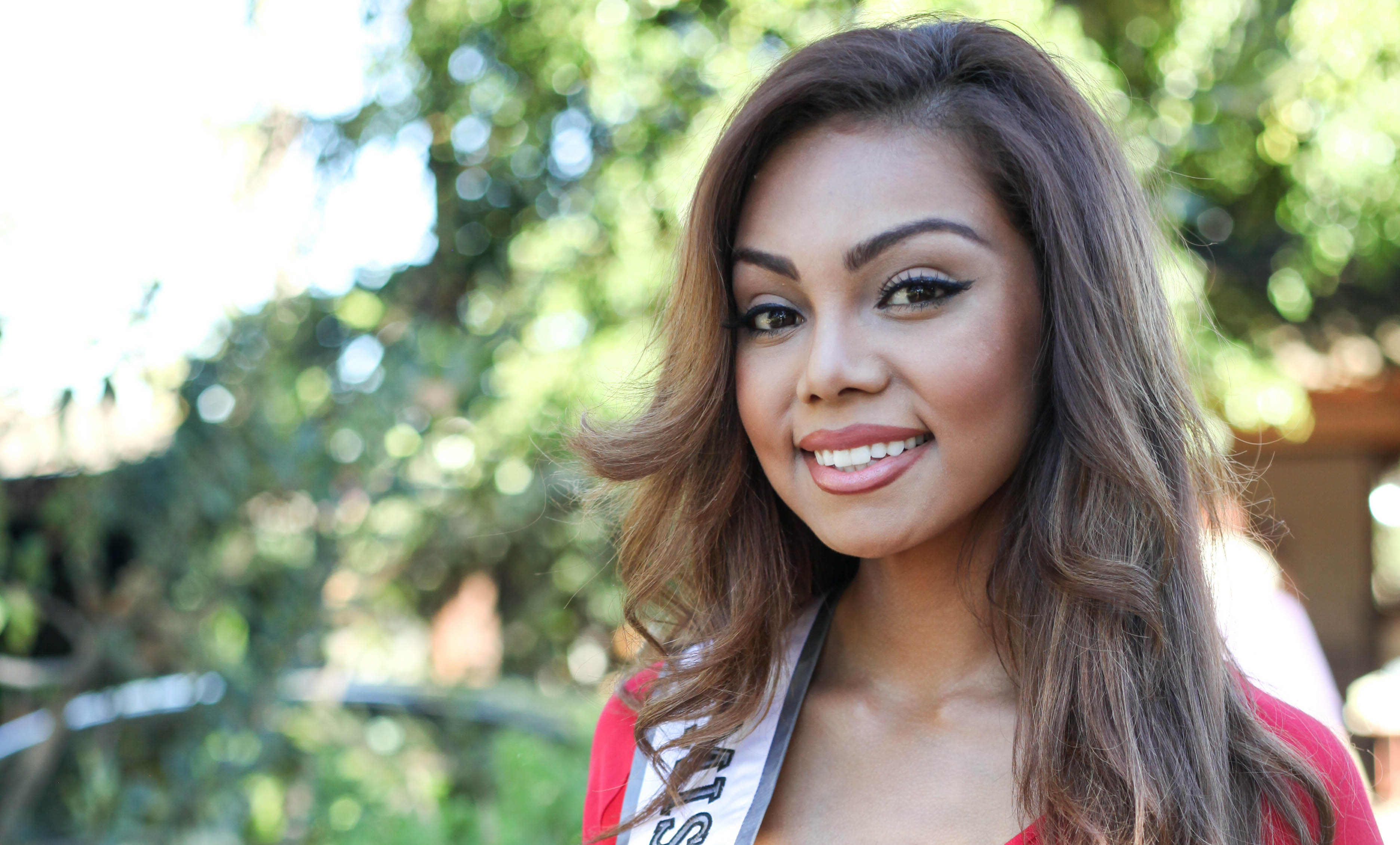 After winning the 2016 Miss Orange County pageant in August, Berlin Armenta is on her way to compete for the title of Miss California USA.

She wasn’t endlessly coached and groomed for beauty pageants at an early age like the toddlers on television. Rather than flashing a smile and wishing for world peace, she’s focused on making a difference in her own community by spreading a message of kindness and anti-bullying.

At the age of 18, Berlin lives with her family in San Juan Capistrano, works two jobs, attends college and supports her parents and younger brother, all while practicing for pageants on the weekends on a makeshift runway in her garage.

“I wake up every day with determination; I live off a schedule,” Berlin said. “I’m really focused on the future. When you have a goal and you put your mind to it, you will accomplish it.”

It’s not hard to imagine that with such determination and drive, Berlin found herself last August at the Miss Orange County pageant. And she didn’t just compete—she won the crown. Now, as the 2016 Miss Orange County USA, Berlin has set her sights even higher—on Miss California USA.

A Young Competitor in the Making

Berlin set the bar high for herself at an early age.

As president of her fifth-grade class at Kinoshita Elementary School, she decided pen a letter to President Barack Obama to let him know that not only was she too a president, but perhaps one day she’d be the first woman president in the White House.

Obama responded that he was proud of her and noted that she has a “lovely family”—she had included a photo in their correspondence.

She took a step closer to realizing her potential at the age of 9. She and her family used to lie on their living room floor every Saturday morning and watch television, and on one such day, she saw a commercial for the Bellas Artes modeling academy in Anaheim. She knew instantly that she wanted to model. Her parents called the next day, and she auditioned the following week for a scholarship from the academy.

Ever since her first audition, Berlin has continued competing in an array of contests and pageants while dabbling in modeling, acting and dancing. And while troubles have come in and out of her life—bullying, struggles with weight, low grades in school—she said her family has been there through it all.

When her parents were in a pinch with only one car, her dad would bicycle to work. If they were completely without transportation, they’d take public transit together, oftentimes across Orange County and Los Angeles to modeling or pageant opportunities.

“My dad and my brother are both my No. 1 fans; my parents are so supportive,” Berlin beamed during a recent interview at her home. And her 12-year-old brother, Christopher, is proudly following in her footsteps—from taking musical theater and drama in school to modeling in his free time.

“She’s inspiring because of all the obstacles she’s overcome,” Christopher said, sitting across from his big sister. “I want to grow up to be someone like that.”

Berlin and Christopher, and their parents, Hugo and Celina, recall with fondness—and some humor—the time the two competed on “Toddlers and Tiaras” in Las Vegas. Berlin was 12 years old and it was their first time at a major hotel.

“We couldn’t afford to stay there for two days, so we left our house the day of the competition at 3 a.m., and my competition started at 8 a.m.,” Berlin said. “It was the first time we had been to Las Vegas ever in our lives, and here we were in an old red minivan, while it was pouring rain. We were afraid the car was going to break down on the way there!”

After arriving at the show, Berlin and her family learned it would cost about $400 for her hair and makeup. After a disastrous run-in with a hair stylist who had perhaps never seen curls before, they decided to take matters, literally, into their own hands.

“My parents were brushing my hair and making curls with their fingers and some gel,” Berlin recalled, smiling.

And as she watched the other children receive orders from their parents, she said she felt proud that her mom and dad were the ones smiling—posters in hand—cheering her on.

“My parents told me to relax; they’ve always been like that,” Berlin said. “They encouraged me to be myself on stage, to not pretend to be someone I’m not.”

Berlin’s family has lived in San Juan Capistrano for 23 years, but in their low-income situation, she said that meant moving from their Los Rios Street home to renting a room out in another family’s house—and sometimes housing with multiple families—before they found an apartment of their own on Calle San Luis.

During these transitions, Berlin was dealing with depression and bullying at school.

“People were calling me fat. It was a, ‘You’re in the pageant industry and overweight’ kind of thing,” she said. “Those two things don’t go together. I was really affected by it, but I didn’t really talk about it.

“I didn’t know who to turn to. It didn’t feel like my friends were my friends at the time,” she said. “I was constantly questioning myself. There were times when I went home, did homework, took a shower, and cried in my bed.”

Berlin said her older brother, Irvin, helped add some structure in her life by exercising with her early each morning. Her family also became Christians, and she joined Mission Cristiana Fuente de Vida church, where she found companionship and acceptance. She became more focused, more balanced and, as she puts it, she found herself.

“I may not live in a big house, and I may not dress like I have a lot of money, but those are all materialistic things,” Berlin said. “What counts is what’s in your heart.”

To help ensure that other children don’t go through the same experiences with bullying, Berlin is currently reaching out to schools in her capacity as Miss Orange County as part of her Kindness Begins with Me campaign. She hopes by sharing her “testimony of hope” and the effects of bullying that she can relate to kids and encourage them to reach out to friends, family and teachers if they need help.

“I’m not the only one who struggled with this,” Berlin said. “There are so many people out there who want to succeed but don’t know how, or they’re just lost because their family is going through something. I want to find out who people are and hear their testimony, because I wish people would have been there for me. I can relate to them; tell them they’re not alone.”

Today, Berlin is attending Saddleback College part-time, working at Naficy’s Medical Group and 3:16 Bakery Shop, and is preparing to compete in the Miss California USA pageant in Long Beach on Dec. 4-6. She’s currently raising the funds to make it there and said she’s ecstatic—and a bit nervous—about competing for the Miss California crown.

“My goal is to focus on expanding my anti-bullying campaign and sharing my testimony of hope,” Berlin said. “It’s not about displaying a pretty face and asking for world peace. It’s about actually having a goal and accomplishing it.”

She’s also looking forward to becoming a full-time student next semester—her long-term dream is to become an undercover detective. To get there, she plans on studying criminal justice, transferring to San Marcos State University for a bachelor’s in crime scene investigation and joining a police academy after that.

Berlin’s older brother, Irvin, is currently studying for his masters in clinical psychology at Cal State Fullerton and said he’s proud of his sister for committing herself to following her heart and making opportunities—not just waiting for them to come to her.

“It’s motivational, to say the least,” Irvin said. “Perseverance is very important and I think she has that. That’s hard to find. She has accomplished a lot of things by now, and she can only grow more.”
[hr]

Anyone interested in supporting Berlin as she competes for the title of Miss California USA 2016 can send sponsor requests or donations to armenta_berlin@yahoo.com, or visit her online GoFundMe campaign at www.gofundme.com/r926enb5.