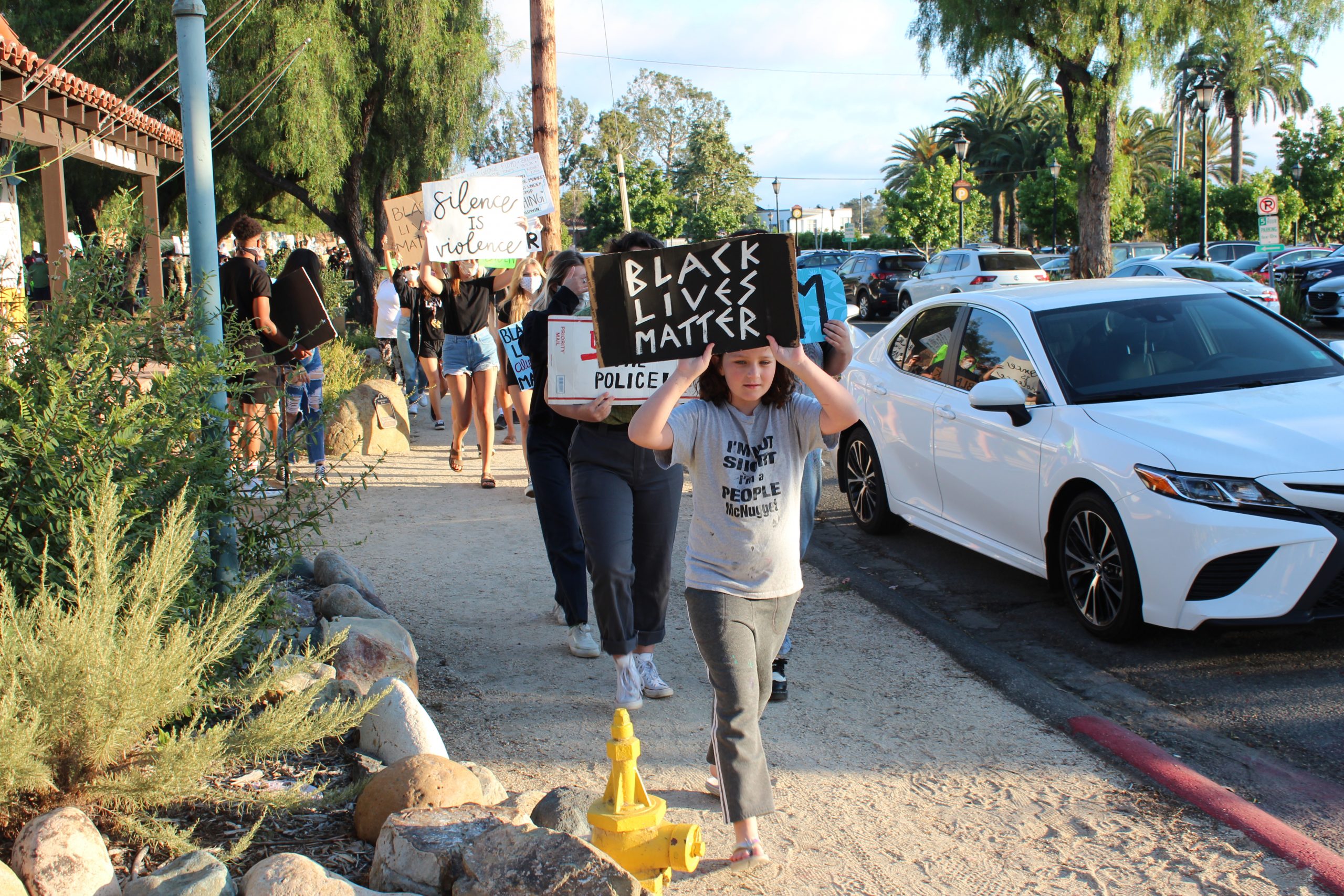 Another “Black Lives Matter” protest in San Juan Capistrano on Friday, June 12, again featured speakers calling for an end to institutional racism and social injustice, demonstrators marching throughout town while carrying signs, and the crowd taking a knee in silence.

The first 2020 “Black Lives Matter” protest in San Juan Capistrano was held June 3. The June 3 and 12 protests were peaceful.

Jessica Conquest, a family and marriage therapist who helps children and adults in Los Angeles and Orange County, was one of the guest speakers as the June 12 event began at Historic Town Center Park. Conquest told the kids gathered they have the power to impact the rest of the world.

“In the last few weeks, there’s been a theme in my life. I’ve been dealing with a lot but the theme is: my soul is singing,” Conquest said. “My soul sings because through this revolution, I’m surrounded by people who believe, like me, that my Black life matters.”

Conquest said a racist system in America has “thrived” for over 400 years, and dismantling it will be a “long” struggle and “not a quick fix” brought about by just one protest, tweet or death.

“That’s why I’m so proud to see so many kids here,” Conquest said. “Our kids are going to tire. Make sure you are filling them with motivation and inspiration.”

Protests against racism and police brutality have happened in South Orange County and throughout the world after George Floyd, a Black man, died in Minneapolis on Memorial Day after former police officer Derek Chauvin forcibly placed a knee on Floyd’s neck while Floyd was subdued on the ground. Chauvin is charged with second-degree murder, third-degree murder and manslaughter, and charges of aiding and abetting have been brought against three other former officers on the scene.

The June 12 protest in San Juan was a collaboration between the Ladera Ranch Social Justice Committee and South Orange County Black Lives Matter, a news release said. Organizers were in talks with law enforcement before the event to ensure the safety of those involved. Attendees were able to sign petitions for related causes, donate to organizations like the NAACP and ACLU, and register to vote during the rally. Orange County Sheriff’s Department officers were at the June 12 protest to monitor the situation from the sidelines, similar to the June 3 protest.

“Racial injustice is still very prevalent throughout Orange County,” Solei Sarmiento, a head organizer and UC Berkeley student, said in the press release. “Work still needs to be done to create a more equitable future for people of color.”

Samuel J. Vance, a steering committee member for the OC Racial Justice Collaborative, spoke at the June 12 event. Vance said things are currently moving fast in America and recapped recent changes, including various police departments and places banning the use of chokeholds.

Vance also said though a majority of people in the country want to see some type of reform when it comes to police behavior and systemic racism, activism must continue so those changes become reality.

“Just like in the 1960s, where they had the Voting Rights Act, The Civil Rights Act, fair housing, that did not automatically guarantee a thing,” Vance said. “There were federal judges and courts of appeal ruling on different things going deep into the 1970s. It was not until the 1980s that our country became fully civilized saying there was equal protection under the law and if you were caught, there would be consequences.”

Fiona Meehan, who grew up in South Orange County and recently graduated from Tesoro High School, spoke about her personal experiences with racism. Meehan said she has been called racist slurs, encouraged her peers to call out racist and homophobic comments from others, and said White privilege should be acknowledged. Attendees also called for the recognition of transgender lives and LGBTQ+ rights.

San Juan Capistrano City Councilmember Sergio Farias attended the protest and spoke, saying he was against systemic racism and it should end immediately. Farias noted the number of young people at the rally, and encouraged them to continue staying involved in politics through jury duty and city government, in addition to protesting.

Cars driving by honked in approval when the protesters marched through San Juan, including by San Juan Elementary School. The crowd chanted, “Say her name! Breonna Taylor!” in reference to Taylor, a Black female who was fatally shot by police officers in her apartment in Louisville, Ky., when police were executing a no-knock warrant. Taylor’s boyfriend Kenneth Walker fired at police because he believed a robber was entering the apartment.

A single counter-protester at the San Juan rally held a sign saying “Hate has no home here support law & order.” The counterprotester declined to give his name to The Capistrano Dispatch. An onlooker at a restaurant told the protesters to go back to school and work when they passed by during the march.

Some activists have called to defund the police. In a statement on social media, Orange County Sheriff Don Barnes said politicians seeking to defund the police are “relinquishing their responsibility to provide for public safety and preserve the rule of law.”

“Law enforcement must have resources to respond to 911 calls, prevent crime, protect the innocent from those seeking to do harm, and address threats like domestic terrorism and drug trafficking,” Barnes said.

“I actually want to increase law enforcement personnel if the budget allowed for it,” Reeve said.