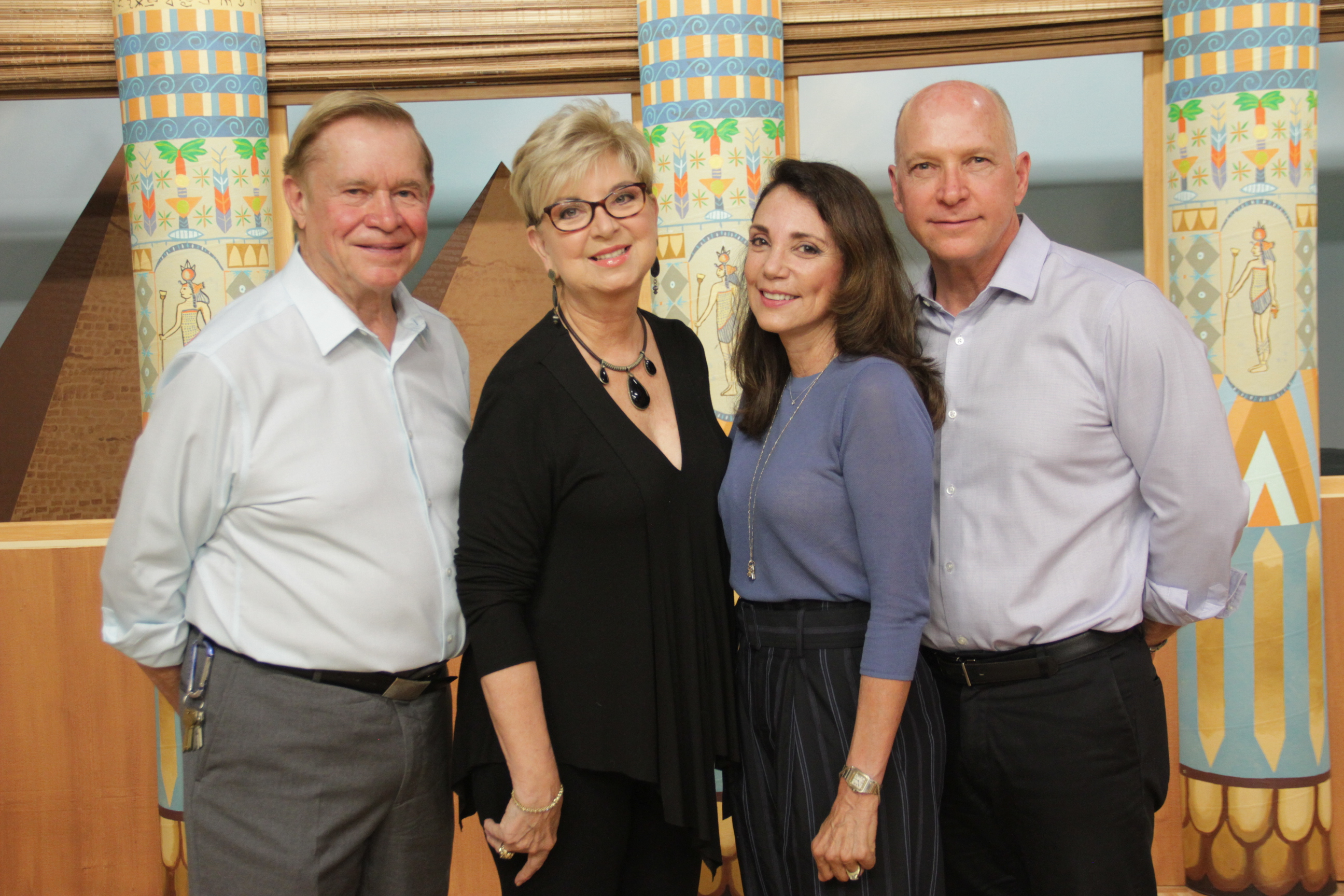 Inside the Camino Real Playhouse, San Juan Capistrano’s signature performing arts center, a hint of excitement is in the air as attendees grab their last-minute drinks and snacks at the concession stand.

Guests mingle about and continue filing in as executive producers Tom Scott and Beverly Blake make their rounds, greeting folks who have come for the opening night of their latest production, Murder on the Nile—Agatha Christie’s murder mystery play written in 1944.

Paintings of Egyptian pyramids adorn the walls of the space while Arabic music plays over the PA system to go along with the theme of this season’s first show, which will run through Sunday, Oct. 6.

At 7:59 p.m., the lights flash, alerting everyone to head to their assigned seats as the play is about to get underway. With everyone settling in, Scott takes the stage to deliver a few opening remarks.

“Thirty years ago, I was sitting in front of an archaic computer—that’s probably in a museum now—trying to figure out what a nonprofit was,” Scott said, garnering laughs from the audience.

“And we got it!” he exclaimed, referring to the Playhouse’s parent organization, South Orange County Community Theatre, receiving its 501c3 status.

On this cool Friday night, the Playhouse wasn’t only launching its production of Murder on the Nile. It was also kicking off the 30th anniversary season of a local community of thespians and volunteers dedicated to performing arts.

Thirty years ago, Scott and his wife, BJ Scott, started the nonprofit group South Orange County Community Theatre, which has become primarily known as the Capistrano Center for the Performing Arts. At that time, the idea of having a physical Playhouse was merely a dream for the Scotts, who used to direct performances with fellow thespians in various South County locations.

“My wife (BJ Scott) and I founded the group and did the nonprofit papers in our living room,” Scott told The Capistrano Dispatch in a sit-down interview at the Playhouse weeks before opening night.

“We had no idea where we’re going to house it, and we got the nonprofit certification for the theater in December of ’89,” he added. “Prior to that, we had already started some reader’s theatre and performing and building a little bit of a following.”

Before sitting down just to talk about the nonprofit’s backstory, Scott and Blake gave The Dispatch an exclusive tour of the Playhouse, showing off its history as a performing arts center in South County.

The back of the house is a museum of sorts, as rows of shelves containing props and decorations used in previous performances line the backstage area. And along the hallway of the theater, photographs hang on the walls highlighting each season’s series of shows from the last 30 years.

“This is our Walk of Fame right here,” Scott said, pointing to some of the pictures. “This was our early years before we were in the building, when we first started. So, our very first show was Shakespeare’s A Midsummer Night’s Dream at Salt Creek Beach in Dana Point.”

Without an official home in the nonprofit’s earliest years, the group of theater actors would perform in Dana Point and Laguna Beach. Many of the members would also come from San Clemente’s Cabrillo Playhouse, of which Scott’s wife was a former president.

“We were wanting to do a theater in San Juan, and that’s when we started the nonprofit organization to form the theater group,” Scott said.

By 1991, the Scotts were able partner with the city to lease the former Pacific Bell office building, off Ortega Highway, along Camino Real—where the Playhouse gets its name.

“Basically, the city essentially gave us the building,” Scott said, adding that a condition of the lease agreement with the city requires the group to pay for all the expenses related to keeping the building’s lights on.

Though it was the group’s newfound home, it was less than appealing. According to Scott, the foundation of the building was a feed store from the early 1930s before it was converted for Pacific Bell’s offices.

“When we moved in, that’s what it was; it was a derelict office building. The roof was leaking,” Scott said, before Blake chimed in to note that it had been derelict for 13 years before the group took it over.

“There were rats and skunks, all kinds of things—rodents that we had to throw out, and it was really, really something else,” Scott said, completing this thought.

Both Scott and Blake share extensive backgrounds in arts and theater.

For Scott, who has degrees in math and physics, theater has been a hobby of his since he was a child. One of his earliest experiences in performing arts was in the second grade, when his music teacher in rural Kansas was putting on an operetta and cast him along with several of his classmates as pixies.

“Consider second-grade farm boys from Kansas trying to get them organized … she had so much trouble, but she knew I could take care of it,” he recalled. “So, she took me aside one day and said, ‘OK, Tom, you’re going to be the lead pixie, and you’re going to make sure everyone lines up in this order and comes on stage at the right time.’ I like to tell people I’ve been the lead pixie ever since.”

Throughout his career as a teacher of chemistry, physics and math, as well as a computer programmer, Scott continued to imbed himself into various theater groups, performing in plays, building sets and directing shows.

As for Blake, the daughter of a painter, she was raised to be an artist herself and was an art major in college. She ended up doing administrative work in the shipping and transporting industry before moving over to sales and marketing.

During that 35-year stretch of her career, she admits, she didn’t pick up a paint brush.

“Then I painted a few paintings to kind of figure out if I still had it, and I did,” she said.

Blake also recalled of her childhood that while her mother would paint in the early morning, she would listen to records of Broadway show tunes. Listening to such recordings, she said, is how she grew fond of musicals and their stories.

It was around the mid-’90s, Blake said, that she was living in Laguna Niguel and saw her first Playhouse show, which was a production of Shakespeare’s The Tempest. She would continue attending shows throughout the years, but in 2003 she decided she wanted to work with the group painting their sets.

“This was just a natural fit between my business background and my artistic skills,” she said, pausing for emphasis. “It just worked.”

“I’ve always been involved in theater and enjoyed musicals all my life,” she later added. “So, coming here wasn’t out of the blue, and I was always attending plays here.”

When she first began volunteering, it had only been a couple of days before she was handed a key to the Playhouse.

“On my third day, Tom or BJ brought me a note for somebody who wanted to volunteer, so all of a sudden I was in charge of all the volunteers then, too,” she said. “And two weeks later, I was invited to the board and about a week or two after that, BJ retired.”

BJ Scott retired from the group in 2003 amid health concerns, Tom Scott explained.

To her credit, Scott continued, Blake “really has helped a great deal in the makeovers of the facility, the painting in the lobby, the painting of the hall here, all kinds of things we have here.”

Scott said that before Blake came along, he would meet with a show’s director about the set pieces he had designed and ask, “OK, I’ve got this color paint and this color paint; what would you like best?”

After Blake officially came aboard as an executive producer, however, the Playhouse saw a major turnaround in its production value, Scott said.

“With the literature, the creativity of the artwork for the shows, the artwork and creativity on the sets, the whole process, picking the shows, working with other people, bringing things together, it really was able to kick things up a lot,” Scott said of Blake.

Blake notes that while they’re the executive producers, they’re supported by a “massive team” of volunteers.

“We are not the two people that run the theater, we’re just in a position where we’re the last word,” Blake said.

Throughout any given season, the Playhouse has roughly 60 volunteers who help support the production, and that’s not including the actors, according to the producing team.

Additionally, the two give a lot of credit to the group’s artistic director, Leslie Eisner, and managing director, Darrell Hill.

“There’s so much stuff here, a title doesn’t mean that much. She’s artistic director, she does so many more things,” Blake said of Eisner. “Everybody here just carries a lot of weight. It’s just the way things have to be to get things done.”

Blake later added that their army of volunteers, both in terms of support staff and reoccurring set of actors, have become a family throughout the years.

“I have a whole family here now, and that’s the thing that everybody who gets involved with us . . . that when they come back here, they’re coming home,” Blake said, noting that the actors regularly audition at other theaters.

Throughout the group’s 30-year run, Scott and Blake said the biggest takeaway has been that taking risks and chances are oftentimes necessary in order to put on a good show.

Citing one example, Blake said she and Scott had met with an artistic director for a musical years back called Into the Woods. The director wanted to install a track on the ceiling so they can slide tree props from side to side between scenes.

“He told us he wanted tracks, like closet tracks on the ceiling, so we could build trees, just flat images of trees . . . with one tree on each,” Blake said.

“And everything he was asking for, we just kept saying, ‘Yes, we can do it.’ . . . it’s pretty unusual for us to just say ‘no’; we always try to figure it out,” she continued. “He walked out the door, and I turned to Tom and said, ‘What the hell are we going to do?’ That was so memorable; we did it.”

The moral of the story, Scott said, was to embrace the challenges.

“One of the things that we learned from that experience is don’t be afraid to take a chance,” he said. “And we stick our neck out for new playwrights, for challenging sets. We do amazing things in this little space here.”

Performances for Murder on the Nile will run Fridays and Saturdays at 8 p.m. and Sundays at 2 p.m. through Oct. 6. For ticket prices and additional information on other upcoming shows for the Playhouse’s 30th season, go to CaminoRealPlayhouse.org.