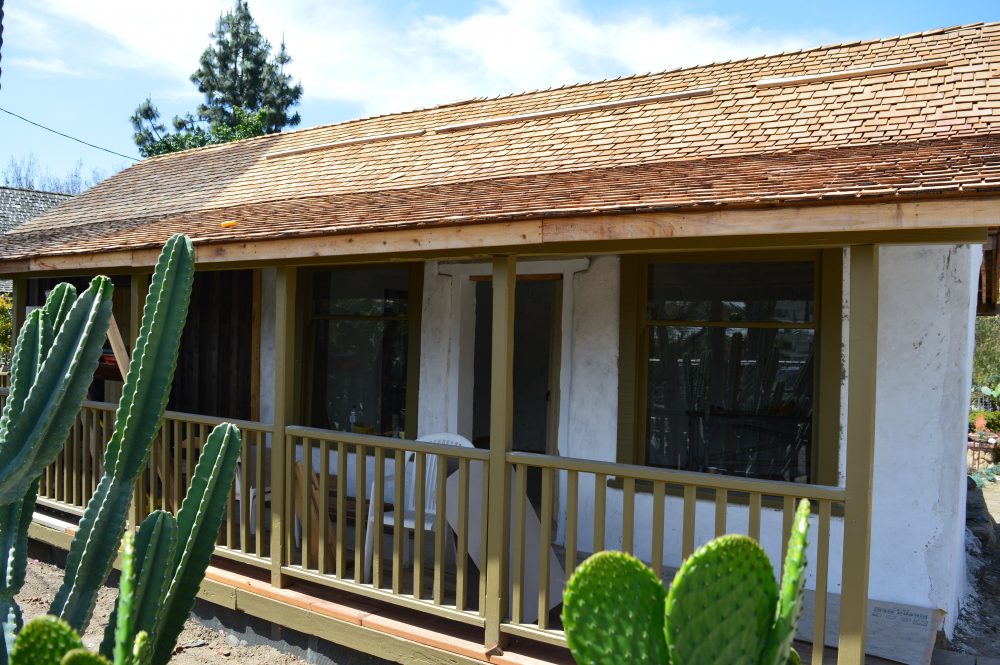 On a lazy afternoon on Los Rios Street, people stroll along the mom-and-pop shops and historic structures of one of California’s oldest residential streets.

Tourists and locals alike leisurely admire historic San Juan Capistrano, but there’s a faint sound of tools at work upon walking past the Silva Adobe. Still wrapped by chain-link fence and boards, the Silva Adobe’s roof timidly pops above visual blockades, but not for long.

After nearly five years of volunteer restoration efforts, the San Juan Capistrano Historical Society will be unveiling the Silva Adobe for the first time to the public at Fiesta Days from 11 a.m.-3 p.m. on Sunday, April 29.

Upon walking into the historic building, it’s surprisingly cool and breezy. Birds chirp in nearby trees, and the ground shakes in the adobe as a train rolls by.

Scott Gates, 53, is wielding tools as he puts the last touches on the Silva Adobe. Gates is one of a handful of volunteers who has been working on the project. Gates has been working on it since day one, nearly five years ago, and is a Historical Society board member who was born and raised in San Juan Capistrano.

The Dispatch asked Gates how the restoration went, and what people can look forward to:

The Capistrano Dispatch: What’s the history of the Silva Adobe?

Scott Gates: We believe it was built sometime in the 1780s. There used to be around 70 adobes on Los Rios Street, but now there are only three or four left. The adobes were housing workers when they were building the mission, which was finished in 1794.

Q: What inspired the Historical Society to restore the Silva Adobe?

A: Well, we were initially told it was a tear-down. The ceiling was almost 6-inches shorter on one side than the other; the sand layer under the building twisted it. With the San Juan Creek here, everything sort of pulls toward the creek due to the weather. So, we just built (the adobe) stronger.

Q: How many resources did the Historical Society save by using volunteers to restore the Silva Adobe?

A: Probably around $50,000-$60,000, all of the funds went to the materials. There will be a paper drafted so that other nonprofits won’t have to hire high-tech contractors to come out for ungodly amounts of money to do it; it shows how to do it yourself. It just takes time and patience. We have background in construction, but this is kind of new to us. This was my first time with adobe. You know how to plaster, some of the basics, but (in this process) you learn how it actually all works. I probably spend about 20 hours per week doing the work, but I enjoy it.

Q: How is the adobe different from before?

A: We had to implement air conditioning to preserve artifacts that will be in here. There was a poured concrete porch, but we tore it down, made the porch from wood, and built an (American Disabilities Act) compliant ramp. However, we did as much as we could trying to perfectly preserve it. For example, we did save some concrete—one of the concrete steps up to the porch—that includes a written signature of a former resident.

Q: In what ways did you preserve the original structure?

A: In adobe, you can re-use the materials including the bricks (made of sand, silt and clay). It’s like a plaster, you smear it on the outside and that’s what makes all of this smooth. Also, we saved many of the original walls and the ceilings; but also used the original floor as a third wall, but kept the original ceiling. The only thing that’s new is the floor.

Q: What should people keep in mind when looking at the Silva Adobe?

A: Basically we’ve re-engineered it, so we’ve saved it. We actually dug underneath the walls and we put a foundation like we would today; using the techniques and materials they would have used back then.