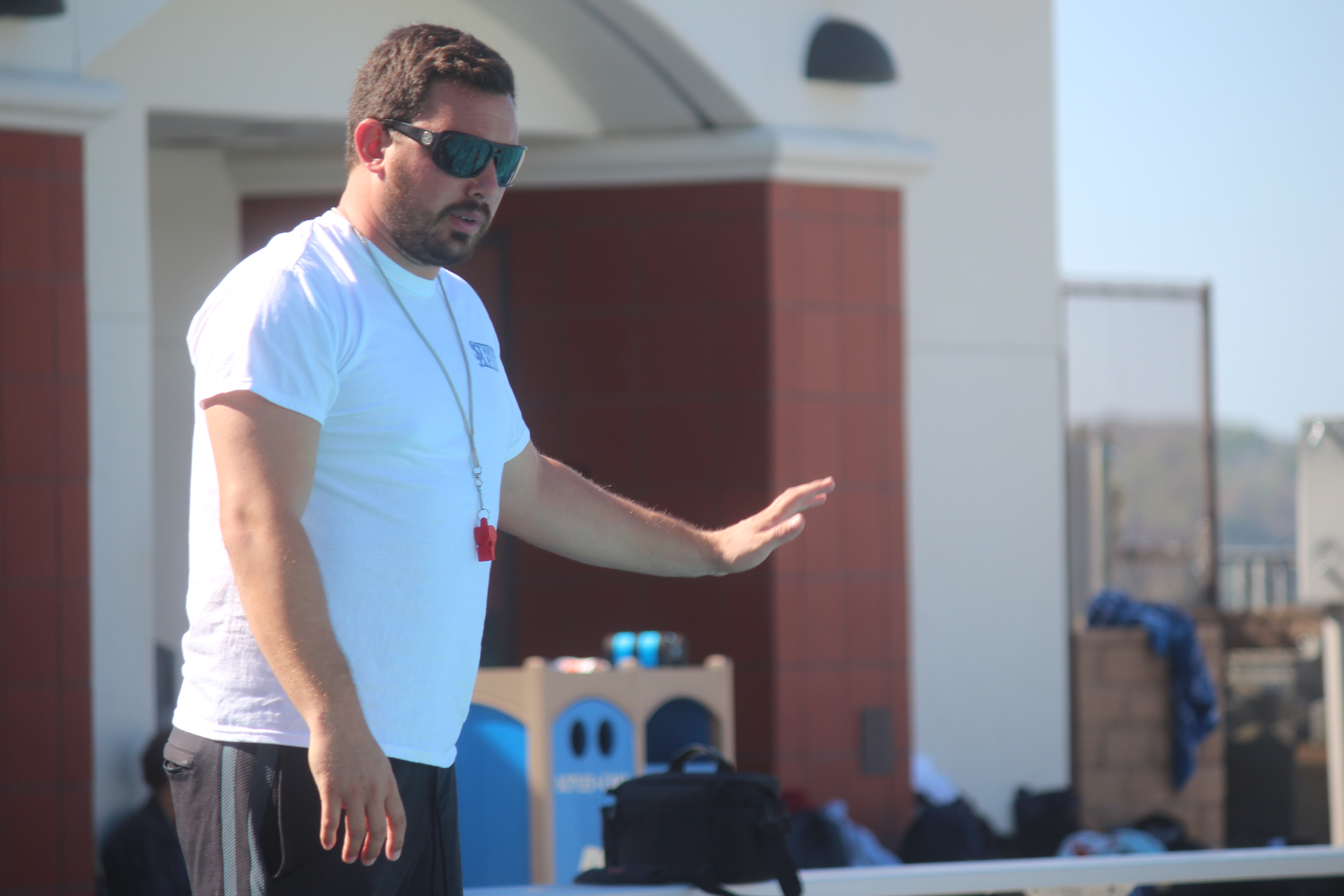 At exactly 2:58 p.m. on a hot Wednesday afternoon, a voice rings out over the pool deck at San Juan Hills High School.

His players are already standing in neat, ordered lines, ready to begin their scheduled 3 o’clock practice. At 2:59 p.m., the players are the ones doing the talking, echoing the coach’s message to one another, preparing for their warm-up. At 3 p.m. on the dot, everyone is in the pool swimming laps.

While his players swim, Buich stays busy getting the water polo balls ready and making sure things are in order. After a few minutes Buich, who is attempting to turn the little-known San Juan Hills water polo program around as a first-year head coach, utters a few words that might as well be his mission statement.

“This,” he says while pointing to the players already in the water warming up. “This is what I wanted to bring (to the program). I don’t even need to tell them to start practice anymore.”

Buich, 29, was born in Marin County but has lived a large portion of his life in Croatia, where water polo is king. His parents are both Croatian and his grandfather is a local legend in Buich’s “hometown” just outside Dubrovnik. Buich has played the sport on every level, from high school to the professional leagues and has picked up a passion and knowledge of the game that he wants to impart on the Stallions programs. Buich will also take over as the head coach of the San Juan Hills girls program this winter.

When he arrived on campus, after serving as an assistant coach at Santa Margarita the past two seasons, Buich immediately went to work instilling a sense of discipline into his players.

“I always knew there was some talent here … it just needed to be pushed a little bit,” Buich said. “I think they needed a little bit more knowledge thrown at them than what they were getting already.”

Buich wanted his team to start practice right on time, be prepared and open to accepting new styles and techniques.

During one of the Stallions first practices, Buich told everyone to get out of the pool and onto the deck to stretch. It is a training technique the coach picked up from his days playing in Croatia.

Senior two-meter specialist Kyle Knaak had never stopped to stretch mid-practice before and admits to being thrown for a loop the first time he heard it, but has embraced the new approach, as well as his new coach.

“He gets right into work. We really like the respect aspect of everything,” Knaak said. “The best thing about it is (Buich) can be really serious sometimes but he also has a really fun side.”

The Stallions are beginning to see results in the pool. Last season the team won only seven matches and has not won a league game in three years. As of Sept. 24, the Stallions were 5-7 overall, two victories away from matching last year’s win-total with 12 games remaining on their schedule.

Getting the players to buy into his system has not been difficult for Buich, he says. The team is coming together and Buich has seen stretches of good play. In the Stallions Sea View League opener against Aliso Niguel on Sept. 22, San Juan Hills hung tough for the first quarter before the fifth-ranked team in CIF-SS Div. 3 pulled away for a 16-5 victory.

“We need to just move forward and try to play every quarter like (the first against Aliso Niguel),” Buich said. “Every game we played I’ve seen different things are adding together … it is going and going.”

The focus of the Stallions and their coach is staying competitive and grabbing that elusive league victory this season. But with the fresh start that comes with every first-year head coach there is also the promise of the future.

As a longtime coach for the Orange County Water Polo Club, Buich encounters plenty of players from the southern Orange County area. He has seen the trend of players flocking to certain schools to play water polo, rather than attend one that might be closer to home. Buich is hoping this current group of Stallion players can start a similar trend of their own.

Just like out on the pool deck before the start of that Wednesday practice, Buich’s players echoed their coach’s message.

“We’re playing a lot better. We’re already a lot closer of a team,” Knaak said. “We want to go off as being the team that started to win.”