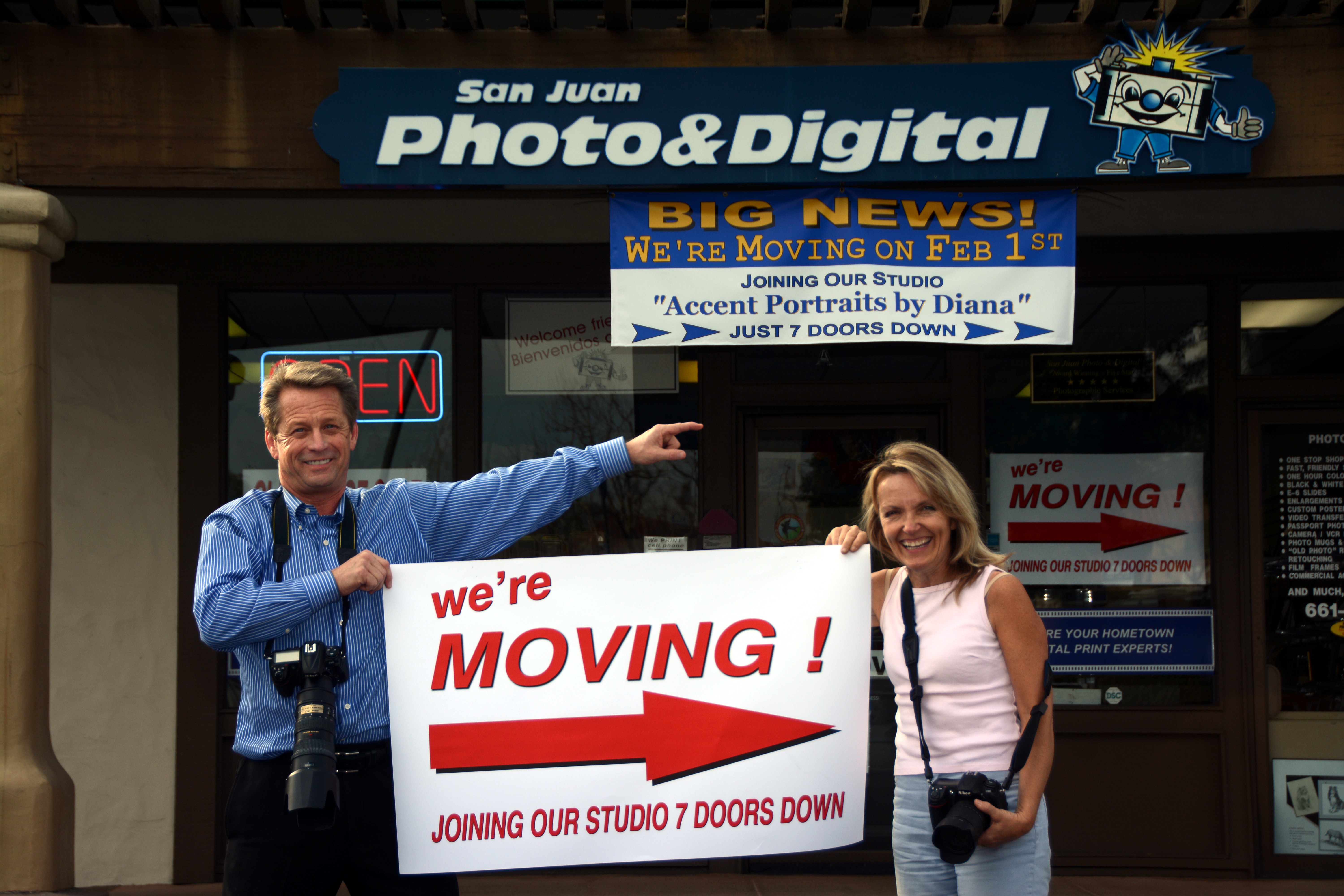 Business Beat: Photo Couple Moves In Under One Roof

San Juan’s dynamic duo of photography is moving in together.

Diana and Scott Schmitt, who can often be spotted around town taking photos for the Fiesta Association or their son’s San Juan Hills High School football games, have combined their businesses under one roof.

Starting Feb. 1, Scott and his staff at San Juan Photo & Digital will be moving seven doors down into Diana’s photography studio, Accent Portraits by Diana.

“The lab is joining forces with the studio,” Scott said. “We’ve worked closely together for 27 years, and now we’re working even closer.”

The couple bought the lab in 1989, and a year later, Diana opened her studio. In 2009, San Juan Photo & Digital received the Mayor’s Business Award, in recognition of Scott and Diana’s support for community programs and activities.

Services for both businesses will remain the same. Scott noted that more customers have been coming in to print photos off their iPhones, using the lab’s digital kiosk. Scott’s staff is also able to help customers with different smart phones. Both businesses will be open from 10 a.m. to 6 p.m.

When The Zuri Pet Spa opened four years ago, it primarily focused on grooming services with some small scale boarding. But as the boarding side of the business grew, owners and mother-and-daughter team Linda and Jenn Harris quickly realized they needed to expand.

“We needed to move into a bigger place, but we wanted to stay in San Juan because we love it here,” Linda said.

The two recently moved their business south, from a 1,400-squre-foot spot in the Marbella Plaza to a 9,000-square-foot space on Calle Perfecto.

Although the business is up and running, the finishing touches are being put together. In a couple months, Linda said the spa expects to have around 65, 5-by-7-foot overnight suites, which will be equipped with televisions and other amenities to make dogs feel like they’re at home. The extra space also allows the spa to have separate play groups for big and small dogs.

Once completed, the spa will have a Tuscan theme. Linda said the spa specializes in holistic methods to pamper pooches, including all-natural shampoos and snacks.

The Zuri Pet Spa’s business hours will be expanded as well: from 6:30 a.m. to 7 p.m. on weekdays and 8 a.m. to 6 p.m. on weekends. For overnight stays, Linda said there will always be someone on staff to care for the dogs.

Richelle, who specializes in the garden ornament aspect of the business, said the pair plan on visiting Greece, Italy and Turkey this year to source new products. The two annually visit different countries to meet with artists and vendors at bazaars, markets and street fairs.

“We don’t have the run-of-the-mill product line,” Richelle said. “We deal directly with several artists.”

Sydney, who makes many of the women’s accessories herself, said the business serves as a “one-stop shop” for many people.

“We’re an eclectic shop,” Sydney said. “It’s a little bit of everything, and there’s some sensory overload because there are so many things.”

“We came into this with no expectations,” said Fairchild, who runs the business with her husband, Randy Fisher. “We thought that if we did what we loved, people would love it too … The biggest part is all the love and support we’ve gotten throughout the year and all the people we’ve met.”

Five Vines celebrated their one-year anniversary with a special celebration on Friday, Jan. 10. Fairchild and Fisher showed their appreciation by treating guests to free food and celebrated the occasion with champagne toasts.