UPDATE: As of 7:49 p.m., Caltrans reported via Twitter that Ortega Highway is expected to remain closed in both directions between Reata Road and Shadetree Lane until midnight.

Caltrans District 12 officials reported around 3:40 p.m. that all lanes were blocked on Ortega Highway just west of Antonio Parkway after a car collided with a telephone pole.

As of 4:14 p.m., Caltrans said via Twitter that it may take up to four more hours until Ortega Highway can be reopened to traffic. Commuters can still access Ortega Highway off of Interstate 5 by taking Crown Valley Parkway to Antontio Parkway.

Orange County Sheriff’s Department Lt. Lane Lagaret clarified that it was a utility truck that hit the power pole, and the collision did not result in any injuries. 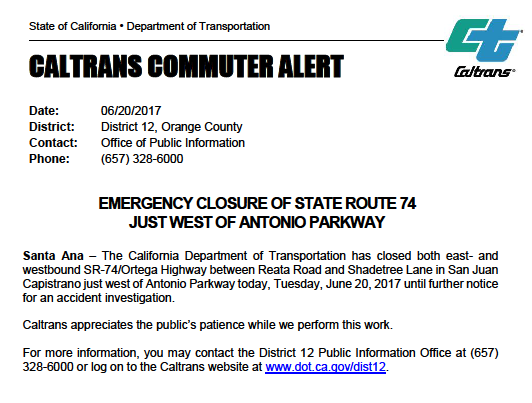