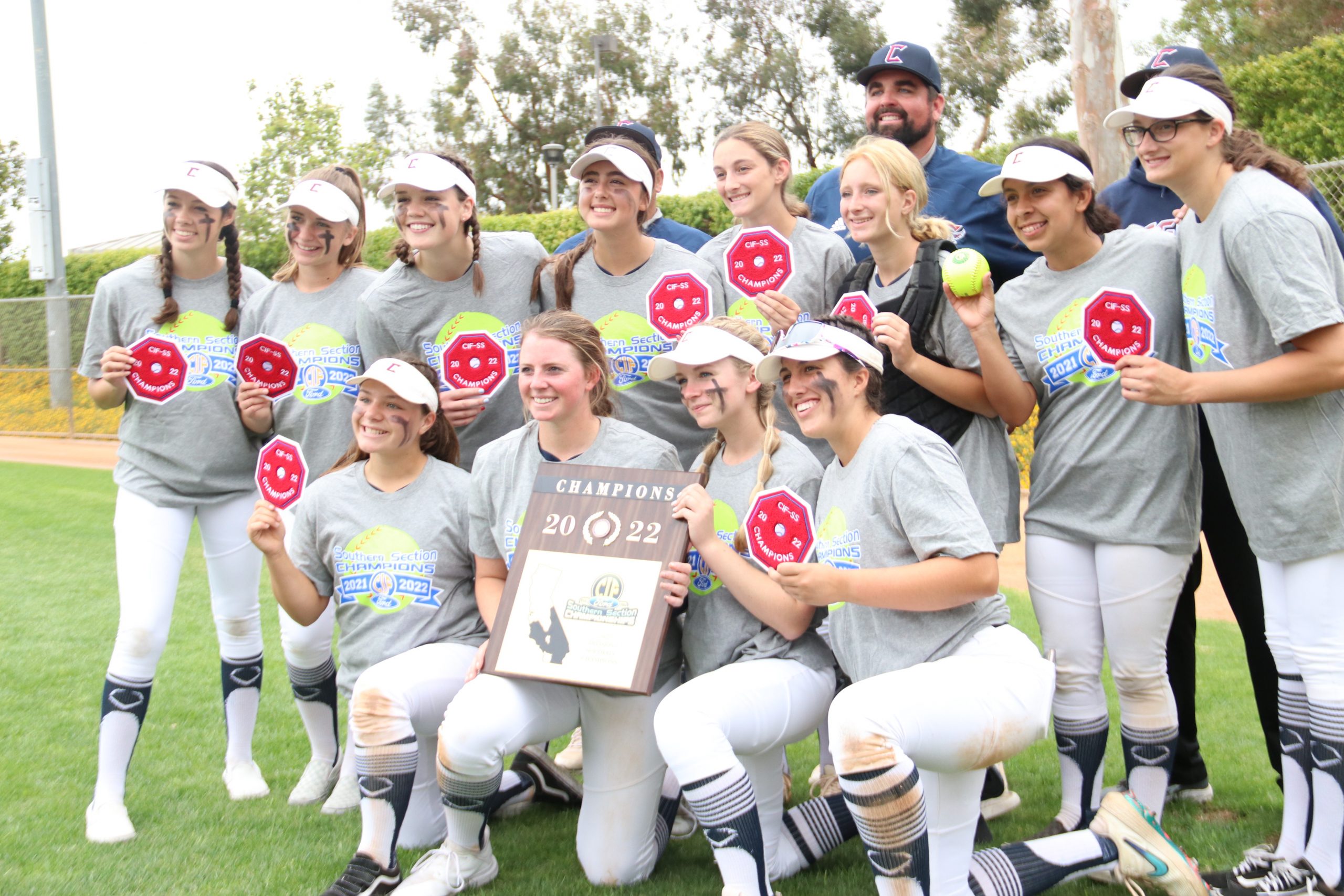 IRVINE – Capistrano Valley Christian softball’s trademark offense showed up early, but it was the Eagles’ pitching and defense that sealed away the program’s first CIF-SS championship.

Capistrano Valley Christian sprinted out to 4-0 lead after two innings, and freshman starting pitcher Kylie Cammarato got the Eagles out of jams in the third, fourth and fifth innings to defeat Linfield Christian of Temecula, 5-1, in the CIF-SS Division 7 Final on Saturday morning at Deanna Manning Stadium at Bill Barber Memorial Park in Irvine.

“I told these girls from the beginning it’s going to come down to who’s going to bring their bats,” CVC coach James Crawford said. “We’ve prevailed all year. They showed up today with the bats, we made plays on defense, and our pitching came through.”

Capistrano Valley Christian (27-1) went undefeated in San Joaquin League play and won its last 14 games to capture the first CIF-SS title in program history. The Eagles outscored opponents by a dominant margin all season, 396-62. CVC allowed just one run in each of its five playoff games, and outscored playoff opponents, 42-5.

“This team grew well over the beginning of this year,” CVC senior Natalie Gleason said, “especially having mostly freshmen on this team. It was just tremendous talent coming in, and I had a great feel about this season. They just came in and clutched up.”

CVC was playing in the program’s first CIF-SS championship game. The Eagles’ 27 wins is also the most in program history. CVC hadn’t won more than eight games since 2012, and the Eagles last won 20 games in 2010.

Capistrano Valley Christian got on the board right away on Saturday.

Freshman second baseman Savannah Maier reached base on a single and advanced on a wild pitch. Gleason, a Grand Canyon University commit, singled Maier home for the lead, 1-0.

In the second inning, the bottom of the line-up got things going for the Eagles. Senior left fielder Alexa Stewart singled with two outs, and sophomore right fielder Juliana Moore legged out an infield single. Freshman first baseman Katelynn Cammarato hit a single that scored both Stewart and Moore for a three-run lead. Cammarato scored on error for the 4-0 lead.

Linfield Christian didn’t go away quietly, but the Lions couldn’t get the big hit, as Kylie Cammarato locked in in the circle.

In the fifth inning, Linfield Christian again got to second and third but with no outs. Cammarato still shut down the threat with back-to-back strikeouts and a pop-up to second.

“I’m just trying to push as hard as a I can,” Cammarato said, “hit my spots and push until I get the batter out. Very nervous, but just focused on that pitch and try to throw it my best.”

Linfield Christian finally scored a run in the sixth inning with a lead-off single and a follow-up triple. However, the Lions were taken off the bases, as the triple was called out for running while the ball was in the circle.

In the seventh, Cammarato fielded the final out and threw to first to capture CVC’s first CIF-SS championship.

The Eagles’ season isn’t over, as CVC now qualifies for the CIF State Regional playoffs, which begin on Tuesday at higher-seeded home sites. Regional brackets will be released on Sunday.