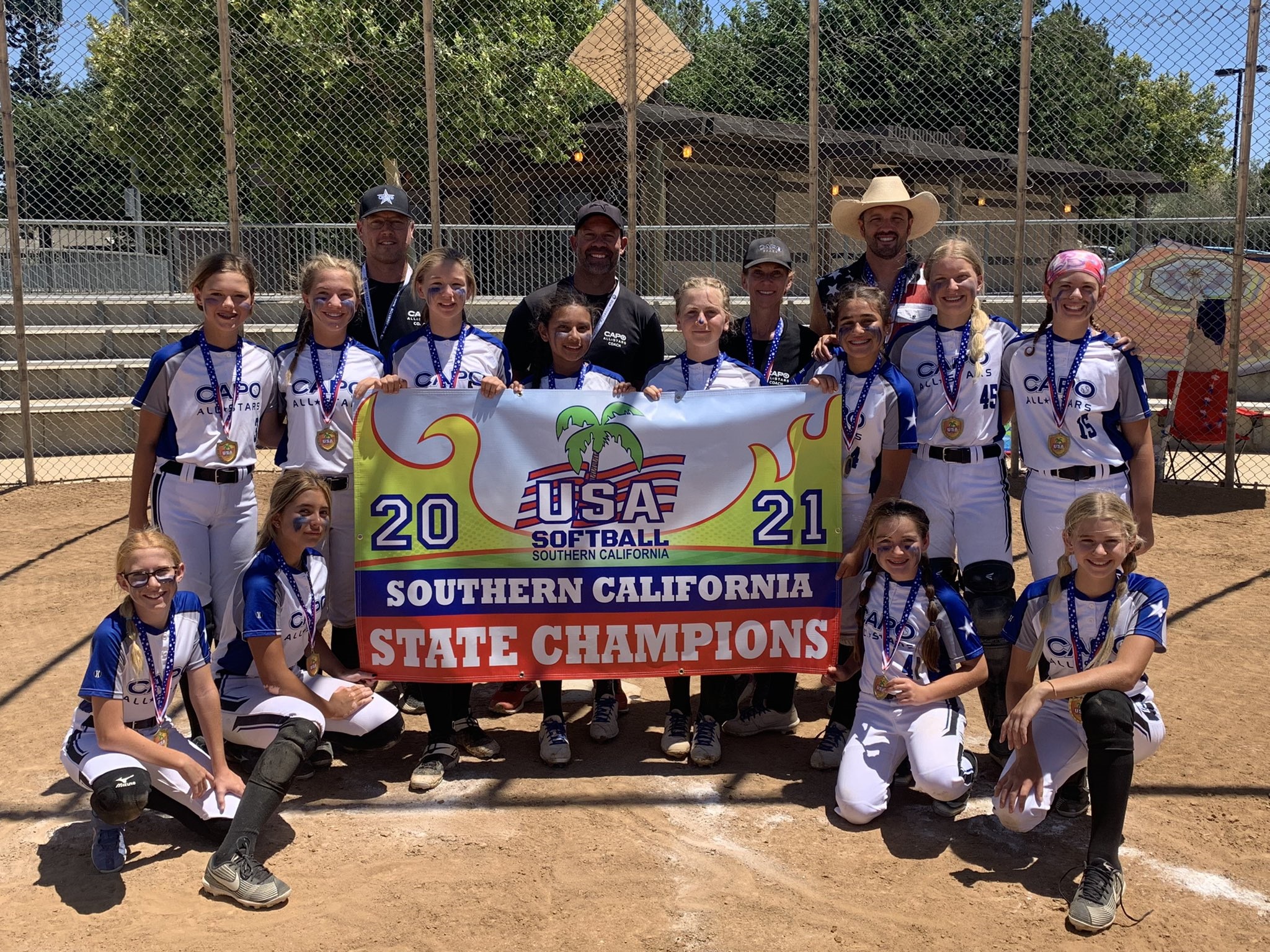 The Capo Girls Softball organization has had a stellar all-star season so far, with so much more for which  to play. Five of the Capo Girls Softball age-division all-star teams have advanced to the state level, at minimum, with the 12U Silver team already winning a state championship and the indomitable 12U Gold squad still to play at the state championships and at the Nationals.

The 12U Gold team is a staggering 37-0 over the course of the all-star season. The team is led by head coach Robert Aguilar and assistants Jeff Vallez, Al Quiming and David De Filippo.

The 12U Gold team was dominant in its run to the Central “B” District Championship on June 25 at Fountain Valley Sports Park. Capo Softball outscored its opponents by 31 runs over the course of four games. The 12U Gold team defeated Huntington Beach (13-6), Placentia-Yorba Linda (13-1) and the San Clemente Threats twice (7-4, 10-1) to win the district title.

The district championship qualified the 12U Gold team for the Southern California “B” State Championships, which begin on Friday, July 9, in Lancaster. The win also gave Capo Softball a berth in the USA Softball Western Nationals on July 21-25 in Roseville, California.

Not to be outdone, the 12U Silver team won the Southern California “C” State Championship on Sunday, July 4, in Lancaster. Capo Softball went 6-0 over the course of the state championships and outscored its opponents by a 34-run margin. The 12U Silver team beat Hart (14-1), Aliso Viejo (5-0), West Garden Grove (6-0), San Diego (4-3) and West Garden Grove a second time (9-1) for the title.

The 12U Silver team was coming off another undefeated run through the Central “C” District tournament, where Capo Softball won by a combined 24-run margin over the course of five games from June 18-20.

In lower age brackets, the Capo Softball 10U Gold, 8U Gold and 8U Silver teams all advanced to the state championships. The 8U Gold team finished second at the Central “B” District tournament.

In other sports news:

In its first USA Volleyball National Championships since 2019, the 949 Volleyball Club found the medal stand on both the boys and girls side.

The 14U Girls posted a 10-1 overall record and a 20-6 overall set record. 949 Volleyball Club won its first three matches by two-set sweeps and won its first five matches overall. The girls lost just one match in pool play, and in the gold bracket, they dropped just one set on their way to the gold medal in the 14U American Division.

The 13U boys were nearly untouched in their run through the 13 Club Division. 949 Volleyball Club won its first six matches by two-set sweeps. The boys posted three-set wins in each of their first two matches in the gold bracket, but fell in the title game by a two-set sweep to Team Rockstar.