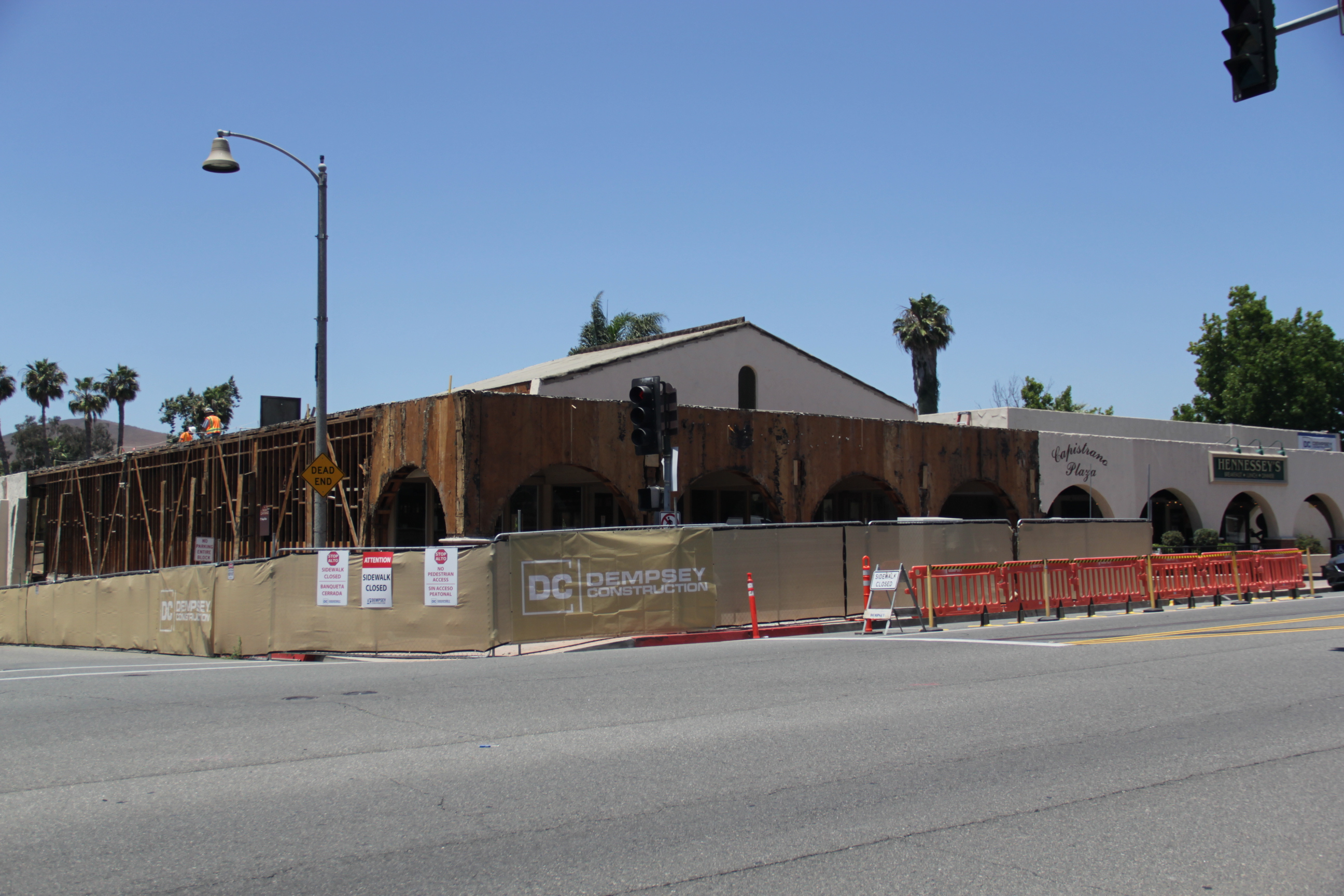 Capistrano Plaza in the city’s downtown district will soon have a new look, as renovations to update the shopping center are currently underway.

When completed, the plaza, which currently houses Five Vines Wine Bar and Hennessy’s Tavern, will have space for two additional shops to open along Verdugo Street, which is soon expected to undergo a beautification process as well.

Dan Almquist, whose firm Frontier Real Estate Investments co-owns the property along with Tony Moiso of Rancho Mission Viejo, is looking to have the renovations go hand-in-hand with the city’s plans to make Verdugo Street more pedestrian-friendly by widening the sidewalks and implementing new landscaping, paving and lighting.

“So that’s the biggest thing we’re doing is having storefronts on Verdugo to make a pedestrian-friendly environment,” Almquist said, further describing the renovations as mostly cosmetic and noting they will also include improvements to the facility’s functionality and utilities.

Part of the renovation plans is to allow for more lighting in the front of the plaza along Camino Capistrano, where the entrance of Hennessy’s sits. Currently, the face of the restaurant features low arches, but upgrades intend to remove those.

“That area in front of the building is fairly dark, the arches are fairly low, and that wall that’s adjacent to Verdugo, it’s just a big blank wall  . . . it’s really not that inviting to walk down the street,” Almquist said.

Also included in the renovations is a plan to expand Five Vines by installing a balcony to its recently created second-floor section called The Attic at Five Vines.

“Five Vines will have some changes. They’re going to add a kitchen upstairs, some minor remodeling, add additional square footage to the concept they already have in The Attic,” Almquist said.

While presenting renderings of the upgrades to the local community at a recent Coffee Chat at Hennessy’s, Almquist noted that he wanted to also address negative comments he had previously received about the building’s look.

“Everyone I talked to thought the building was ugly,” Almquist had said.

Expounding on that comment with The Capistrano Dispatch, the local developer explained that he would like the look of the plaza to be more in line with the aesthetics of the downtown corridor and Mission San Juan Capistrano.

“Our hope is that (the plaza) would be more appropriate, fitting in with downtown being across from the Mission,” Almquist said, adding, “It’s all that much more important for the city that we have a proper entrance into our downtown. So we want to do our part in again fitting in with such a historic and a really beautiful downtown for San Juan.”

During the renovations, both Hennessy’s and Five Vines are expected to remain open, according to Almquist. The upgrades are projected to be completed by the end of the year.

“We should be in a position to offer space to tenants by the end of the year,” Almquist said. “Call it the end of this year through the first part of spring in the next year.”

When both projects are all said and done, Almquist said, Verdugo Street will be a very lively environment for the downtown corridor and the Historic Los Rios District.

“Having (the plaza) be the entry into Los Rios, I think Verdugo is going to be very convivial and pedestrian-oriented,” he said.

Editor’s Note: This story has been updated to note that Almquist co-owns the plaza with Tony Moiso.