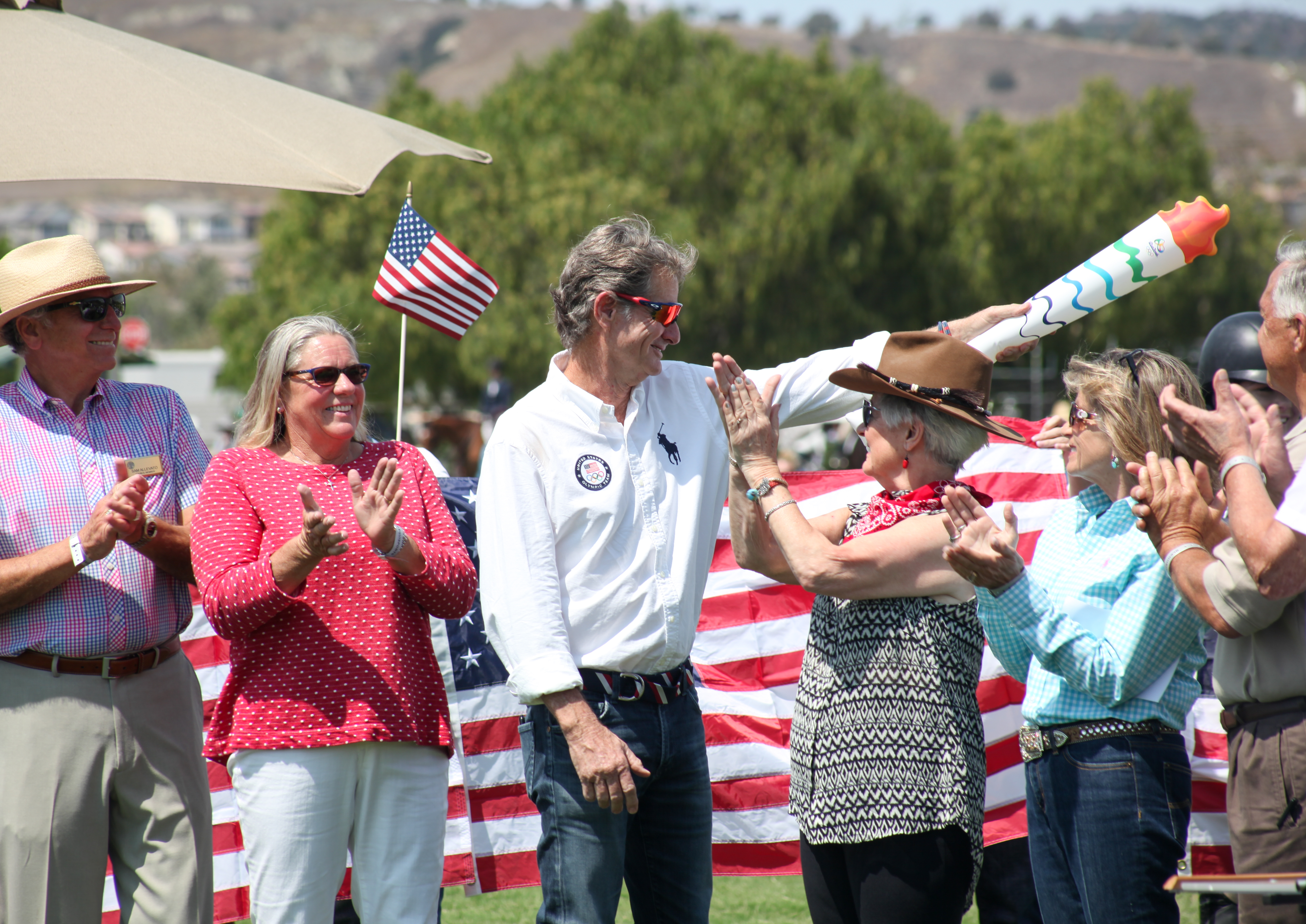 Photos and Text by Allison Jarrell

Following the conclusion of last Friday’s Olympic show jumping competition and medal ceremony in Rio de Janeiro, U.S. Olympic Show Jumping Coach Robert Ridland went straight to the airport and hopped on an overnight flight home to Irvine so that he could celebrate the U.S. team’s silver medal victory with his family and friends.

When he and his family arrived home on Saturday, they were greeted by a completely redecorated house—red, white and blue décor, complete with a large sign thanking them.

“That’s what I loved so much, because Hillary and Peyton and McKenna have been a huge part of it,” Ridland said of his wife of 18 years, son and daughter. “It’s not about me; it’s about what everybody did. It was very touching to come around the corner and see that.”

It was Facebook that tipped Ridland off to a welcome ceremony at the Rancho Mission Viejo Riding Park at San Juan Capistrano, which took place Sunday afternoon. Ridland is president of the two companies that manage the riding park—Blenheim EquiSports and Blenheim Facility Management. Hundreds of residents and visitors dressed in patriotic attire, along with city officials and Blenheim management, gathered at the riding park to honor Ridland and his family prior to that afternoon’s $30,000 Markel Insurance Grand Prix and $2,500 Interactive Mortgage U25 Developing Rider Qualifier.

The ceremony, which took place on the riding park’s Oaks International Grand Prix Field, included the singing of the National Anthem and speeches given by city officials, Blenheim staff and representatives of San Juan’s equestrian community. Ridland also addressed the crowd, thanking everyone for their continued support and sharing his thoughts on the U.S. team’s world-class performance in Rio.

Ridland’s ties to San Juan Capistrano and the riding park run deep. He was running horse show events and grand prix down in Del Mar when he was first introduced in the late 1990s to Blenheim Farms owner R.J. Brandes of San Juan Capistrano. Brandes intended to expand a field that was originally designed by Joan Irvine Smith.

“A lot of things came together at that point, and R.J. and I became partners in the company we started, which was Blenheim EquiSports,” Ridland recalled. “My company was EquiSports, his was Blenheim, so we put the two together, and that’s how it really started.”

Shortly after the creation of Blenheim EquiSports, the company pushed to host Olympic Trials at the Rancho Mission Viejo Riding Park, which became a reality in 2000 and again in 2004.

“It was a dream of mine, ever since I was a rider back in my early 20s on the international team,” Ridland said. “I’m from California, born in California, but most of our sport was on the East Coast at the time, and beyond that, most of the sport was in Europe. All of the Olympic trials had always been held on the East Coast, so it was really important that we make a big push to try to bring it to California. San Juan’s always had the equestrian tradition, so we pushed really hard to get it here, and it was the first time the Olympic trials were held west of the Mississippi River.”

The riding park continues to see its fair share of Olympic talent—riders from around the world compete in the park’s shows each year on their way to world championships and Olympic Games, including members of this year’s U.S. team.

A two-time member of the U.S. Olympic Equestrian team—as a reserve in Munich in 1972 and a competitor in Montreal in 1976—Ridland’s accolades include designing show jumping courses for international events, such as the 1992 and 1996 U.S. Olympic Trials, and has twice earned the American Horse Show Association’s Course Designer of the Year award. Four years ago, Ridland was hired as the U.S. Show Jumping coach.

Ridland said the 2016 U.S. Olympic team was comprised of some of the best professional riders in the world: McLain Ward, Lucy Davis, Kent Farrington and Beezie Madden. Ridland said the seasoned team of competitors went to Rio with confidence, but also with awareness of the sport’s high level of competition.

Ridland said the team’s strength allowed them to persevere through unexpected circumstances, such as Madden having to withdraw from competing due to an injury to her horse. The team was left without their anchor rider.

“We were trying to pull off something that had never been done before—win a medal with only three riders with no discard score where they couldn’t make any mistakes,” Ridland said.

By the time McLain was up to ride, the team knew they couldn’t get the gold, but Ridland said McLain didn’t let that affect his ride at all.

“He gave a picture perfect ride,” Ridland said. “He gave us the chance to win silver.”

It took a while before the team knew they had officially secured second place, but when they did, Ridland said they were “pretty overcome.”

“There was a whole lot of hugging, that’s for sure.”

So when does the U.S. team begin preparing for the 2020 Olympic Games in Tokyo?

“Now!” Ridland laughed. “Four years will come sooner than we think. Tokyo is in our sights, and we want to get another medal. Maybe even a different color.”