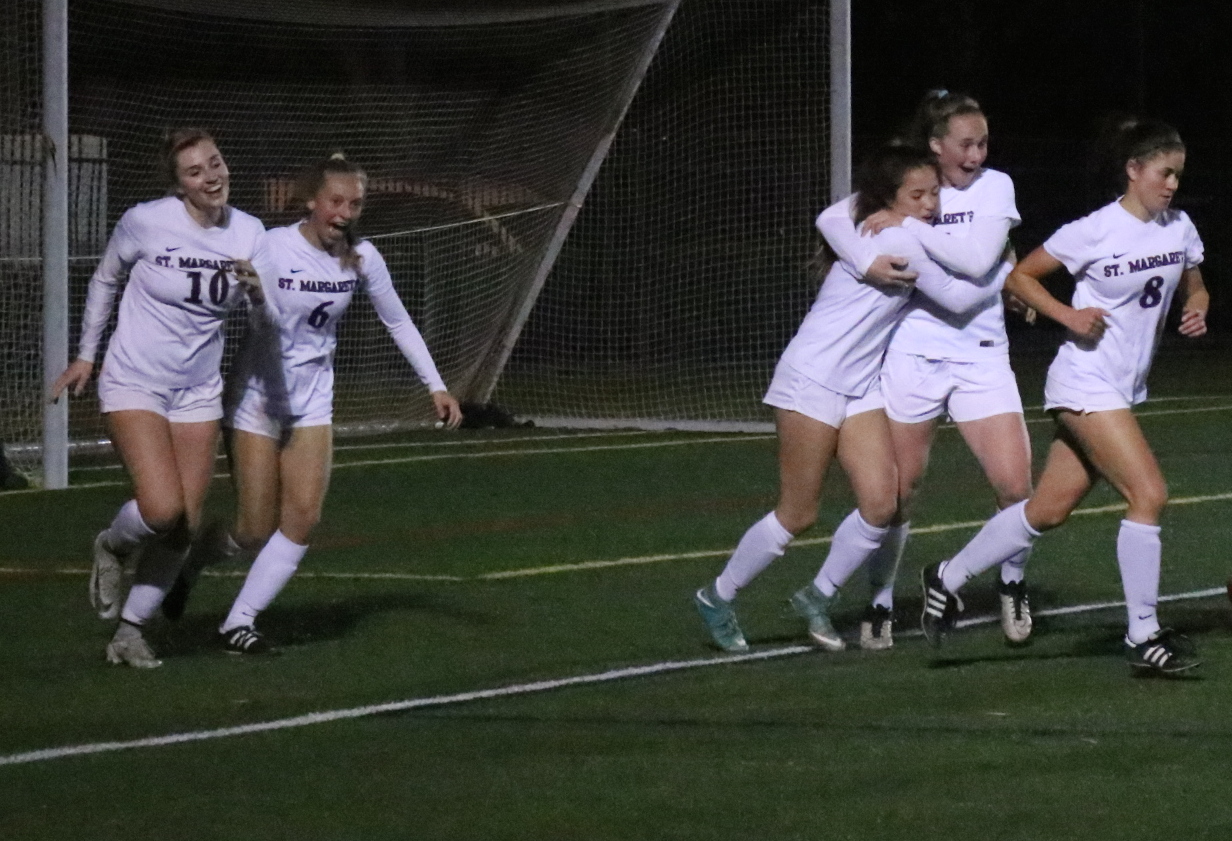 The St. Margaret’s girls soccer team continued its roll on Tuesday as freshman Bryce Chan scored a hat trick and the Tartans posted their 21st shutout of the season in a win over Walnut, 4-0, in a CIF-SS Division 4 second-round game at St. Margaret’s High.

St. Margaret’s (20-5) will travel to Montclair for the quarterfinals on Friday.

“It’s unbelievable,” Chan said. “I don’t even have words to describe how this has been.”

St. Margaret’s freshman Bryce Chan on her hat trick in the Tartans 4-0 win over Walnut in the CIF-SS Division 4 girls soccer second round. @SMESAthletics @CapoDispatch pic.twitter.com/XyF1VryczR

The Tartans got right to it.

Chan scored the opener in the second minute of the game as she converted a right-side feed from sophomore Juliet Ballard inside the nearside post.

“That was a great effort for us, in terms of playing a complete game,” St. Margaret’s coach Johnny Marmelstein said. “We had the run of play for the entire first half. (Walnut) didn’t really have a lot of chances.”

St. Margaret’s continued with its signature pressuring style to control every aspect of the game.

“They weren’t trying to make substitutions to try and put players forward to score,” Marmelstein said. “They were putting players back to deal with our speed. That’s a good thing. They don’t have fast players up front, and they’re moving them back to cover us.”

St. Margaret’s controlled the game but couldn’t extend its lead until the later stages.

The Tartans broke through in the 67th minute when senior Lauren McCaffrey blazed a cross from the left side to Ballard who converted at the far post.

In the 75th minute, Chan stripped the ball cleanly from the last Walnut defender and converted easily for her second goal.

“In the last game, she was getting into the box and passing it, and I got all over her in practice,” Marmelstein said. “Before the game, I told her the three rules I wanted her to have: score, beat someone to score, and put someone else in to score. And she took it to heart.”

In the 78th minute, McCaffrey made another left-side cross that found Chan who put home her third goal for the hat trick and the four-goal lead.

“It feels amazing,” Chan said, “but I couldn’t have done without my team, and the parents and the fans and everyone.”

With three goals by the freshman, Chan, and a goal and an assist from Ballard, a sophomore, a result like Tuesday’s spells promising things for the coming weeks and years for the Tartan program.

“We’re a young team,” Marmelstein said. “Right now, we’re only starting two seniors. I have a bunch of sophomores and juniors on this team and a couple freshmen. And we’re playing as well as we are, I think that says a lot about the kind of future we have.”