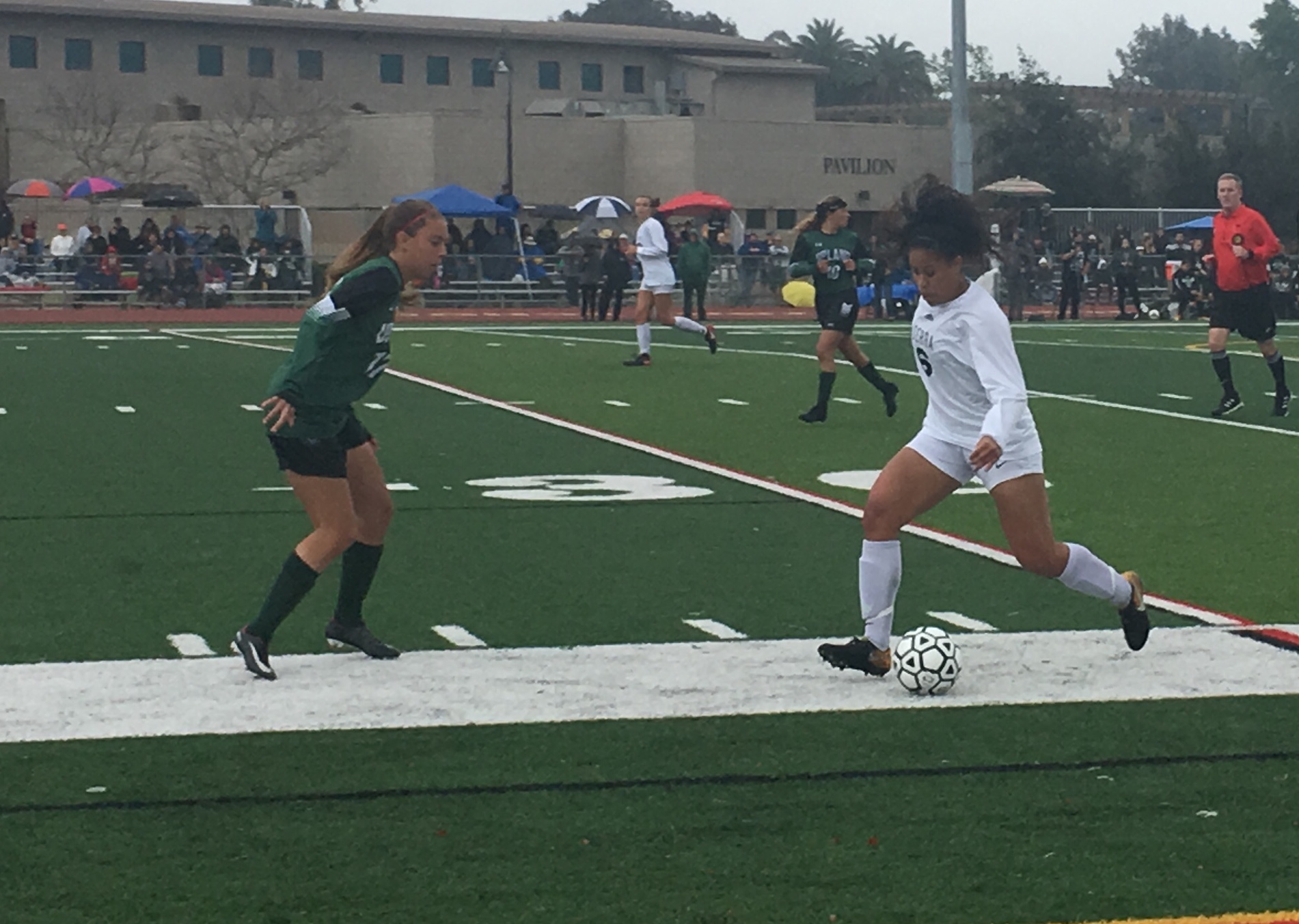 SAN JUAN CAPISTRANO – With one championship in hand, the JSerra High School girls soccer team looked to complete the repeat double, but the Lions finally ran into a better performance.

Upland scored in the opening minutes of the second half, kept up the pressure and limited JSerra’s chances to defeat the Lions, 1-0, and win the CIF Southern California Regional Division 1 Championship on Saturday at JSerra High School.

“Upland played very well,” JSerra coach Greg Baker said. “In the end, coaches can make adjustments all they want, but if one team wants it more than the other, that’s what’s going to happen.”

“They deserve it. They were hungry. The results speak for themselves.”

Ultimately, the regional tournament is the cherry on top of a great season for any team. JSerra had already clinched its No. 1

goal with a second straight CIF-SS Division 1 championship in a win over Santa Margarita, 1-0, on March 3 at Warren High School in Downey.

“If you told me we were state finalists and CIF champs, I’d take it any day of the week.” Baker said. “I don’t want to take away from (Upland’s) win, but I would rather win CIF if I had to pick one.”

On Saturday, JSerra came out with the opening push and earned a couple corner kicks, but Upland held strong and fought back.

Neither team could split the other’s back line as much of the first half was played at midfield.

On the other side of halftime, Upland pushed up the left side in the 42nd minute. The Highlanders got a shot off and scored on the far right corner to take the lead, 1-0.

JSerra played desperate for a stretch midway through the second half, but its most dangerous chances were an easily stopped shot by leading scorer Isabella D’Aquila and a ball Upland took back into its own box and eventually cleared.

The Highlanders then put the final stamp on it with a surge in the game’s final minutes to keep the ball of JSerra’s feet and nearly score a second goal.

JSerra goalkeeper Ryan Campbell made a terrific one-on-one save just before the final whistle. It was one of a handful of athletic saves by Campbell, but the offense couldn’t find the equalizer.

It was a different tune for JSerra in the CIF-SS title game.

While similarly tight defensively, it was the Lions that struck early in the second half against Santa Margarita on March 3 to collect the championship plaque.

In the 54th minute, JSerra sent on a long ball that sprung D’Aquila for a one-on-one opportunity.

“For us play it over the top with Izzy, it’s a no brainer,” Baker said on March 3. “We’re going to play that every time.”

D’Aquila chipped the ball over the Santa Margarita keeper for the difference-maker and eventual title-clincher.

“We finally got that one play that got us in behind,” D’Aquila said, “and all I had to do was finish it and I did what I had to do.”

It was the first goal JSerra had scored against Santa Margarita all season. The Eagles shutout the Lions in a 0-0 draw at JSerra and won the Trinity League title with a 1-0 win at Santa Margarita.

“Last game, they had a great defense that shut us down,” D’Aquila said. “This game we came out even harder and were able to get our couple chances and finished them how we needed to.”

JSerra also beat Santa Margarita in another nail-biter in the regional semifinals. The Lions won on penalty kicks, 1-1 (4-2).

JSerra’s CIF-SS title was the seventh in a row for a Trinity League team. JSerra beat Mater Dei on penalty kicks for the championship last season.