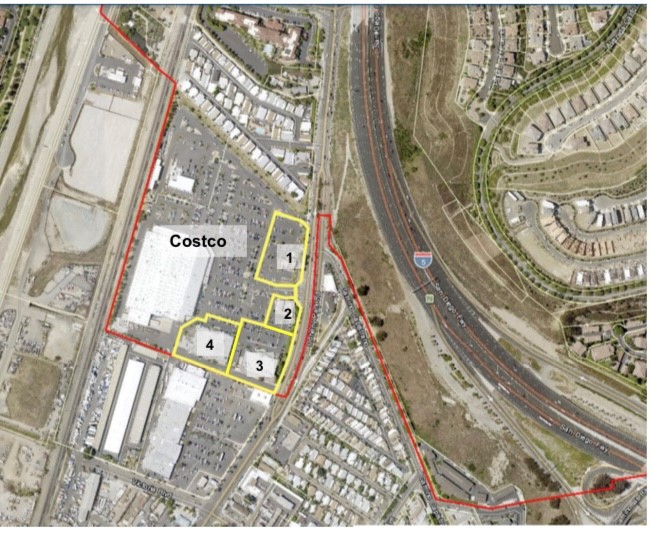 In order to meet state regulations for providing housing, the San Juan Capistrano City Council on Tuesday, Sept. 21, signed off on a General Plan and code amendment study that allows high-density housing developments on four parcels of Doheny Park Road.

The parcels are currently commercial areas and located at 33953, 33955, 33959, and 33963 Doheny Park Road. Existing businesses at those parcels include Costco and Staples. The amendment permits up to 50 dwelling units per acre.

The City of San Juan Capistrano is working through satisfying housing requirement regulations issued by the state, and has previously approved studying proposed rezoning that allows high-density residential units in other parts of town. City staff identified the Doheny Park parcels—which are near the Dana Point border—after previous similar plans in the Avenida Los Amigos area were voted down following residential outcry from residents in that neighborhood.

“The developer could maintain the current commercial uses, could tear down the commercial uses and add residential in their place, or actually have a use of both,” Joel Rojas, development services director for the city, said of what the code amendment means.

City Manager Ben Siegel said city staff explored the concept of mixed use with consultants, who recommended adding in permitted residential use to the Price Club Specific Plan, so the free market and developers can determine exact uses.

Rojas said cities can incur penalties if they do not go along with state housing requirement laws.

“The state can cut off funding for capital improvement projects,” Rojas said. “Not having a certified housing element exposes a city to litigation—not just from the state, but also from affordable housing advocacy groups.”

Councilmembers have previously spoken against state regulations and local municipalities not having more say in housing decisions—a point reiterated Tuesday by Reeve, who said it was hard to disagree with Farias.

“The challenge is the last one we had—I felt Avenida Los Amigos made the most sense logically. Obviously, none of the residents agreed, so I lost that,” Reeve said. “There are other locations that we can explore, but that would be simply disastrous—certainly for my constituents, as well as for some of yours. This is not something I’m breaking out the pom-poms for, but it’s trying to make the best of a bad situation.”

City staff planned to submit their draft housing element to the state the day after the council meeting, and plans to come back before the council to adopt a new housing element in February—the deadline for which the city has to update the element and get state approval on the framework for doing so.

Updates to a municipality’s General Plan—which the housing element is a part of—are required every eight years, under state law.