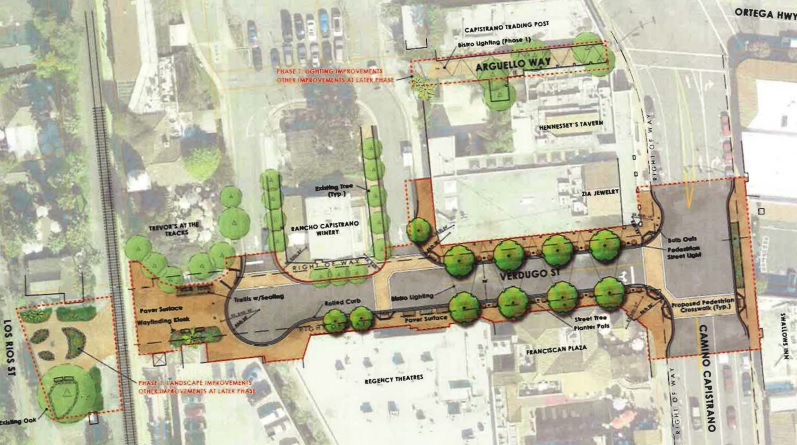 Construction to remodel Verdugo Street in the city’s downtown corridor could get started as early as this fall as the city council on Tuesday, July 16, approved plans authorizing staff to accept bids from potential contractors.

The council voted 4-0-1, with Councilmember John Taylor recused, to approve the Verdugo Street Beautification Project’s plans and specifications and to open up the request for proposals process for contractors to bid on the capital improvement project.

At the outset of the discussion over the project Tuesday night, Taylor recused himself, citing a new Fair and Political Practices Commission rule that requires elected officials who live within 500 to 1,000 feet of a proposed project to refrain from being included in such considerations as there’s a potential for financial impact.

From Camino Capistrano to near the end of the cul-de-sac, Verdugo would narrow from 40 feet to 28 feet while the width of the south-side sidewalk widens from 6 feet to 11 feet and the north-side curb extends from about 5.5 feet to nearly 12.5 feet.

Currently, the city has nearly $1.53 million budgeted toward the construction of the project, which has an estimated price tag of more than $1.88 million. The city notes the precise cost of the project won’t be clear until it receives the contractors’ proposals.

To make up the anticipated $357,000 shortfall, the city said it will ask the council to approve a transfer of $45,000 from the Citywide Sign Replacement Program and appropriate $312,000 from the Systems Development Tax Fund when it comes time to award the construction contract.

The Sign Replacement Program is another capital improvement project to replace the city’s signs that meet federal guidelines on reflectivity. The Development Tax Fund is made up of proceeds the city collects from development projects to offset the impacts of new development, according to the city.

The city is looking to also install a four-faced clock that the Rotary Club of San Juan Capistrano will donate to enhance the plaza area of the project. The initial estimated cost of the clock was $37,000. However, Tom Hoon, who represented the Rotary Club during Tuesday’s meeting, said the group is going to purchase the clock for far less than that initial quote.

Touching on some of the new planned sidewalk appliances, specifically the size and volume of the planters and pots for the trees, Mayor Pro Tem Troy Bourne asked city staff whether that would effectively reduce the amount of sidewalk space for pedestrians and defeat the purpose of widening them.

“Are we forcing pedestrians back into narrower corridors? … Are we effectively narrowing the sidewalks that we’re widening by putting these large planters there?” Bourne asked.

City Engineer Joe Parco noted that the south-side sidewalk is already constrained by the inclusion of existing trees.

“I think that the features are separated enough so that the pinch points will allow pedestrian travel east and west,” Parco said.

Richard Fisher of Richard Fisher Associates, which put together the design concept for the project, also responded to Bourne’s question, stating that he and his team believe there will be a “moderate amount of additional pedestrian space, even with the pot platforms and street trees”.

Fisher added that such elements along the street will also be necessary for pedestrians to feel safe walking on the sidewalk.

Eric Altman, the owner of Rancho Capistrano Winery in the downtown district, spoke in favor of the project, encouraging the council to approve the plans and move forward with it. One thing the council should consider, Altman said, is the increase in property values that would generate income for the city.

“The economic value the city will recoup over the long-term will easily pay for these improvements,” Altman said.

While not objecting to the project as a whole, local resident Kathy Hobstetter echoed Bourne’s concerns about having too many planters and pots on the sidewalk, calling them horrendous.

“But those pots, it seems to me, take up an awful lot of extra room,” Hobstetter said, adding: “I personally really object to that footprint with those pots … those are big pots, those aren’t little pots. That’s an awful lot of pedestrian room taken up.”

If the city awards a contract by early September, the contractor could potentially break ground later that month, according to the city. If all goes according to plan, the project could be completed by March 2020.

Parco further explained that construction of the project would be done in phases to minimize impacts to the downtown business community. In doing so, he added, patrons and delivery trucks would still be able to access such businesses throughout the duration of construction.