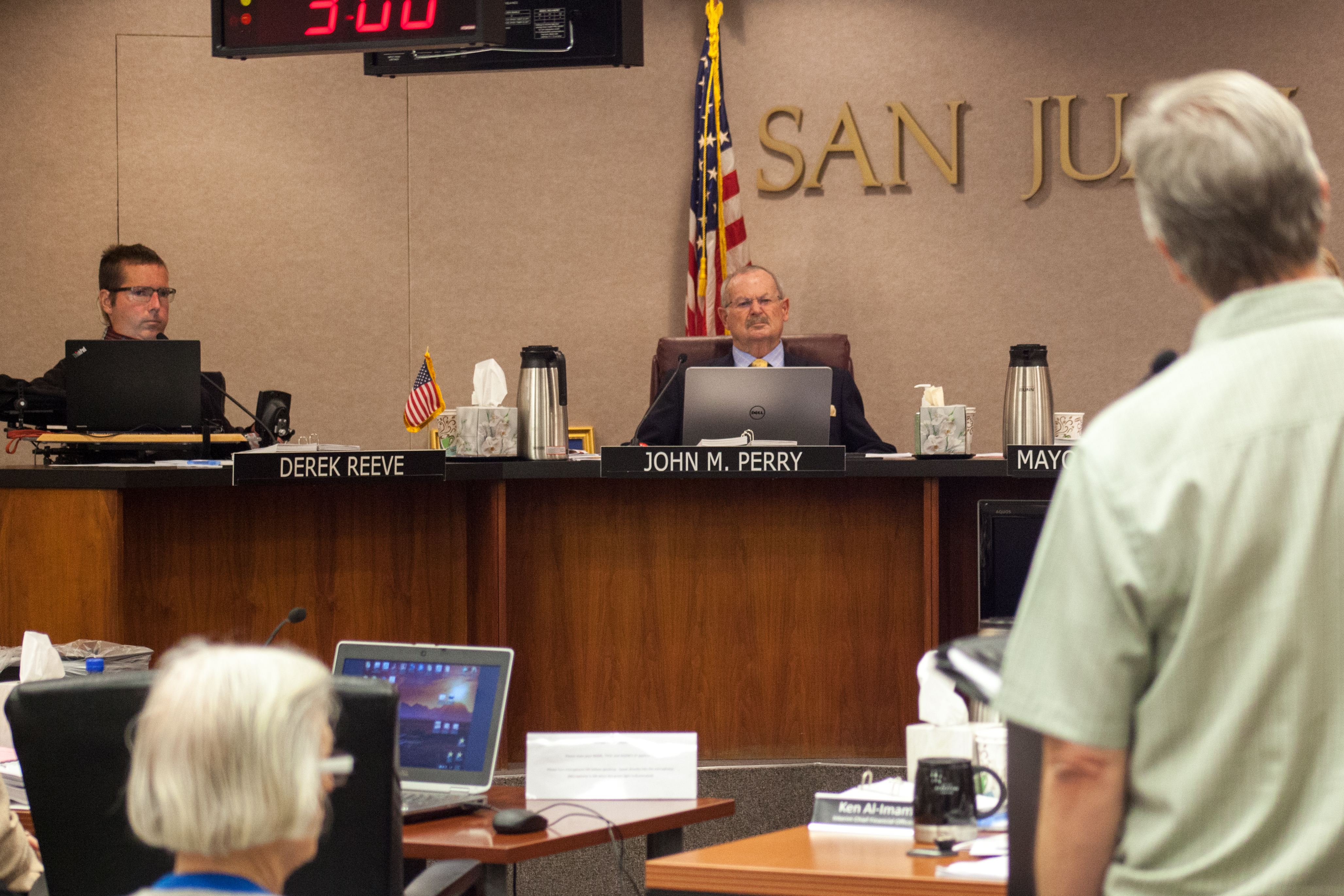 Despite Councilman Derek Reeve’s concerns over the “appearance of conflict,” the majority of the San Juan Capistrano City Council voted against Reeve’s request to remove architect Rob Williams from his post as Planning Commissioner on May 3.

In a 3-2 vote—Sam Allevato and Reeve dissenting—the Council voted to table the discussion until a Fair Political Practices Commission investigation of Williams is closed. At that time, Councilwoman Kerry Ferguson proposed they can revisit the subject if they feel it’s necessary.

But Reeve said that the closure of the FPPC’s investigation won’t resolve his concerns that Williams’ continued review of the city’s Historic Town Center Master Plan and the Hotel Capistrano by Kimpton creates “the appearance of conflict.” Before the final vote, Reeve offered a substitute motion to have Williams remain on the commission and recuse himself from any matter regarding the HTC and Kimpton hotel, but it only drew support from Allevato.

In Reeve’s initial agenda report, he asked the Council to consider removing Williams due to his unwillingness to recuse himself from reviewing the city’s Historic Town Center Master Plan and the Hotel Capistrano by Kimpton.

“The update of the Historic Town Center Master Plan (HTC) and the two proposed hotel projects, Inn at the Mission San Juan Capistrano and Hotel Capistrano by Kimpton, are priority issues facing San Juan Capistrano,” Reeve said. “It is critically important that these vital projects be reviewed in a process that is above reproach or allegation of bias.”

The allegation of bias to which Reeve refers is centered around Williams’ personal and fiduciary relationship to landowner and developer Bill Griffith—who owns the local Rivendell Land Company—and Rivendell consultant Dan Friess. Williams was subcontracted by Friess for architectural work on two buildings that are now owned by Rivendell: the Egan House and the clock tower.

On Dec. 11, 2015, the City Council voted to exclude Williams from reviewing any issues within the Historic Town Center Master Plan related to the Egan House and Esslinger property, which is also owned by Griffith and is separated from the Egan House property by a plot of land owned by Steve Oedekerk, where the Hotel Capistrano by Kimpton is planned. Griffith is currently moving forward with his own hotel project across from the Mission, known as Inn at the Mission San Juan Capistrano, which Williams has recused himself from reviewing.

Reeve said Williams “rightfully recused himself” from participating in Inn at the Mission discussions “due to his personal and financial relationships with the proponents” of that hotel and to “avoid any appearance of impropriety.”

“Despite these appropriate actions, the continued review by Mr. Williams of the HTC as a whole and the Hotel Capistrano by Kimpton hotel project continue to create the appearance of conflict,” Reeve said. “This appearance of conflict results from allegations of financial conflict, Mr. Williams’ alleged actions related to his opposition to the previous hotel project on the same site as the current Hotel Capistrano by Kimpton proposal, his personal relationship with the proponents of the Inn at the Mission San Juan Capistrano project and other concerns of potential conflict or bias for or against the projects and their proponents.”

During the meeting, Reeve further noted the relationship connecting the two hotels, saying that “the simple reality in business is if you can have the only taco stand in town, that’s what you want.”

“If you can be the only hotel, there’s a motivation there,” Reeve said. “I’m not saying there’s any actual impropriety, but the appearance is blatant. It’s obvious. Not one of us would hesitate to recuse ourselves.”

In a recent interview, Williams dismissed Reeve’s analogy, saying that the hotels are different enough that visitors will come to stay at the Marriott or Kimpton specifically. He added that the “Marriott would never build a hotel if they felt they would lose money on it.”

“Both of those hotels are going to be successful if they’re built successfully,” Williams said.

Williams is also a member of the Save Our Historic Town Center (SOHTC) group—along with Mark Nielsen and Ken Friess—which is currently in the midst of suing the city and landowner Steve Oedekerk. Allevato brought up the lawsuit at the May 3 meeting, adding that the city had received a letter from the SOHTC group on April 19 threatening litigation over the Kimpton’s CEQA review.

“… there is an active lawsuit now involving SOHTC group, which is suing Mr. Oedekerk personally, and Rob Williams is a member of that organization,” Allevato said. “… He is suing someone and then reviewing that person’s project. I don’t think you can be unbiased and fair.”

Williams responded that he was not involved with the letter, that it was written solely by Mark Nielsen, and that he had not been made aware of it before it was sent. In an interview, Williams claimed that he has not been recently active in the group.

Williams was also named in a “threatened litigation” item in the Council’s closed session earlier that day. According to a memorandum from City Manager Ben Siegel regarding the item, the item was listed in closed session because he felt Williams “intended to initiate litigation against the city related to Councilmember Reeve’s May 3 agenda item.”

In the memo, Siegel wrote that he had alerted Williams of Reeve’s agenda item on Friday, April 22, and told Williams that “if he would recuse himself from matters related to HTCMP and the Kimpton Hotel Project, Councilmember Reeve would not bring a Council agenda item and, in fact, would publicly commend him.

“Commissioner Williams responded by stating, unequivocally, that he has no intention of stepping down, that he ‘has made a living of not backing down,’ that ‘you don’t know what you’re getting into,’ that ‘things would get ugly,’ Siegel wrote. “He further stated that the City Council would need to remove him from the Planning Commission before he would recuse himself.”

During the Council’s discussion in open session, Ferguson questioned whether Reeve had evidence that there was a transfer of funds between Griffith and Williams. Reeve replied that the dais “isn’t a courtroom” and he had not subpoenaed Williams’ bank account.

Later on, Ferguson replied to Reeve saying, “People are innocent until proven guilty.”

Reeve said that because Williams refuses to recuse himself from reviewing the HTC and Hotel Capistrano, “the integrity of the review of these projects will be called into question and expose the city to legal challenge no matter what the ultimate decision is.”

Reeve’s request to remove Williams from the Planning Commission came amid an ongoing Fair Political Practices Commission (FPPC) investigation into Williams. In February, the FPPC sent a letter to Williams alerting him that he was to be fined $400 for failing to report income from his company, Studio 6 Architects, on his Statements of Economic Interest (Form 700).

During the FPPC’s hearing on April 21, the item regarding Williams’ enforcement agreement was pulled from the commission’s consent calendar due to a new complaint received from Oedekerk, which details financial connections between Griffith, Friess and Williams.

FPPC Communications Director Jay Wierenga confirmed that the “investigation is open and ongoing” and “a case is not closed until the full commission votes on the outcome proposed by FPPC Enforcement.”