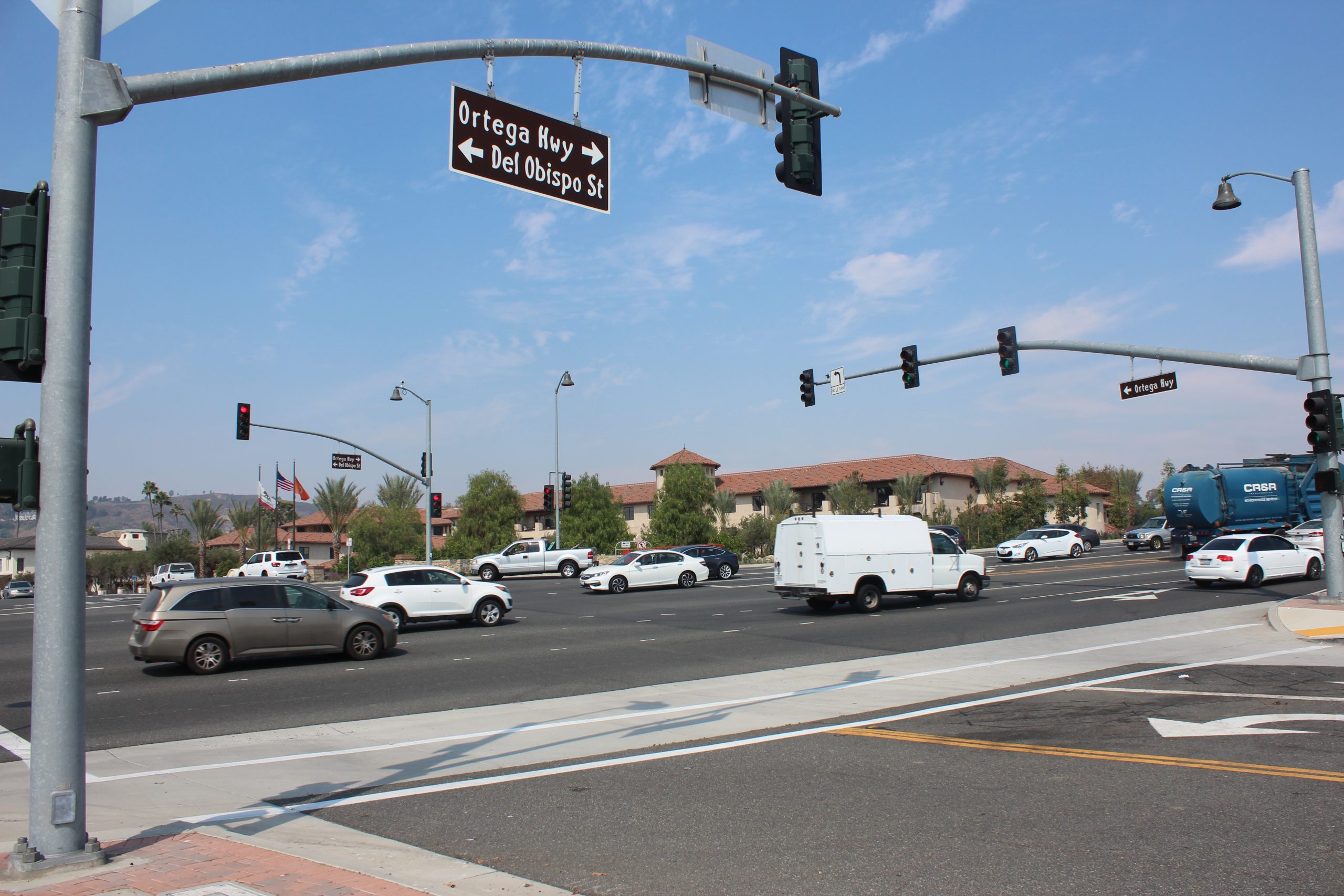 The intersection of Ortega Highway and Del Obispo Street should be getting spruced up in the coming months, through a gateway landscaping project under the direction of city officials.

During a meeting on Tuesday, March 2, the San Juan Capistrano City Council authorized awarding a construction contract to Brightview Landscape Development, Inc. for aesthetic enhancements at the intersection to match the landscaping and architecture at Inn at the Mission San Juan Capistrano, the new boutique hotel in the area. The intersection is considered a key entry point for downtown from the I-5.

Specifically, landscaping work would be for the city-owned southwest corner and a privately-owned northeast corner at the intersection. The city-owned parcel is near Camino Real Playhouse, while the northeast corner is by vacant property and a Del Taco location. Renovations will include low stone masonry walls, new plants and irrigation and drainage enhancements.

A median with olive trees is also expected to be constructed in the area as part of the project.

“The project was advertised on January 7, 2021. Bids were opened on February 4. Four bids were received,” City Engineer Joe Parco said during a presentation to the council. “Three of four were very consistent estimates, within 10% of each other. The low bidder was Brightview Landscape Development, Inc.”

Cost bids were higher than expected due to lighting system, labor, and material costs, Parco said.

After Councilmember Troy Bourne asked who would handle ongoing maintenance following the enhancement construction, city staff said that inventory would be maintained by the city’s maintenance contractor and that the construction contract has a one-year warranty period.

Bourne said that specific matter can be revisited, given it’s “atypical maintenance,” and so the intersection will continue looking “special.” City Manager Ben Siegel agreed with those assessments.

“Ben, it would be possible for you to administratively—in the future—if landscaping maybe wasn’t up to par with the neighbors, to just administratively increase the maintenance in that area,” Councilmember Sergio Farias said. “Is that possible, and is that also possible in other areas like Verdugo Street, where we made similar improvements? … I mean, you could do it, instead of bringing it back to the council. I think the point my colleague is trying to make is there’s some concern with approving these projects and then maybe them not looking like the renderings.”

Siegel said augmented maintenance can be looked at, and either approved administratively or brought to the council for a minor amendment if it exceeds his threshold.

Construction is expected to start in April and finish in June. The council authorized funding the project in March 2020.

“A major contributor to that result, and a huge benefit to the city on a go-forward basis, is the action that the city council took last June to reduce the recurring annual personnel expenditures of the city by $1 million,” Al-Imam said.

A $254,000 increase in development-related revenues and reduced litigation expenses have also reportedly contributed to the amount of reserve funds, which has increased over the past three years.

“The current level of general fund reserves is an important and necessary hedge against the considerable uncertainty that surrounds the COVID-19 timeline and its related economic impacts,” Al-Imam said.

The city’s sales-tax revenue took a $800,000 hit for fiscal year 2019-20, though there is now a “more rapid recovery” than was originally projected, he said.

“Most of this rapid return to near-normal levels of sales-tax revenue is concentrated in general consumer retail, automobile sales, and internet sales,” Al-Imam said.

Staff is currently working on the 2021-22 fiscal budget, and plans to bring the budget and recommendations for an updated general fund reserve policy to the council in June.

Though city budgets have generally been for two years in the past, the 2020-21 and 2021-22 budgets are for one year each due to uncertainty related to the coronavirus health crisis.