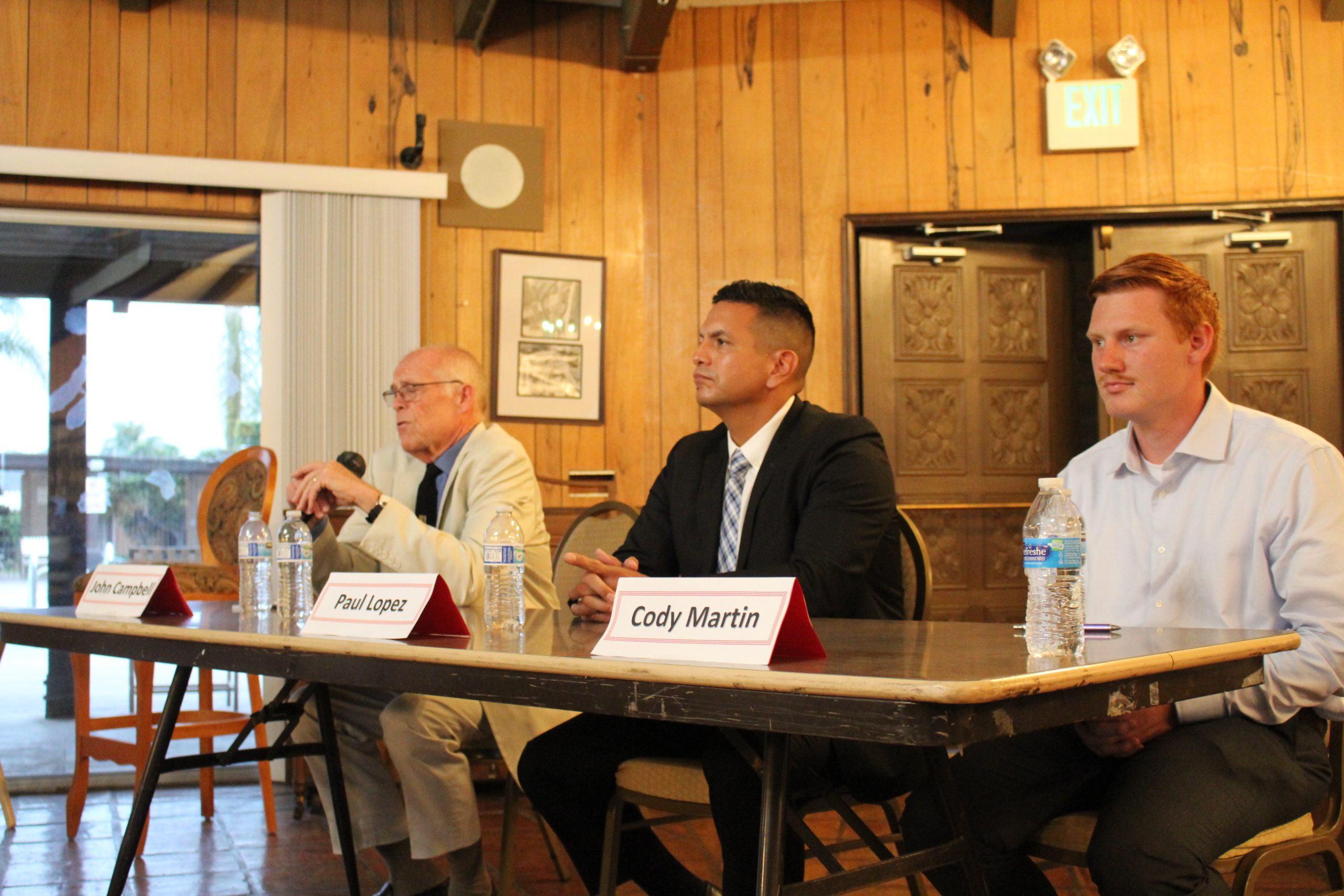 The three candidates for the District 3 seat on the San Juan Capistrano City Council gave their takes on electric bikes, proposed redevelopment of the Camino Real Playhouse and other local topics during an election forum held at the Capistrano Valley Mobile Estates Clubhouse on Oct. 6.

Paul Lopez, Cody Martin and John Campbell are running for the seat currently held by Mayor Derek Reeve, who is not campaigning for the position again and has instead thrown his hat in the South Orange County Community College District Trustee Area 4 election.

Asked about electric bikes, Campbell said they have become a “bit of a nuisance, especially with younger riders.”

“I think we need to follow the (Capistrano Unified School District) and try to come up with ways to have kids go through a safety program, so that they can understand more about the responsibilities of having a bike,” Campbell said. “When I was growing up, there were bike licenses. It’s important to not burden our city any further with ridiculous enforcements of different laws, but we need to look around and think out of the box, because this is a brand new challenge for us.”

Lopez also pointed to CUSD’s recently passed “Safe Routes to School” program that calls for school site-specific policies to be implemented regarding e-bike use on campuses.

“Right now, as a city, we’re in more of an education-based situation of informing people what to do with e-bikes, e-bike safety, what you can and can’t do—but we need more,” Lopez said. “One, for starters, I’d like to see more speed limits posted on trails. In addition, I think we need to do more than simply educate. Particularly for riders under 18—because I think a lot of our issues with e-bike readers are with riders under 18—we need to create fines.”

One issue Lopez mentioned is two people riding on an e-bike, which is not allowed. Violators can go to a class and have a parent sign off on it to have their fine waived, Lopez said.

Martin, who is on the San Juan Capistrano Parks, Equestrian and Community Services Commission, said they have dealt with the issue and heard a presentation on it from the Orange County Sheriff’s Department.

“The truth is, the vast majority of e-bike users use them safely and responsibly. We have e-bikes in my family,” Martin said. “The problem is, there’s a not insignificant minority of e-bike users that abuse the process. … Most e-bikes can’t exceed 25 miles an hour, give or take, and most parents understand that. The issue is the internet. On YouTube and online and whatnot, young kids can learn how to modify their e-bike to go faster than 25. This is the problem.”

Local schools need to educate students about how to properly use e-bikes and a fine could also be implemented in San Juan for infractions, including speeding and not wearing helmets, Martin said.

The candidates also addressed plans by developer Dan Almquist to build a parking structure and office and retail space at the current Camino Real Playhouse property, which would require the razing of the current Playhouse site.

“This goes back to responsible development. I want to make sure that any development that comes into the city is responsible and preserves the character of our city,” Lopez said.

Martin said he is glad to see there will be more parking available downtown.

“It’s such a pain in the rear when you’re trying to go have a meal with your family or visit the Mission or go shopping downtown, and you can’t find somewhere to park,” Martin said. “I tell you what, we are losing something really special in the Playhouse, and we need to get working on that as soon as possible. It’s nice to have performing arts here in town. It’s not something we want to lose. I think it adds to our historic charm. It complements the Mission and Los Rios Street well.”

Campbell is the treasurer and a board member for the Playhouse and has been involved with the redevelopment process since the city reached a negotiation agreement with Almquist years ago.

“It’s a very challenging situation, and I think it’s important for everyone to understand how that worked. That property was owned by the state of California and was given to the city 30 years ago as a part of redevelopment,” Campbell said. “What happened through that process is the state went back and, over the years, have called back the ticket on that. First, they said no more redevelopment funds are available. Then they came back to the city and said, we want you to sell that property, and we’re demanding you sell it by a certain date.”

Campbell said project plans, which have floated the idea of a new performing arts center but did not include that in the specific proposal recently taken up by the City Council, changed over time. Nobody wants apartment buildings in “the shadow” of Mission San Juan Capistrano, which was a possibility if the city did not approve Almquist’s plans, Campbell said.

The candidates also spoke on various other topics, including traffic.

Lopez also said he would like to see proposed development plans promote pedestrian traffic through the addition of more sidewalks.

Martin said he would like to ensure the city has a balanced budget and is fiscally responsible. The city currently has a fiscal surplus, partly attributed to reduced legal expenses and a lean number of staff members.

“I’d like to fully fund our law enforcement and give them the tools they need to deal with the homelessness issue. That includes more funding, particularly for police officers to deal specifically with the homelessness issue. We already have a couple of deputies who are focused on that,” Martin said. “Finally, I’d like to protect our open space here in town as much as possible. There’s a lot of development going on in the open space, and I’d like to make sure we’re protecting that not just for our equestrian community, but just also your average Jane and Joe.”

“The sheriff has done a pretty darn good job so far doing that. Our crime is down, but there’s still some situations that concern me. Homelessness,” Campbell said. “The Sheriff’s Department did a great job getting the hillside cleared up. That was a big problem in your community.”