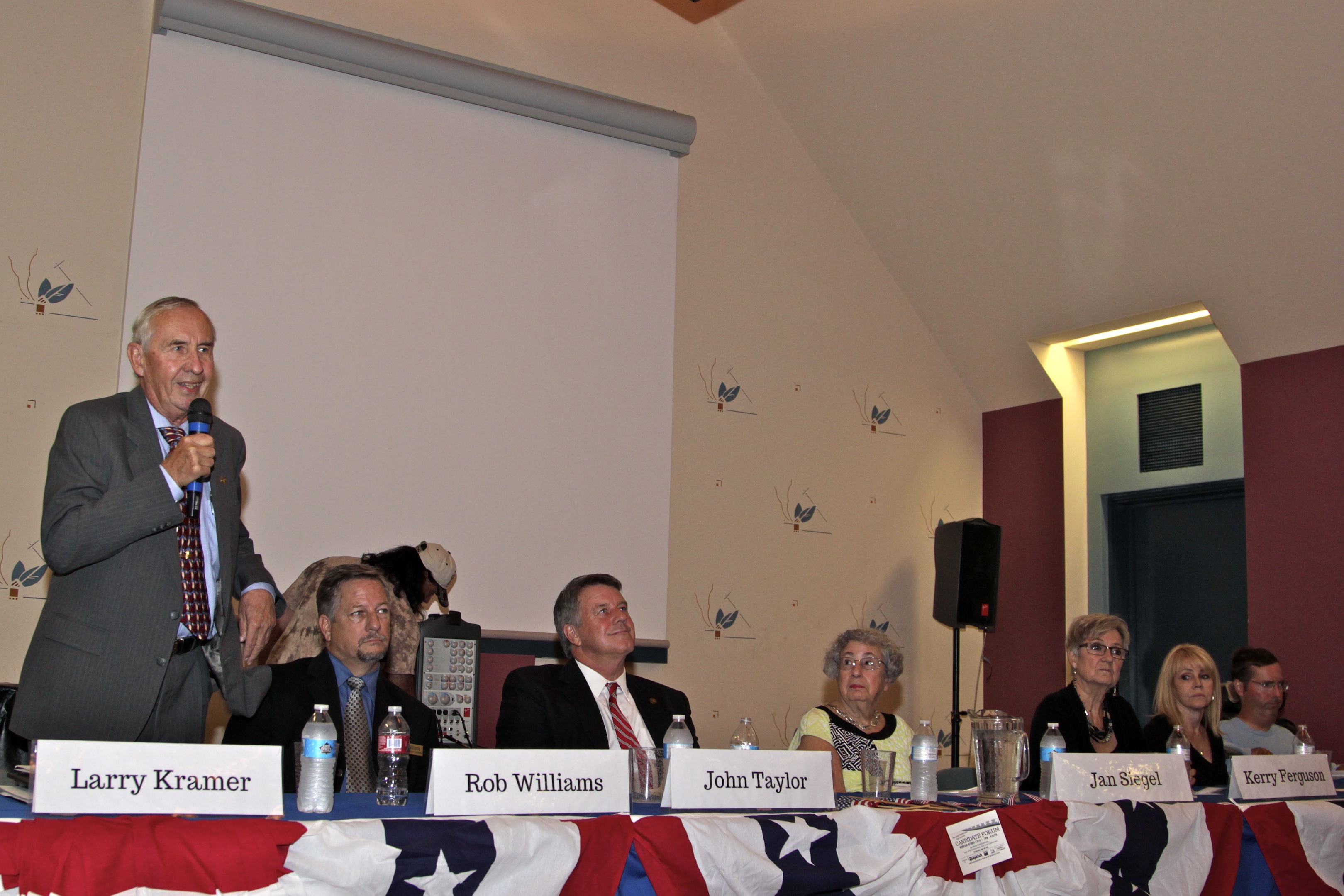 Three major development proposals and water were among the hot-button topics discussed by the San Juan Capistrano City Council candidates during a forum Wednesday night.

The candidates were each given time for opening and closing statements and one minute to answer a series of questions submitted by residents and screened by the League of Women Voters.

The candidates were asked for their opinions on three hotly-debated projects, the San Juan Hotel & Villas, the Laguna Glen retirement community and The Shops at Capistrano.

Rob Williams, an architect who formerly served on the Planning Commission, said all three needed considerable work to fit the city.

“If (the developers) work with us, they could be very good projects,” Williams said. “The important thing is what we want in San Juan, not what the developer wants.”

In response to a later question, Williams said he did not support the current design of the hotel nor townhomes abutting Historic Town Center Park.

Councilman John Taylor supported the proposed retirement community. He noted that the environmental impact report for the project showed no impact to the community, although the Planning Commission rejected the study Tuesday, saying it wasn’t thorough enough.

Taylor said the city is aiming to improve pedestrian traffic in downtown, and although he supports the hotel, he felt the residential component of the project did not create a walkable experience.

When she announced her candidacy, Jan Siegel, an active community volunteer and local historian, said she was motivated to run because of The Shops project. Wednesday, she called the project “totally inappropriate at this time and certainly does not fit into what any of us really want next to the most significant landmark in Orange County.”

Siegel said a hotel was needed in downtown and that the city needed to continue working on the project. She felt the retirement community was a “good use for the land.” She noted that critics of the project, many who leave nearby the proposed site, would like to preserve the land as agricultural, even though their homes were once farm land.

Kerry Ferguson said although all the projects were designed well and had “great purpose,” she objected to their scale and placement in or nearby historic areas.

She refuted Taylor’s recital of the Laguna Glen traffic study, saying that the community would generate 1,759 trips per day.

“That is a lot of trips. Frankly, as someone who travels Del Obispo, I honestly don’t want to be behind those cars while I’m waiting for the train,” Ferguson said.

Pam Patterson said all three needed to comply with the city’s General Plan. “That’s not happening here,” she said. “The General Plan is about open space, preserving our agricultural heritage and our historical heritage.”

Councilman Derek Reeve said although he is a “firm believer in property rights,” developers did not have a right to change zoning. He said he was “absolutely, fundamentally opposed” to the Laguna Glen project and was against residential units downtown, as part of Urban Village’s San Juan Hotel & Villas proposal.

On The Shops, Reeve said based on its last presentation, the project was unacceptable because “it is nothing more than a strip mall. San Juan deserves better.”

Councilman Larry Kramer noted that he was the lone vote against The Shops, saying his ideal project would be one that better suited the Mission and created a pedestrian-friendly environment.

Kramer said he supported the San Juan Hotel & Villas project but that the homes were too dense. He said Laguna Glen was “fundamentally a good project” but was too dense and required a new traffic study.

In response to a question about regionalizing water and control of the city’s controversial Groundwater Recovery Plant, the incumbents stood by their long-standing opinions.

Reeve, a frequent opponent of the plant, highlighted the increasing difficult of pumping water out of the San Juan Basin during the drought. He said salt water intrusion has made it difficult for the plant to produce its intended output, leading to increased rates. Ferguson and Patterson also criticized the city’s continued operation of the plant and water pumping in the basin.

Kramer, who supports the plant, said the basin was being monitored for its water level and any salt water intrusion. He and Williams both said the plant protected San Juan’s water source.

Siegel said the city also needed to be concerned with aging water infrastructure, including underground pipes.

When asked about San Juan’s transient population, the candidates all praised the new Sheriff’s Department liaison assigned to communicate with the city’s homeless.

Williams and Patterson said establishing a shelter was only a temporary fix. They, along with Ferguson and Siegel, said non-governmental agencies would be better suited to help the homeless recover.

When asked about what the city could do to better serve the youth, the candidates praised the Boys & Girls Clubs of Capistrano Valley and other groups, like the nonprofit Great Opportunities and the city’s Youth Advisory Board. Williams said the city had to do a better job at maintaining its parks.

The candidates all supported a skateboard park for kids, an issue raised in Dana Point, where residents have petitioned for a facility.

Stephanie Frisch was unable to attend the event due to a prior engagement. She was, however, allowed to submit a statement, read by the League. In it, she highlighted her experience as a small business owner and member of the Chamber of Commerce’s executive board. She said she would focus on increasing parking in downtown, responsible development, fostering a business-friendly environment, working with law enforcement agencies to improve safety and maintaining the city’s cultural heritage and open space.