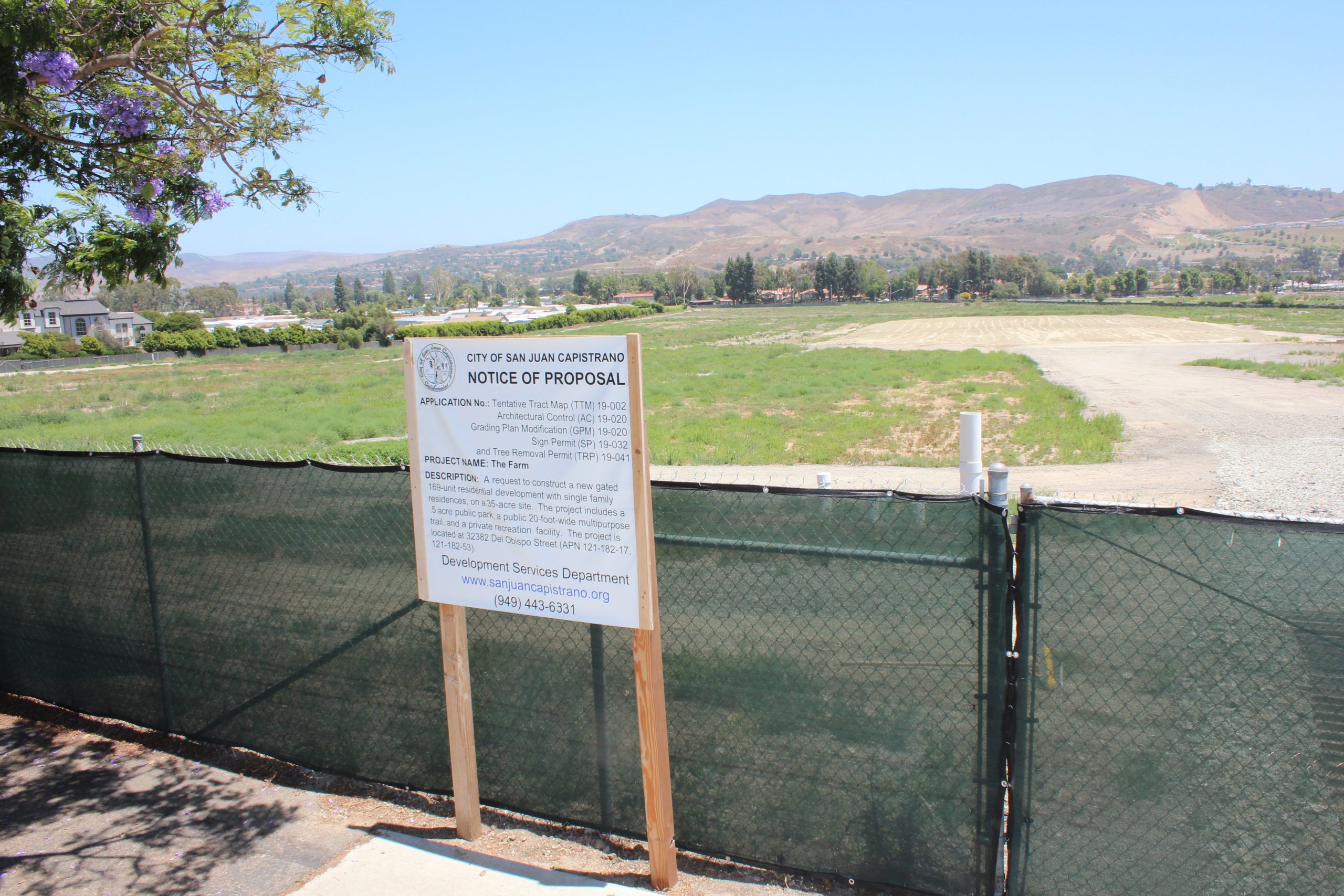 City Council Moves Ahead on Housing Development Amid Community Criticism

Amid criticism from residents over a housing development in the works, the San Juan Capistrano City Council approved steps to move forward on the project during a council meeting on Tuesday, July 7.

The proposed housing development is called The Farm and will be located near Armstrong Garden Centers, Kinoshita Elementary School, and Mountain View Church. The official address is 32382 Del Obispo Street, and the site is currently vacant property.

Lennar Homes is the applicant for The Farm, which would be a gated, 169-lot, single-family detached, residential home subdivision on 35 acres. The subdivision would also have a park, trail, recreation facility, and private roads. There will be a maximum of 180 residential units.

Residents who spoke up in person at the meeting, and others through written correspondence with city officials, took issue with several aspects of the planned development, including how it could cause more traffic, the underwhelming design of the homes, and overdevelopment.

Sue Turner said she was disappointed with the home designs.

“This is one of the last historical properties being developed in our town. Can we not do better?” Turner said. “I feel we’re accepting mediocrity. I just don’t see anything special in the design of these homes that reflects the historic nature of our city.”

Some people who live in Rancho Alipaz, a nearby mobile home park, also spoke against The Farm, saying they think the homes could enable residents to look into their homes at Rancho Alipaz. Developers for The Farm have met with Rancho Alipaz residents to hear about concerns. Lennar Homes and city officials came upon the compromise of filling in gaps with trees, as needed to address privacy concerns, pending approval from the property owner of Rancho Alipaz.

Andrew Han, director of forward planning for Lennar Homes, addressed some of the concerns. Han said traffic impacts have been analyzed and would not exceed previously approved plans. Han also said many people are working from home during the COVID-19 pandemic, and parents would be able to walk kids to school given the subdivision’s proximity to nearby campuses.

Han also addressed privacy concerns from Rancho Alipaz residents, saying Lennar Homes has been “very transparent from the beginning,” with multiple meetings and communications with the residents of Rancho Alipaz. Han also mentioned trees on the Rancho Alipaz side.

“The trees block the line of sight for someone sitting on the second floor of the homes on our side looking into the mobile home park,” Han said. “There’s a visual barrier. That issue, for the most part, resolves itself.”

Council members voted, 4-0-1, to approve the tentative tract map and addendum to the Mitigated Negative Declaration, which analyzes the project’s environmental impacts pursuant to the California Environmental Quality Act. Councilmembers John Taylor, Derek Reeve, Brian Maryott, and Sergio Farias voted yes. Mayor Troy Bourne recused himself from the discussion and the vote, because he is personally familiar with the developers.

Reeve said they were in the final planning stage of the project and finishing touch-ups during the July 7 meeting. The project has been in the works for years.

Maryott said the designs presented were underwhelming, but the economic factor is what’s important. The modest size of the amenities is underwhelming considering the number of proposed households, Maryott said.

“There’s nothing breathtaking about this,” Maryott said. “But if the homes get sold, that’s what matters.”

Grading work is expected to start in late fall, and vertical construction in summer of next year. The project could take about four years to complete.