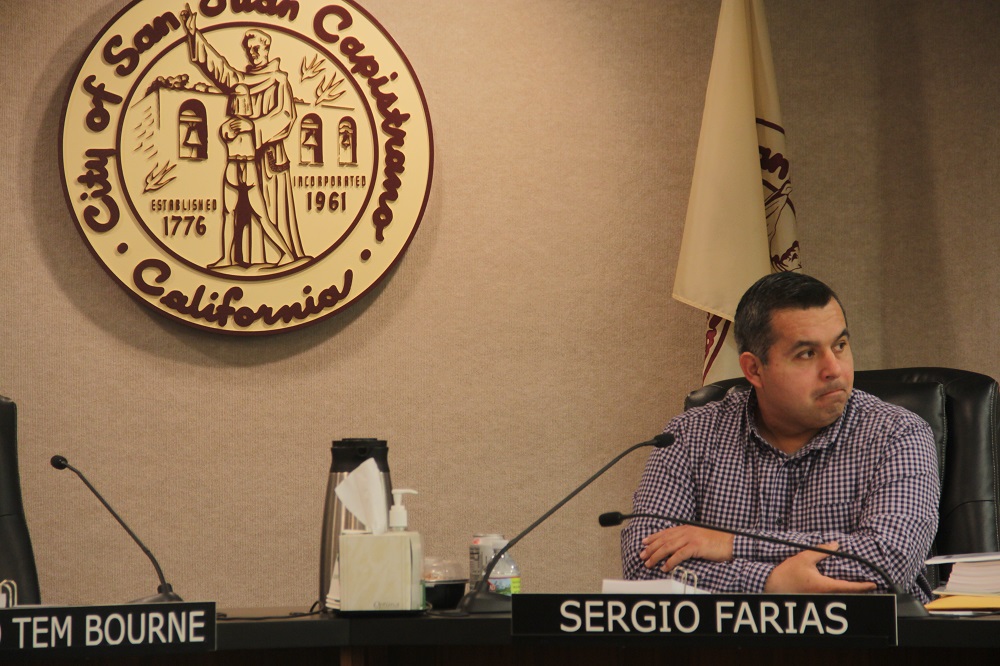 A resolution by the city to condemn oil drilling off California’s coasts is expected to be introduced to the City Council next month.

Councilmember Sergio Farias has been working with Oceana, an ocean conservation advocacy group, on drafting the symbolic resolution, which, if passed, would add San Juan Capistrano to the chorus of other municipalities that have voiced opposition to offshore drilling in the Pacific.

It’s a “good message to send that San Juan Capistrano wants to protect our natural resources,” Farias said, noting that while the city is landlocked, it has close proximity to the ocean and that several creeks in San Juan Capistrano empty into the Pacific.

Oil drilling off Southern California’s coasts could greatly impact tourism and fishing, which are vital industries in the region, Farias said.

“I think to put in oil platforms potentially anywhere near our oceans would cost us more than what you would extract, because people aren’t going to want to go the oceans,” he said.

According to a report from the National Oceanic and Atmospheric Administration (NOAA), $1.7 trillion of California’s gross domestic product in 2012 was generated from the state’s 19 coastal counties. Those same counties also generated $662 billion in wages.

In 2015, Orange County’s ocean economy had a GDP of nearly $4.3 billion, according to NOAA. Much of that was attributed to the county’s tourism and recreation sector, which employed 44,240 workers, generating nearly $2.23 billion in GDP and more than $1.09 billion in wages.

“It shall be the policy of the United States to encourage energy exploration and production, including on the Outer Continental Shelf, in order to maintain the Nation’s position as a global energy leader and foster energy security and resilience for the benefit of the American People, while ensuring that any such activity is safe and environmentally responsible,” the order stated.

In conjunction with the order, BOEM is also tasked with updating the National Outer Continental Shelf Oil and Gas Leasing Program, which “establishes a schedule of oil and gas lease sales proposed for planning areas of the U.S. Outer Continental Shelf (OCS)” and “specifies the size, timing, and location of potential leasing activity.”

In response to Trump’s executive order, more than 80 coastal cities in California, Oregon and Washington have passed resolutions supporting a ban on offshore oil and gas drilling in the Pacific’s federal and state waters, according to Oceana.

Costa Mesa, Laguna Beach and Dana Point are included in the growing list of cities to come out against Trump’s plans to expand oil drilling. The city of Hayward in Northern California earlier this month became the latest city to pass a similar resolution against the expansion of oil drilling.

Amid the partial federal government shutdown, Trump recently ordered dozens of federal employees to return to work in order to continue working on the Lease Program update, The Hill reported.

Gov. Jerry Brown last September signed a pair of laws to block offshore drilling in California, thwarting the president’s plans. The laws are meant to bar pipelines, piers and wharves from being constructed to extract oil and gas from federal waters, according to the Los Angeles Times.

Farias acknowledged that while the resolution is symbolic in nature, it’s important for the record to show where the city stands on the issue.

“I think it’s important to show that at the local level, the things that we value,” Farias said. “So, whether we’re in alignment with the state or not, it’s important for the local agencies to show where we stand.”

Farias said the resolution is ready to be introduced, and he’s hoping to get it on the agenda for the City Council’s February meetings. However, with a lot of other agenda items scheduled, it could delay the introduction, he said.

“I don’t want to delay it past (February),” Farias said, adding, “There’s been a couple of changes on the agenda that could push it back.”