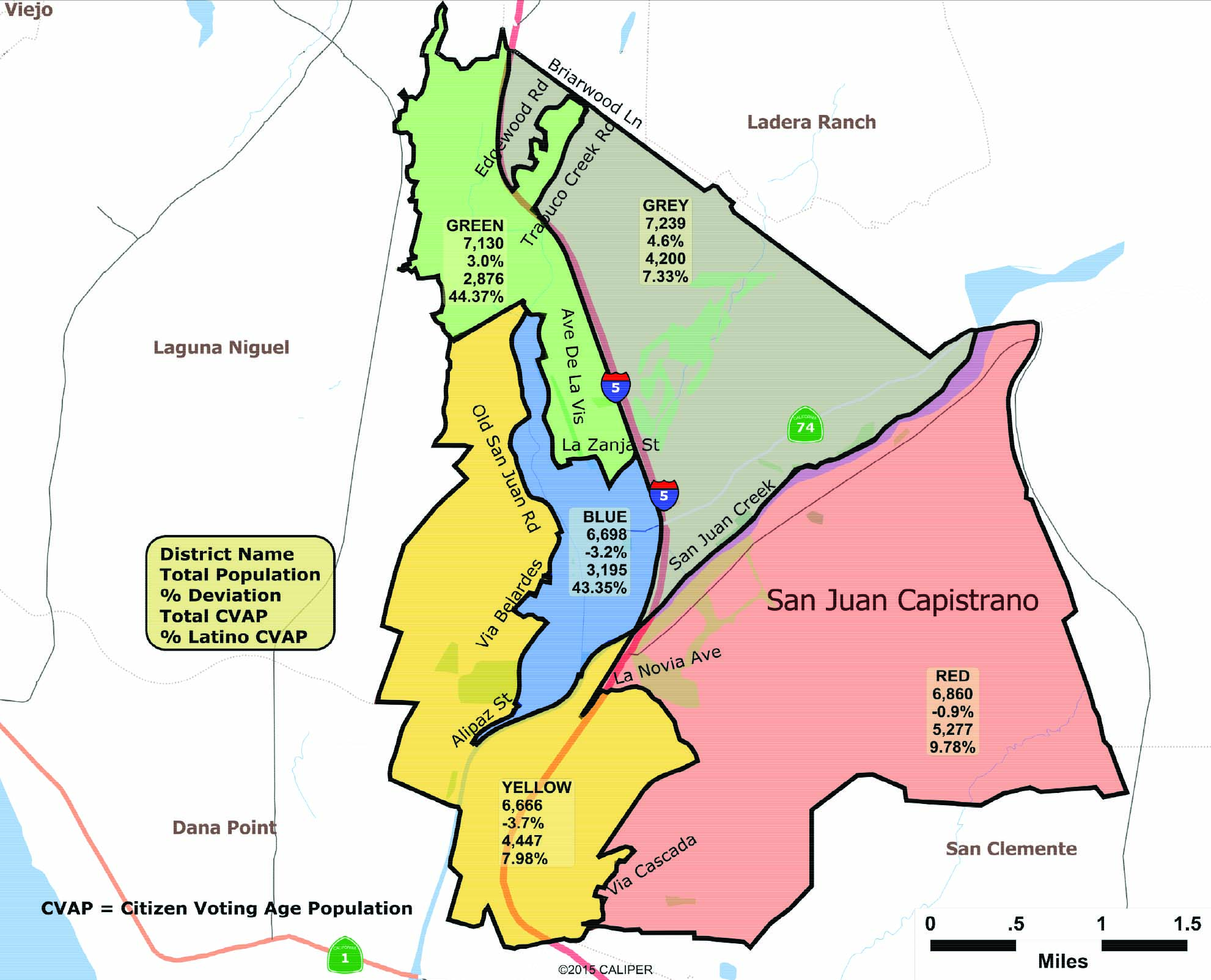 The City Council reviewed the first draft of a map of five voting districts at its May 18 public hearing and gave direction to demographers to work on some additional options during the upcoming districting community forum on June 1 and public hearing on June 6.

The next two June meetings represent the last leg of public outreach that began in May regarding the city’s transition from at-large City Council elections to by-district elections, which will take effect during the next election on Nov. 8. Under the new system, voters separated into districts within the city will vote for a Council candidate who lives within their respective district.

The city’s switch to district elections—which was approved unanimously by the Council in February—was prompted by a voting rights lawsuit filed against the city in January claiming San Juan’s at-large elections violated the California Voting Rights Act of 2001 and resulted in vote dilution for Latino residents.

Following the direction of City Manager Ben Siegel and City Attorney Jeffrey Ballinger, the City Council commenced with the transition and voted unanimously April 19 to allocate $70,000 from the city’s general fund to pay for a demographer and community outreach services in order to begin the process of mapping out voting districts.

According to the city’s legal firm, Best Best & Krieger, the city has entered into a stipulated judgement with the plaintiffs of the voting rights lawsuit. Pursuant to the agreement, the two expiring Council seats of John Perry and Sam Allevato will be up for election on Nov. 8, and the other three seats will be up for election in November 2018.

Attorney Cristina Talley said the district with the highest percentage of Latino voters will be one of the two districts that will vote for a Council member this November. The second district, Talley said, will be chosen during a future City Council meeting.

The June 1 community outreach meeting will run from 6:30-8:30 p.m. at the Community Center, located at 25925 Camino Del Avion. Residents are encouraged to attend to build upon or suggest edits to the draft voting districts map.

Final consideration of the districts will take place at the June 6 City Council public hearing, which begins at 5 p.m. at City Hall, located at 32400 Paseo Adelanto.

The city’s final plan is due to the Orange County Registrar of Voters by July 6.

Beyond submitting your input in person, residents can send their comments to the City Clerk via mail to: 32400 Paseo Adelanto, San Juan Capistrano, CA 92675, or via email to districting@sanjuancapistrano.org.

For more information on the city’s districting process, including an interactive map and recordings from previous meetings, visit districting.sanjuancapistrano.org.