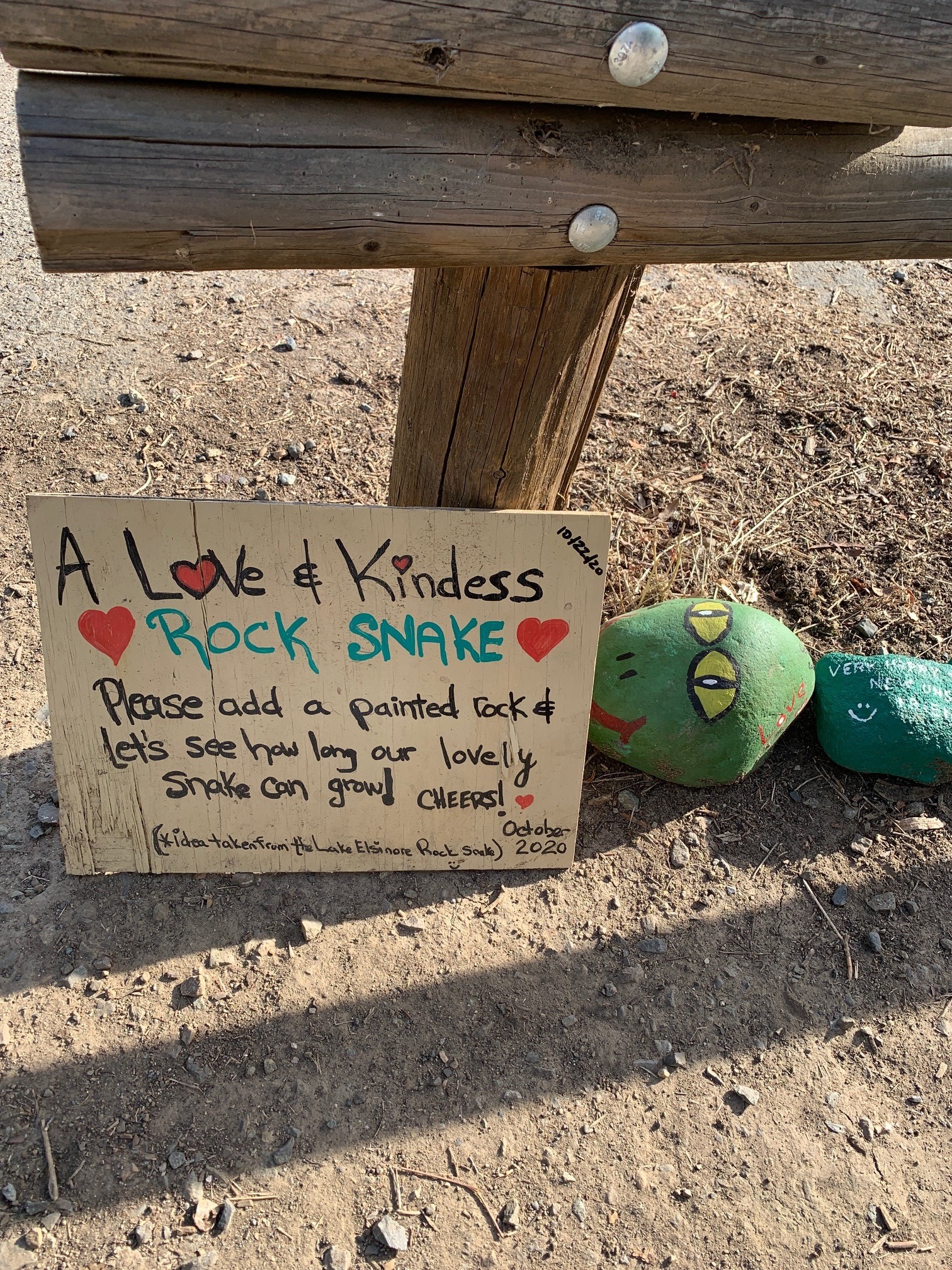 Featured photo: A “rock snake” of inspirational painted rocks was placed on Peppertree Trail before being removed, which has drawn backlash from the community. Photo courtesy of Ping Lam.

City leaders and staff in San Juan Capistrano have pledged the return of a visible trail of inspirational rocks for the community, after the controversial removal of a well-known “rock snake” following a residential complaint.

Staff with the Public Works Department removed the long line of colorful rocks adorned with feel-good messages from the Peppertree Trail on Thursday, Oct. 28, due to a complaint that the rocks were unsightly and not permitted—which caused an outcry among residents. The rock snake was started by Herb Langefeld, a local resident who is confined to a wheelchair due to cerebral palsy. City officials were not aware of the removal beforehand.

“I know I speak on behalf of the city council when I say we appreciate all of the emails and heartfelt messages we’ve received from the community and the neighbors over the past several days,” City Manager Ben Siegel said during a council meeting on Tuesday, Nov. 2. “I think they’ve done a very effective job of describing what the rock snake, placed over the past year during the pandemic, meant to the community.”

Herb Langefeld was at the meeting, and he cried at different times. His sister, Heidi Langefeld, accompanied Herb to the meeting and spoke in support of the rock snake returning.

“The last rock that was added before it got removed was Herb’s that he painted, the happy one-year anniversary,” Heidi Langefeld said. “It had been there one year and almost one week before it got swept away. At that point, it was 277 feet long, which equates to over 1,300 rocks—of which Herb maybe painted 30. That tells you the contribution to not only our neighborhood, but all the people that walk that trail, the bikers, (people) on their horses.”

Heidi Langefeld and other residents said the rock snake makes people happy when they walk by. Andrew Hoffmann, a neighbor who lives across the street from the rock snake’s location, said the rocks are Herb Langefeld’s way of communicating with the community.

“He would do these little rocks, and you’d see it, and he’d say hello to people,” Hoffmann said. “He’s trapped inside, talking to us through these rocks. So the snake went away, and I was like, wow. I don’t think we want to be the heartless town. There’s no harm in it. Anybody that’s protesting (that) there’s liability concerns—it’s completely unjustified. No one’s tripping over these rocks. They are set aside.”

The rocks were returned to the Langefeld family after the removal.

“I understand the frustration among many neighbors and we will be working with those neighbors to, hopefully, identify an appropriate long-term home for the rock snake,” Siegel said.

Councilmember Howard Hart tabled a motion he placed on the meeting agenda to direct city staff to prepare a policy that would establish a process to allow privately funded art to be installed at city-owned and maintained public spaces, which mentioned permitting the rock snake on Peppertree Trail. Several residents spoke in favor of more public art in town, including members of The Alliance for San Juan Art—a nonprofit established by resident Rich Heimann.