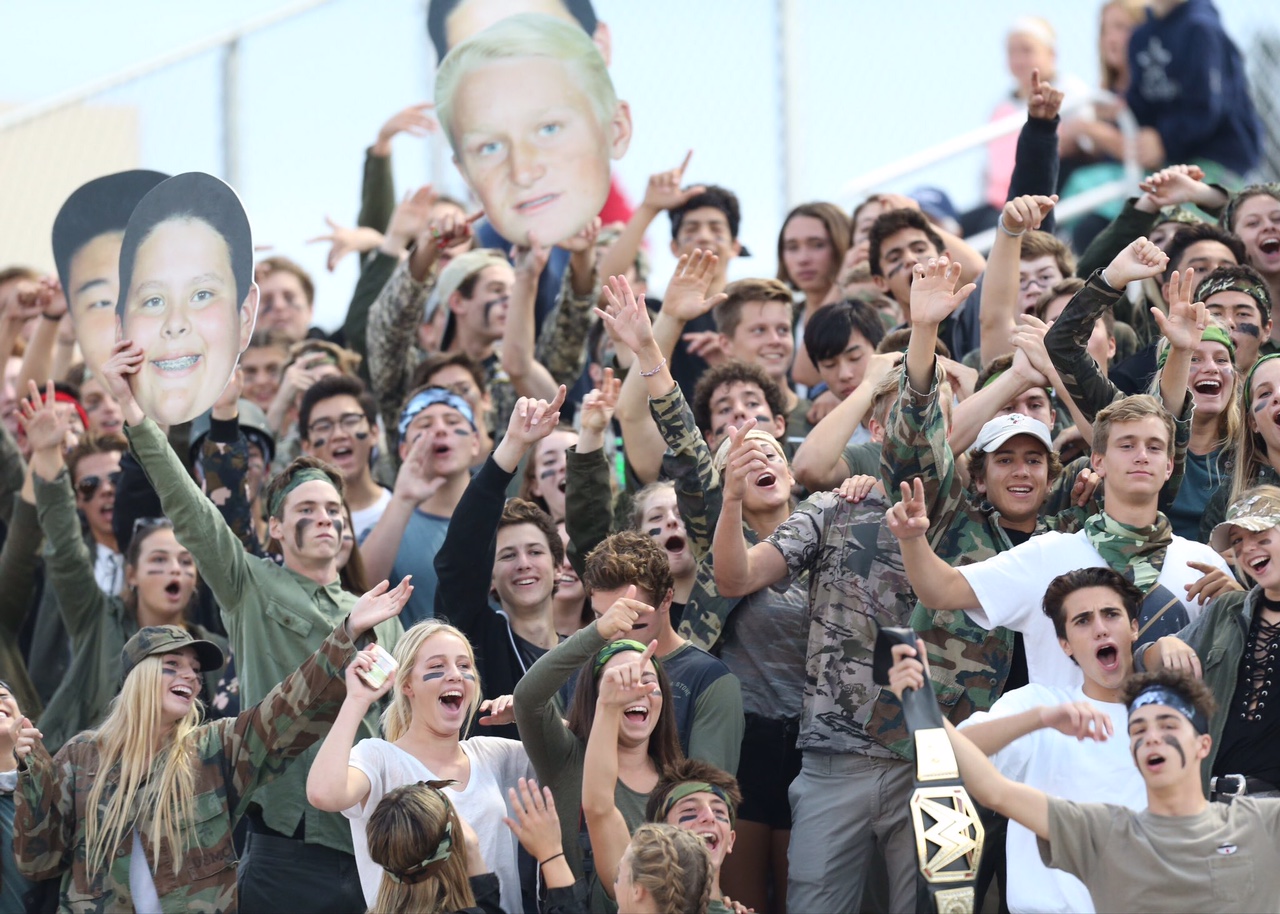 Some in the cast of characters one can find in the student section at St. Margaret’s home football games include the following: A kid dressed like a giant pizza, an uncooked turkey, a huge bag of coffee grinds, a donut and a tin of Spam.

During games, the costumed students belt out coordinated cheers praising their team and playfully jeer the opposition. They serenade the crowd with versions of Neil Diamond’s classic “Sweet Caroline,” which is a favorite in their repertoire.

Sometimes, St. Margaret’s faculty will dress up in costumes and race students around the field while the whole stadium cheers them on. It’s like the Milwaukee Brewer’s famous Sausage Race, only with your local American history teacher wearing a giant Mountain Dew can.

The spectacle on display every Friday night is just another day in the office for a devoted group of St. Margaret’s students known as “The Kitchen,” who show up to every game ready to cheer on the Tartans in a variety of unique and fun ways.

Student cheering sections have become a phenomenon in southern Orange County high school football in recent years, and St. Margaret’s prides itself on being one of the most crazy and vocal collections around, despite the small size of its student body.

The group’s name does not have any significant meaning, according to student organizers. St. Margaret’s doesn’t have the luxury of a recognizable mascot like other schools. What is a Tartan? Turns out it is a wool cloth woven into a plaid pattern. Not exactly an intimidating sight to behold on a football field.

The name is basically meant to spur questions and conversation amongst opposing student sections and fans. The Kitchen crew loves the fact that anyone who has to ask where they got their name will never truly understand. Ask any one of the five St. Margaret’s students in charge of the operation why they’re called The Kitchen, and the answer is always the same.

“Because (The Kitchen) is random,” junior Peter Gottlieb explained. “That’s just our main thing, to be random and have fun.”

Gottlieb, along with seniors Tyler Horgan, Nick Hanna, Brennan Campbell and Mitchell Hart have taken on leadership roles in The Kitchen. Call them the chefs de cuisine, if you will.

The group is in charge of creating new themes for each game and making sure there are ample amounts of costumes, signs and cut-out posters of Tartans’ players to go around. On Wednesdays, the group heads to local party shops and returns to campus armed to the teeth with supplies for game day.

The group is known for dressing up as food items, but they have conducted a red-out night, where students are encouraged to wear the Tartans’ home colors, military night, and are planning on wearing pink to support breast cancer awareness at the team’s Oct. 28 game against Brethren Christian.

The Kitchen, in conjunction with other clubs and groups on campus, are raising money to donate to breast cancer awareness programs this week.

Aside from providing hijinks and laughs in between plays, The Kitchen is meant to serve a purpose, and that is to give the Tartans a home field advantage. At St. Margaret’s field, there is only one side of the stadium with bleachers, and the opposing team lines up on that side. That gives The Kitchen a great vantage point directly behind the opponent’s bench.

“They can definitely hear what we’re chanting and saying,” Campbell said with a laugh. “The opposing teams’ players and coaches always get mad at us.”

It’s all in good fun, of course. The Kitchen uses social media, like Twitter and Instagram, to reach out to other schools and create friendly rivalries. They’ll exchange barbs back and forth with other student sections, hoping their fellow students will get excited about going to the game. The Kitchen has 525 combined followers between its Instagram and Twitter accounts.

St. Margaret’s may have a small high school student body, but they show up to games in droves, even when the team is on the road. On Sept. 17, the Tartans travelled to play Bishop’s of La Jolla, located roughly 60 miles away. The Kitchen helped organize student rooter buses to the game, and had over 100 students sign up and make the trip.

“We’re all very passionate and excited during games,” Horgan said. “I think everyone at our school, they just love being loud and have a good time doing it. They’re constantly screaming until their lungs make them stop.”

The Kitchen plans on pulling out all the stops at next week’s homecoming game against Crean Lutheran. The theme will be superhero night. Expect to see a few Superman and Batman costumes in the stands, and, of course, a kid dressed like a pickle, ramen noodles, and a big strip of bacon.