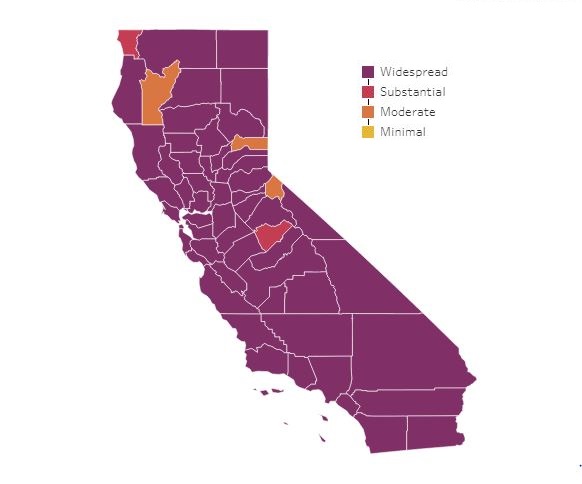 As the state edged up to 5 million coronavirus vaccine doses administered, the COVID-19-related death rate in the state and Orange County finally turned to a decreasing number to match the continued considerable drops in case rate, transmission rate and hospitalizations in the state’s reported numbers on Tuesday, Feb. 9.

For the first time in nearly two months, the death rate statewide and locally has finally taken a decrease.

The state reports an adjusted case rate, which is adjusted for the volume of testing. The unadjusted rate is 29.7 daily new cases per 100,000, down from 43.1 last week and from 66.1 two weeks ago.

The county saw a drop in its testing positivity, as the countywide number dipped to 9.4% from last week’s 10.9%. The metric was at 12.9% two weeks ago. The threshold for the purple tier is 8%.

The county’s health equity positivity rate was reported at 12.4%, down from last week’s 13.9% and the 16.6% of two weeks ago. The threshold for the purple tier is 8%. The health equity rate measures the testing positivity in a county’s low-income and more racially diverse neighborhoods.

To move back down to the red “substantial” tier, Orange County would need to have its metrics at red levels for two consecutive weeks. The red tier requires the case rate to sit between 4.0 and 7.0, the testing positivity between 5.0% and 8.0% and the health equity rate between 5.3% and 8.0%.

There are still 53 counties in the purple tier, two in the red tier, and three counties in the orange “moderate” tier. One county (Del Norte) dropped from purple to red.

Statewide, the testing positivity continues its sharp drop as well with a 5.6% 14-day testing positivity rate in California, the state’s lowest number since Nov. 22. It’s a decrease from last week’s 7.2% 14-day average and the 9% of two weeks ago.

Those dropping positivity rates are good news for the state’s hospital system, for which the outlook continues to improve.

Nationally, the United States now tops 27 million coronavirus cases. There have been 465,072 deaths in the United States, and the national seven-day average testing positivity is at 6.89%, down from 7.97% last week and 9.08% two weeks ago.